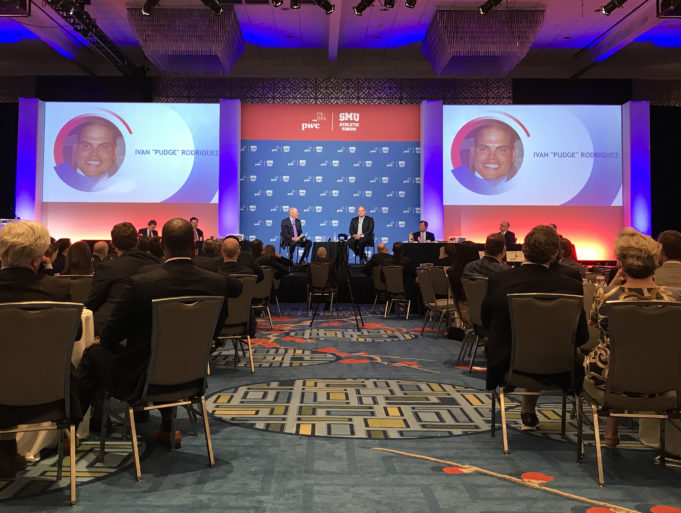 The column today is an excuse to share some great baseball stories. It’s baseball season, and if you’re a local baseball fan, hearing tales of the Rangers from the likes of Tom Grieve and Iván “Pudge” Rodríguez probably never gets old.

The stories got told at the PwC SMU Athletic Forum earlier this month. The format involved Grieve asking questions of Rodríguez. It’s an interesting pairing. Grieve is a longtime Rangers broadcaster, and the two sometimes work on the same Fox Sports Southwest telecasts. In the 1990s and early 2000s, Grieve analyzed a lot of opposite-field doubles, frustrated baserunners, and general baseball excitement engineered by his co-worker. Their most important collaboration, however, came early in Rodríguez’s playing career, when then-GM Grieve and his staff identified, signed, and developed the Hall of Famer.

They talked about how Rodríguez arew up in small-town Puerto Rico, and fell in love with baseball there. He originally was a pitcher, and Grieve asked him about another pitcher who later changed positions, too.

“Juan was a pitcher, too, and we had this rivalry together between me and Juan. I was a power pitcher and Juan also throws very fast. And every time we faced them on the weekend, Juan’s team, and Juan is pitching and I’m pitching on the other side. The game was always 1-0. I beat Juan 1-0, or Juan beat me 1-0, or I hit a home run against Juan or he hit a home run against me.”

The Juan in question later became an outfielder and hit 434 homers in the big leagues, many of them as Rodríguez’s teammate: Juan González. It’s still amazing that the two big leaguers both grew up in the environs of tiny Vega Baja, Puerto Rico, and that both signed with, and starred for, the Rangers.

Another of Pudge’s teammates always makes for good stories: Nolan Ryan. Rodríguez was 19 when he joined a 44-year old Ryan on the Rangers. Grieve explained one of the reasons the legendary pitcher enjoyed playing with his young batterymate.

the runners a chance – and he knew that he didn’t have to worry about that with you back there,” explained Grieve.

thing that I did.”

The comment drew a laugh from the crowd, and the catcher related what happened when Ryan motioned him out to the mound.

Grieve went on to explain that pitchers don’t like it when a catcher just tosses the ball back to the pitcher when a runner has a big jump, “because what he’s saying to everyone in the stadium is ‘That’s not my fault. The pitcher didn’t give me a chance.’”

Rodríguez also discussed a better decision he made with Big Tex on the mound.

“When you throw 98, as a catcher what are you going to do? You put that down,” he said, pointing his right index finger downward to demonstrate how one calls for a fastball. “That was a smart thing to do.”

Another baseball legend came up as the pair discussed Rodríguez’s Hall of Fame induction, which Grieve attended. After the ceremony, the newly inducted catcher attended a dinner for all the Hall of Famers in attendance. There, he met up with one of the few men who had played his position at his level.

“Johnny Bench was sitting on a chair, and he calls me, and he says, ‘Pudge, come over here for a second,’” Rodríguez explained. “He told me ‘Pudge, I want you to listen, but not say anything. Just keep it inside. But think about where you are. Think about what you accomplished in your life. Think about what you did in baseball’ . . . and after that he said, ‘Congratulations, kid. Welcome to the Hall of Fame.’”

Bench had been Rodríguez’s baseball hero growing up, and the message resonated. “I’m never going to forget that for the rest of my life,” Rodríguez said.

When you forge a Hall of Fame career, you generate a lot of unforgettable stories. Some you tell yourself. Others remain in the memories of fans and colleagues. Grieve related how much he appreciated getting to watch Rodríguez’s games as a team executive and broadcaster. Emcee Scott Murray told the crowd how much he had enjoyed getting to cover the catcher during Murray’s sportscasting days. I suspect that they, like Rangers fans, never get tired hearing about a homegrown Hall of Famer.