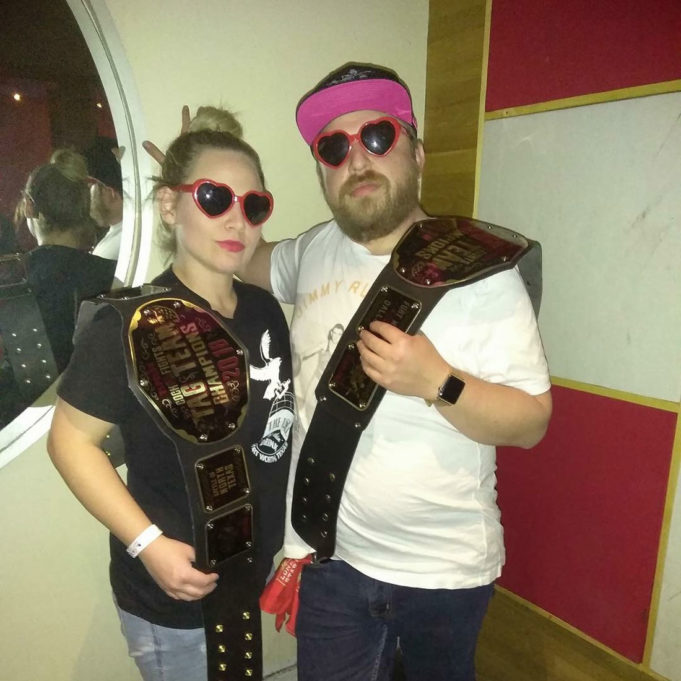 When you choose to imbibe at The Usual, you’re going to get an expertly balanced, meticulously crafted cocktail served with a smile and maybe a little schooling on the origins of the drink. What you may not know, however, is that the people behind the bar are so good at what they do, a couple of them are heading to New York City to play in the big leagues.

Later this week, The Usual’s head bartender, Jason Pollard, and Braeden Knight, a food scientist who tends bar off and on at the Magnolia Avenue stalwart, will be representing the Fort in the national finals of the Espolón Cock(tail) Fights, a competition produced by the United States Bartenders’ Guild. To qualify, the pair already beat out local competition at a tag-team style event (pairing two bartenders together) that took place earlier this year at the 81 Club at Billy Bob’s Texas in the Stockyards.

After entering a cocktail recipe online in the first phase of Round 1, Pollard made it through and selected Knight to be his partner, and together they beat out a team of Dallas drink slingers to advance to Round 2.

“I was blindfolded and had headphones placed on my head while [Knight] selected ingredients that she thought I might be able to use to come up with a drink on the fly to match a handful of descriptors drawn at random,” Pollard explained.

They breezed past their competitors again by keeping it “straightforward, direct, and not too fussy,” he said – not unlike the makings of a good martini.

For the final round, two Fort Worth teams were left. (Take that, Dallas!) The finalists were then asked to create a drink that epitomized that phrase “The city you represent.”

The pair must know this city well because they earned top marks with their Fort Worth-themed quaff. While Pollard couldn’t quite recall the exact ingredients he used, he knows it involved Cynar (a bittersweet artichoke liquor), bitters, and the requisite Espolón tequila. You’ll find those ingredients in many of The Usual’s signature menu items, like the Maxi-Millian-Aire (reposado tequila, cynar, agave, grapefruit bitters, and ouzo) and the Dark Passenger (a Cynar shooter served alongside a can of lager).

Winning first place earned Pollard and Knight a trip to Mexico, where they visited the Espolón Tequila Distillery along with winning teams from the other regional events. The trip likely provided lots of inspiration for the boozy concoctions they’ll have to create when they compete Fri, Nov 16, against bartenders from as far afield as Austin, Boston, and New Orleans — in other words, cities that really know how to handle their hooch.

The format and grand prize of the national event are still a secret, and Pollard expects “there will be lots of surprises thrown our way.” Whatever happens, it’s clear the team has stuck with the “happy to be here” approach that served them well in earlier rounds.

The Espolón Cock(tail) Fights are open to spectators, so if you happen to be in NYC this Friday, go cheer on our local team. Otherwise, you can wait for the annual competition to swing back around these parts next year — likely sometime in April. In the meantime, drop by The Usual’s weekday happy hour ($2 off all drinks ’til 7pm) to taste a little of the home team’s nationally acclaimed libations for yourself.