If only Chimay-level beers were sold at Lone Star Beer prices. That would solve one lingering problem for singer-songwriter Jacob Furr and countless artists stricken with top-shelf tastes and tight budgets. We did start our interview over Wild Acre Brewing bocks, though.

“Drinking on a musician’s budget often means asking the bartender, ‘What’s your three-dollar beer?’ ” he said with a laugh.

Furr has likely performed at every brewery in the 817 by now. He enjoys the beer folk and the often generous fees for the three-hour performances. When touring, he peppers his long drives with brewery gigs. Locally, his weeks are booked with evening performances at bars and restaurants. The songwriter has an interesting outlook on his career and life in general. At times, he describes the economics of being a professional musician in a pragmatic, matter-of-fact manner. But he’s also deeply mindful of the social and technological trends that influence how musicians and other artists interact with their fans.

“For independent musicians, there are more options for us” to reach listeners, he said. “Because of that, our listeners have more options too. I can’t dump $50,000 into a public relations campaign” when I release an album.

The pensive songwriter doesn’t plan to sell out, but he did joke about what that could look like. The online music streaming world has its own version of Search Engine Optimization techniques, he said.

His newest single, “Return,” was written in 2017 while on tour with Ryan Tharp and two other bandmates. The song was recorded by Tharp in a new studio, Rockhill Studios, that was recently founded by Furr and Tharp. Later this year, Furr aims to release a 10-song longplayer.

Return “is a follow up to the last single I put out,” Furr said. “Until my album is ready, I’m going to eek out stuff and remind people that I’m still here.” 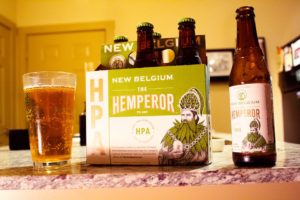 C’mon, we all know that hops (Humulus lupulus) smell like pot (Cannabis sativa) and visa versa. The two plants fall under the family Cannabinaceae, but the significance of their relation remains debated. Colorado-based New Belgium’s The Hemperor, brewed with hemp, recently hit North Texas shelves. My first whiff revealed heavy notes of marijuana. (Disclaimer: The beer contains no CBD or THC.) The IPA (HPA in New Belgium parlance) is dank. And resiny. A nonfan of IPAs might say that the beer taste like fermented pinecone juice. I liked it, but I’m still on the lookout for CBD beers to hit Texas shelves. Most of the ones being brewed are alcohol-free, meaning your two favorite vices will have to be enjoyed separately. At least for the near future.

Come out and enjoy some barbecue and a cold Wild Acre Beer at my first brick-and-mortar! Visit the event page here.