Fort Worth’s coolest teenage blues belter has moved to New York City for college but isn’t abandoning her music career. Claire Hinkle has barely settled into her new digs in the Big Apple and already landed a showcase at an iconic club. 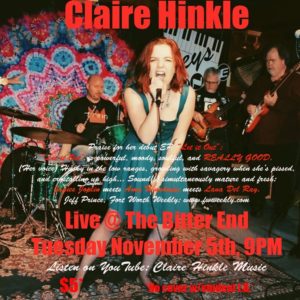 She will perform at 9 p.m. on Tuesday, November 5 at The Bitter End, a historic folk venue in Greenwich Village where Bob Dylan, Joni Mitchell, and other soon-to-be-famous musicians performed during the 1960s and ’70s, alongside comics such as Billy Crystal and Richard Pryor.

“It’s my first gig in the city I’ve dreamed about moving to since I was 12,” Hinkle said. “I hope this leads to more gigs and meeting more musicians. I want to learn and create with new people.”

To promote her gig, Hinkle created a poster that includes a blurb from my review of Let it Out in 2018 that described her EP as powerful, moody, and soulful and her voice as “husky in the low ranges, growling with savagery when she’s pissed, and crystalline up high.”

The headline is a reference to the purposeful stuttering Hinkle uses (ala “My Generation”) during one of her songs, “American Beauty.”

Hinkle told us about her impending move to New York City during a recent appearance on Toast & Jam.