The 2020 Bridgestone NHL Winter Classic presents a study in contrasts. One one hand, it’s about a lot of things other than hockey. And conversely, it seems like it’s all about hockey.

This league holds its signature New Year’s Day event yearly at a baseball or football stadium. It’s never gone to the same place twice, and this year’s version came to Dallas. Because the game goes a different site each year, the organizers try to give it a look and feel that helps the national audience recognize the locale. That effort involves elements that stretch way beyond hockey. The portion of local culture reminiscent of the American West got lots of play Wednesday, including a logo styled after an ornate belt buckle. The in-stadium entertainment menu featured State Fair fare like pig races, mutton busting, and the obligatory longhorn.

Music played a role, too, as it does at the Fair and in local culture. Texas band Midland played a pregame set. The 8tracks, from North Texas, served as the house band. And, perhaps in a nod to the visiting team from mainstream country mecca Nashville, nationally-known crooners Dan + Shay played during the first intermission.

And yes, the Midway was open, too.

Much of this hoopla, then, had nothing to do with the sport of hockey. But there’s more to the Classic than just hype.

Stars Foundation President Marty Turco and I bellyached a bit about the slightly chilly weather as we walked toward the Cotton Bowl Stadium before the game (which is amusing because it should have felt balmy to an Ontario native like the former All-Star goalie). I joked that we had a perfectly good indoor arena down the road. Turco pointed out that it (meaning the American Airlines Center) can’t hold 80,000+ people. As things had turned out, the league needed a Texas-sized venue.

At the 9:19 mark of the third period, PA Announcer Jeff K supplied the attendance number: 85,630 – a sellout. The league hadn’t put that many tickets on sale at first, not feeling confident about how a market known elsewhere for its trick ropers and mechanical bulls (the stadium floor housed both) would respond to an outdoor hockey game held on a traditional football day. The NHL swiftly had to adjust its numbers as tickets sold rapidly.

The sellout represented the second-largest crowd ever to watch a National Hockey League game. It also represented the largest crowd to ever watch a home game in the Cotton Bowl Stadium. Some Texas-OU games have drawn more, but those are neutral site games. The Dallas Tornado and FC Dallas never came close to filling the stadium. SMU football drew 75,504 for a 1954 loss to Notre Dame. The Dallas Cowboys’ first Thanksgiving game in 1966 stretched capacity to 80,259, but it wasn’t until 2008 that upper-deck upgrades made possible this size of crowd. That happened well after local teams stopped staging home games in Fair Park.

Even though the league does a lot of the legwork for an event of this magnitude, it was quite clear this was a Stars home game. I now know how Dorothy felt walking into the Emerald City, because the color green predominated. It was everywhere. There was one large pocket of Preds fans, but for the most part the seating section served as a repository for the world’s supply of Victory Green fabric. Heck, the team’s lovably monstrous mascot (who got lassoed by one of the trick ropers), Victor E. Green, has never had a more appropriate name.

The big lime peel could make some noise, too. Hearing 75,000+ voices scream “Dallas Stars” in sync with Pantera vocals after the green-clad team scored was a truly awesome experience.

They got to chant it four times. The Stars gave up two goals in the game’s first eight minutes, both while trying to kill Corey Perry’s 5-minute elbowing major penalty (and the 2-minute delay of game Blake Comeau took in the middle of it). But as they did in overcoming a disastrous start to the season and in moving past an unexpected dismissal of their head coach, the Dallas Stars battled back. Comeau scored in the second period and three of his teammates tallied in the third. The defense stiffened and the large crowd enjoyed a 4-2 win.

The attendees were into this hockey game, too. Most of their seats didn’t provide great views of the ice, and, as noted above, the show included a lot of non-hockey attractions.  But though the Cotton Bowl Stadium does have nice-looking video boards, it offers little else in the way of amenities – or distractions. And the big-game atmosphere felt a lot like a playoff game. 85,000+ people watched hockey.

My reason for attending the game came through a documentary piece I’m doing about Ed Belfour, and also some projects for his Belfour Spirits distillery. The day started with an offsite whiskey tasting and reception before the game (Mike Modano was also there) and then progressed to Belfour making the rounds for various interviews and appearances on the fairgrounds. As the Hall of Fame goalie moved around, often accompanied by former teammates like Craig Ludwig and Brad Lukowich, one could see how much they, and especially their sport, meant to the Dallas-area fans. As Belfour sat down to talk to Sportsradio 1310 The Ticket, a sizable crowd chanted “Eddie, Eddie.” As we walked to the NBC Sports broadcast emplacement for an interview with Mike Tirico, more fans that I could count said, “Hey, Luds” to Ludwig. 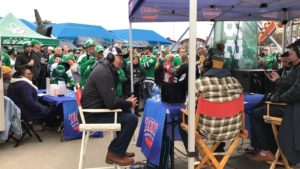 As Stars broadcaster Josh Bogorad interviewed Belfour, Lukowich, and Ludwig on stage pregame, he referenced the Dallas Stanley Cup win to which those three contributed in 1999. They discussed the impact it, and the Stars’ presence in general, had on their sport in this area. That the world’s top hockey league would use one of its jewel events to showcase this area’s unique character (and maybe next time they can work in something about the Kimbell Art Museum and Texas Instruments’ integrated circuit, too) shows they think that impact was a substantial one.

It turns out that the ethos of North Texas is embodied by more than just rodeos and football. The sport of ice hockey also has its place.  More than 85,000 people, most wearing green, would no doubt agree.