On Sat., Jan 1., Gary Losada’s two-year term on the board of the Tarrant Appraisal District (TAD) will end. Losada joined the board as a reformer who called out wasteful spending and unethical dealings at the governmental group that appraises property values and awards exemptions.

The makeup of TAD’s new board won’t change significantly, although its approach to governance likely will. Replacing Losada, the only incumbent who was not reelected, is former city councilmember Jungus Jordan, who was booted by District 6 voters earlier this year.

TAD’s board is composed of five members who are elected by leaders of taxing entities (i.e., cities, school districts, and other groups that rely on property tax revenues).

At the most recent TAD board meeting, Losada brought up two points that he hopes the new board will address in 2022.

“I asked chief appraiser Jeff Law if we have a policy against appraisers having a second job as a Realtor,” Losada told us. “He said yes.”

Losada then informed Law that he knew of at least one TAD employee violating that policy. Allowing TAD appraisers to have side gigs as Realtors creates an inherent conflict of interest.

“Appraisers have inside knowledge,” Losada said. “That gives that person an upper hand compared to other members of the public.”

“That’s nuts,” Losada said. “Those exceptions should only come with board approval.”

The past two months have been a reminder that TAD’s board elections favor establishment candidates who represent the interests of a handful of powerful taxing entities, Losada said. Several city council boards had made up their minds on whom they were going to vote for before Losada had the chance to speak to those boards during open meetings.

“I went to so many meetings where the die was cast before I walked in that meeting,” he said. “There should be a public debate over the candidates before a motion is made to nominate candidates. There were deals done beforehand.”

Small cities like Pantego and Lakeside weren’t allocated any votes this year. How votes are allocated remains something of a mystery, the outgoing board member said.

When asked about his proudest achievements while serving on TAD’s board, Losada pointed to a new policy that mandates that any billing agreement contract in excess of $50,000 be approved by the board. The policy may one day end secretive contracts like the one enjoyed by TAD’s attorney Catherine Alder, whose monthly salary of $32,370 was never approved by TAD’s board, Losada said.

Alder’s contract was renewed in August during the one meeting that Losada missed in 2021. He said the timing of that vote was no coincidence.

Over the past two years, TAD’s monthly board meetings have become more transparent due to Losada’s efforts. They are livestreamed, and public comments can now be phoned in.

Losada worries that nepotism, the board’s lack of an independent attorney, and a general permissive culture that allows unethical decisions to be made at all levels of the appraisal district will be allowed to continue under the new board.

“I think the board is not going to do anything, or, if anything, they will try to undo the work I’ve done,” he said.

At the time, O’Hare’s supporters falsely stated that Carlton and Moore were pushing components of Critical Race Theory (CRT) on Southlake’s wealthy and largely white students. Carlton and Moore texted each other in mid-2020 as they tried to address rampant and documented racism in the Carroll school district, which serves Southlake. Those texts, which were exchanged outside of a public meeting, led to the board members’ ongoing criminal charges.

Several Southlake parents told us that the indictments were intended to force Carlton and Moore to step down from office for the two to be replaced by board members who bought into bogus misrepresentations of CRT.

The Tarrant County District Attorney’s office tried to block our request by seeking a legal brief (a formal request to exclude information from the public) from the State Attorney General’s office. The AG compelled the DA’s office to release several documents that shed light on the events that led to the unprecedented and ongoing prosecution of alleged TOMA violations.

A document labeled “Notice of Open Investigation” shows that Assistant District Attorney Lloyd Whelchel approved a criminal investigation into “Open Meetings Act Violations” on Sep. 23, 2020. He notified the grand jury, the document reads. Whelchel’s action came just weeks after a civil lawsuit was filed by Kristen Garcia, a Southlake mother with close connections to a powerful PAC, Southlake Families, that O’Hare claims he founded. In the civil lawsuit, which the school district recently settled for roughly $134,000, Garcia similarly accused Carlton and Moore of violating TOMA. The concurrence of the criminal investigation and civil suit could be seen as evidence that the DA was working for and possibly coordinating efforts with Southlake Families supporters for the common goal of discrediting the school board ahead of April’s 2021 school board election. 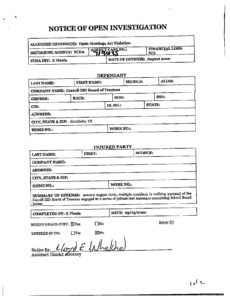 Another released document gives a possible start date for the grand jury hearing that led to the indictments. Under common practice, county prosecutors make their cause before 12 or more jurors that criminal charges should be brought on one or more individuals. The date of the grand jury is listed as “January Term 2021,” but the document doesn’t list the exact date when Carlton and Moore’s case was heard, which could have been weeks or months later.

The presiding judge was Mollee Westfall, the Republican for Texas’ 371st District Court who recently stepped down to run for Tarrant County DA. Current DA Sharen Wilson recently announced that she will not seek reelection in 2022, and it is widely believed that part of that decision was due to blowback from the Carroll indictments that received scrutiny from our news magazine and NBC News.

Following the grand jury decision, Carlton and Moore were arrested on April 1 and just weeks before the end of a contentious school board election that brought two Southlake Families-backed candidates to Carroll school district’s seven-member board. Carroll is currently under federal investigation for civil rights violations stemming from complaints filed by Southlake students.

Fort Worthians now have a new way to submit complaints about high grass, potholes, and other irksome features of urban life. Apple or Google app stores now offer downloads of MyFW app. Users can provide descriptions of city problems, and the request will go directly to city staff for a “quick response,” the city says in a statement. “The user can view the status of the request in the app and receive a notification when the work is complete.”

Camp Bowie, the WWI training facility for members of the 36th Infantry Division, closed in 1919, and the last remaining structure, the Camp Bowie Hospital Ward, was recently preserved with the help of the city’s Historic Site Tax Exemption (HSTE).

“The HSTE encourages substantial rehabilitation of designated properties, such as the World War I Camp Bowie Hospital Ward,” the city says in a statement. “The HSTE freezes the taxable value of a property at prerenovation levels for 10 years. The local HSTE can be paired with state and federal preservation tax incentives to provide a substantial financial incentive to save and adaptively reuse historic buildings.”

The current owner of the home followed HSTE guidelines when repairing windows and adding modern features like electrical systems.

A recent profile in the Fort Worth Report failed to call out Carlos Turcios for his staunch support of vapid conspiracy theories about Critical Race Theory (CRT). Turcios, a Fort Worth ISD graduate and current UTA student, has falsely alleged that CRT is taught to students in our local school district. He points to a voluntary course on CRT that is available to schoolteachers as proof that the Fort Worth school district is indoctrinating students in a so-called Marxist ideology that blames white children for America’s history of racism.

The effort to roll back progress on racial equality under the guise of removing CRT from public school classrooms should be seen and described for what it is, racist bullshit, and publications that fail to disclose the true intentions behind right-wing figures like Turcios betray the public trust.