Home Calendar Big Ticket Lewis and Snark
SHARE
Facebook
Twitter
To be active in American politics is to be angry. Liberals and conservatives are angry at each other all the time, for reasons we won’t go into here. But what about the angry center? Who speaks for the moderates, who hate the extremists on both sides for poisoning the atmosphere and turning political discourse into an endless round of name-calling and spin? 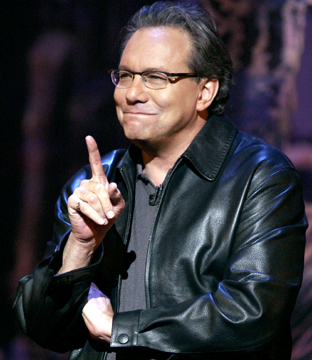 The answer would be Lewis Black, the whiny-voiced standup comic and veteran of The Daily Show with seemingly bottomless reserves of spleen. Most “angry” comics have yelled themselves out by the end of the show, but Black runs as strong at the end of his sets as he does at the beginning. He vents his rage at everything from the Pledge of Allegiance (“No child has ever said the words ‘under God’ and experienced the rapture”) to candy corn (“I think it’s tar-based; you can actually melt it down and run a car”) to recent U.S. presidents (“If this is the way leadership is going in this country, in a few years we’ll all be voting for plants.”). This Saturday night, the comic who combines the late Sam Kinison’s attitude and the late Bill Hicks’ steel-trap mind brings his act to Bass Hall in downtown Fort Worth. For everyone who hates the direction America’s headed in, it’s a chance to laugh away your anger.