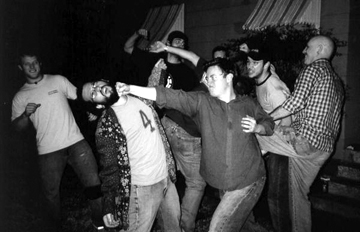 Confusatron does a lot of everything and amazingly well. In most tunes, the eight-piece ferociously bites downbeats, focuses hard on the resultant groove, and then drifts off into reverie. Beneath the swirl of sax and guitars lie bassist Matt Skates and drummer Lucas White’s rhythms, intelligently crafted and just varied enough to be different.

Once a street-corner novelty, Confusatron has become North Texas’ tightest, most original genre-busting set of architects.

When an improv-happy octet chooses to integrate myriad musical styles and personalities into a cohesive vibe, each live performance tends to be a one-of-a-kind affair. Laying down a studio album track by track would have undermined the band’s dedication to capturing moments as they unfold. The only way to proceed, then, was with a live recording.

About a year ago at Axis, Fort Worth soundman extraordinaire Andre Edmondson caught Confusatron in action — quick time signature changes, solo trade-offs, and all. Although the large room leaves traces of faint echo, every keyboard tinkle and conga beat comes through loud and clear.

Most Confusatron tunes aim to get bodies moving. The bass is almost always the main provider of funk, and the ethereal accents that are typically left to Darryl Wood’s computer give the primal jamming a slightly trance edge.

Almost all of the guys play in different outfits around town. So when Confusatron begins to write a song, each member brings his own idiosyncrasies to the table, resulting in something like group individualism.

The instruments do the majority of the talking, but occasionally keyboardist Justin Pate and saxophonist Bryan Batson lend their voices to the mix. On the band’s cover of “Pusher Man,” the sax man’s youthful but soulful charisma gives the classic R&B number a contemporary edge.

Both enjoyable and joyous, Confusatron’s first official recording doesn’t compare to the band’s live shows, but then again, what does?