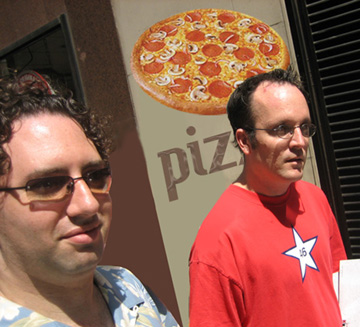 Almost 12 years ago, after receiving numerous wrong-number calls at home, McKee discovered that his land line was a couple of digits off from that of a nearby fast-food pizza chain. For shits and giggles, he and his friends (via three-way calling) decided to pretend to be employees, really inept employees, and mess with callers’ heads. McKee recorded the conversations and last month uploaded several hundred hours’ worth of Jerky Boys-type slapstick to a web site, www.pizzacalls.com. He’s just made high-quality MP3 versions available for sale: $5.90 per single set, $12.69 for a four-hour package.

“It’s just something my friends and I did for fun,” said McKee. “But after I started playing some [calls] for friends, they convinced me that I had a real commodity on my hands. I have people in far-off places that really want to hear this. … The internet is so viral. You put something out there, and all of a sudden people are talking about it in weird parts of Canada. That’s how it works.”

By day, McKee designs web sites for different companies. He got married two years ago, and his wife recently had their first child, Zachary. He doesn’t sit around waiting for dinner-time calls but makes the most of them when they happen. McKee said he receives about five wrong-number calls per week, mostly at night, including ones for a bail bondsman and an old woman named Shirley. However, during his halcyon days, about three years ago, he recalls getting about three calls per day. He’s not sure why the frequency has dropped. “Maybe people are eating healthier,” he said. “Or phone buttons have become larger over the years.”

None of the seven friends who have participated in the yuks has professional comedy experience, but they’re all slightly nuts. About 10 years ago, McKee and more than a dozen friends used toothpicks to connect a record-breaking number of key limes (3,080). While mildly sedated on prescription pills, McKee won two nationally televised game shows (Friend or Foe and Lingo). The 32-year-old is also the proprietor of five different online puzzle sites. The three most popular are www.farklepimp.com, www.wordsandwich.com, and www.pipsquack.com.

McKee uses a distortion device to help simulate the voices of the myriad characters on his Pizza staff: a bass-tone black man who mutters “fubada” every other word, an effeminate male with a strong lisp, and a young Hispanic who whispers rapid-fire phrases, among others. Over pre-recorded hold music, McKee’s operatives also promote new menu items, such as one created by “marketing girls”: “Try our new appetizer, the Clicks Deluxe! A round, doughy treat filled with feta and mozzarella! … When you bite into it, it goes ‘click!’”

On another call, labeled “Nika,” McKee patches in his lead contributor, Steve Hunt, a political activist in Oklahoma City, to handle the order. The Okie relentlessly harasses the namesake caller.

“I want pepperoni and hamburger,” she says.

“You want it sprinkled all over or on different sides, like half ’n’ half?”

McKee only recently felt that he had enough good material to sell. “I figured once it came out in the open, the gig would be up,” he said. “Look at Sacha Baron Cohen,” also known as the comedian Ali G. “He’s giving interviews now as the Borat character. In small-town Alabama he may still go unrecognized, but he won’t be able to pull off the shtick much longer.”

While Hunt says there is “no profound philosophy in Pizza Calls,” he and his fellow “co-workers” do manage to throw into relief the absurdities in consumer culture, on both sides of the counter. Ignorance, impatience, and outright rudeness definitely don’t grease the wheels of business. Actually, they can, as Pizza Calls proves, stop it cold.

No corporate suits have complained to McKee, and he believes that’s because the pizza chain hasn’t lost any business. “The callers at one point or another realize they’ve been had,” he said. “Usually, the hungrier ones look up the right number.”