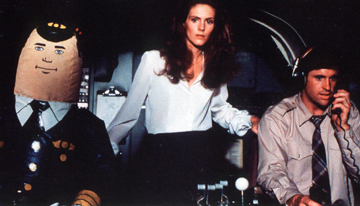 Now it plays at about the same rate as most lowbrow spoofs that Hollywood puts out these days, though it’s still far superior to most of the junky movies that it spawned. (In fact, Jim Abrahams and David Zucker, two of the movie’s co-writers and -directors, were last seen in charge of the Scary Movie franchise.)

Though it takes its plot about a plane whose crew is struck down by food poisoning from a 1957 thriller called Zero Hour, the movie is best understood as a parody of star-studded late-1970s disaster epics, as well as the launching pad for Leslie Nielsen’s second career as a deadpan comic actor. You don’t have to know any of that, however, to appreciate the absurd gags and situations stuffed into every corner of the film. There’s the shot of the nun reading Boy’s Life magazine, followed by a shot of a boy reading Nun’s Life. That same boy later recognizes Kareem Abdul-Jabbar playing the co-pilot and gets the NBA star to break character. The movie screens Sunday at Fort Worth Central Public Library, giving you a chance to relive Peter Graves revealing his interest in gladiator movies, Barbara Billingsley talking jive, Robert Hays outdoing John Travolta on the disco floor, and all the rest. Oh, and there’s a reference to Gerald Ford that plays rather unfortunately now. Try to ignore that.