Home Arts Art Big Shoes to Backfill
SHARE
Facebook
Twitter
Architect Ames Fender’s grandfather is Wyatt C. Hedrick, the man who’s most responsible for the way that much of Fort Worth looks — he designed the T&P Building, the Will Rogers Center, TCU Stadium, the main post office downtown, and the oversized warehouse in the next block Also on his list is the Fort Worth Club building, the old City Hall, and the downtown fire house. 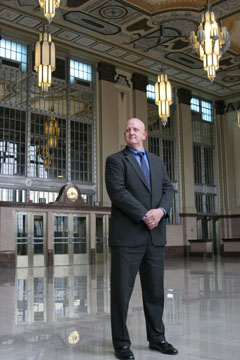 Late-fortysomething Fender, needless to say, has a lot to live up to. For the most part, the Fort Worth native and graduate of Georgia Tech University hasn’t had a chance to leave any sort of lasting imprint on the area. But things are looking up. Fender has some major projects in the works, including a six-story condominium, Villa de Leon, on Trinity Bluff downtown, and a 68-unit condo project in Dallas that covers two square blocks. He’s also working on a feasibility study to see if an expansion of the Scott Theater complex in the Fort Worth Community Arts Center on Lancaster Avenue would be sufficient house rehearsal studios and administrative offices for Texas Ballet Theater, which needs bigger facilities. The company is currently crammed into a storefront building on the fringe of Ridgmar Mall.

It isn’t unusual for offspring to follow in their parents’ footsteps, especially if the parent created a major business or successful career. In some cases it’s hard to avoid. Less common is a grandchild taking up the threads of a grandparent’s interest, especially when there was no personal relationship developing between the two. “I never got to know my grandfather,” Fender said. “He passed away when I was five years old. I do remember him with awe. He was very tall and always kindly. I thought it was cool growing up going to football games at TCU or the rodeo at Will Rogers or movies downtown, knowing my granddad had created these wonderful spaces for people to get together and be entertained. It intrigued me that someone could do this for a living, but I didn’t think about doing it myself.”

His father, Howard M. Fender, is a lawyer and retired judge, and his mother, Mildred Fender, is a well-known local arts patron. Neither has any connection to building design. Something seeped through, however, and when it was time for college, Fender took off on an architectural career. At Georgia Tech, he studied engineering and also met his wife, Sarah Walls, who was studying law at nearby Emory University. (She is now a partner in the Cantey Hanger Law Firm.) Fender has already worked on two of his grandfather’s other downtown buildings: the Electric and the Sanger. When the electric company sold its building to developers, Fender designed the renovations to turn it into condos. Surprisingly, the old Hollywood Theater, which was part of the structure, is still essentially intact. Fender said the lower part was converted into indoor parking, “but the balcony and much of the stage area haven’t been touched. It could be made into a small theater, except there’s no practical way of getting people in and out.”

The Sanger Building, billed as “the largest fully air-conditioned department store west of the Mississippi” when it opened in 1929, has gone condo, too. Fender was brought in to redesign the ground floor for exhibit space when the Museum of Modern Art decided to have a gift shop there while its new building was going up across from the Kimbell Museum. He also handled the transformation of the building formerly occupied by the Modern into what is now the Fort Worth Community Arts Center. The architect also designed the fitness center at River Crest Country Club, the new technology wing at Trimble Tech High School, and the restaurant formerly known as Angeluna, now known as Ferré, across from Bass Performance Hall. A number of residential projects are on the boards, and he just completed a dramatic expansion of a house on Alta Drive originally designed by noted architect Hubert Hammond Crane.”Every day I see my grandfather’s achievements all around me,” Fender said. “I can only hope I have a fraction of the impact he had on Fort Worth, in the new millennium.”