Abstract art is to many minds American art, yet the Modern’s new exhibit, Declaring Space, looks to confound that view. 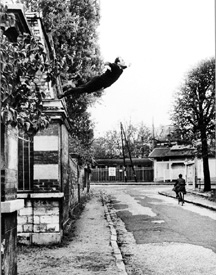 The show includes four painters, but only two are from the United States: Barnett Newman, whose best-known canvases are defined by single jagged vertical lines that he called “zips,” and Mark Rothko, whose warm, blurry fields of color were intended to induce tears of joy in his viewers. (One of Night & Day’s art professors reported witnessing his then-girlfriend break down crying while gazing at a Rothko, so there you go!) The other two artists in the exhibit were Newman’s and Rothko’s foreign contemporaries. The Argentine Lucio Fontana founded a movement called Spatialism, whose adherents sought to emphasize movement and time as elements in painting, mainly by slashing holes in their canvases.

The Frenchman Yves Klein (who died of a heart attack at age 34) took abstraction into the realm of performance art, occasionally incorporating music into the creation of his pieces and frequently using naked models dipped in blue body paint as “living brushes” for his canvases. The Modern will even have some galleries lit in the color that Klein invented and patented, International Yves Klein Blue. With the Cultural District holding its Day in the District event this weekend, there may be no better time to drop by the Modern.