Seattle transplant Herb Levy settled in Fort Worth eight years ago so that his wife, painter Carol Ivey, could be closer to her family.

He had visited Texas before, in 1986, to attend the now-defunct, roving New Music America festival, devoted to experimental music that challenged traditional norms. Adjusting to the local ways wasn’t a huge step. “I like barbecue and Mexican food,” he said, not jokingly, “so it was easy.” The musical scene proved to be a bit tougher, though. Back in the Pacific Northwest, he ran a nonprofit organization that programmed 10 concerts of avant-garde music per year. Now 55, he’s looking to bring that same repertoire to Fort Worth.

Levy has already introduced Fort Worth to the likes of solo vocalist and contemporary composer Jaap Blonk and performance artist Rinde Eckert. Last month, he brought to town Ellen Fullman, who plays a 300-foot-long string instrument. This weekend, Levy will inaugurate a series of contemporary music concerts at Van Cliburn Recital Hall. Called Other Arts, the series begins with a concert by pianist Louis Goldstein performing pieces by 20th-century innovator Morton Feldman. The next day, Goldstein plays works by Feldman contemporary John Cage. Two more concerts will take place in spring, one with electronic composer Carl Stone, and the other with the Wayne Horvitz Gravitas String Quartet, which fuses structured compositions and improvised jazz.

To get the lay of the land here, Levy consulted with the likes of the Mimir Chamber Music Festival and Amphibian Productions. Though he found Seattle to have a “more natural audience” for nontraditional concert-hall music, he cited the Cliburn at the Modern series and Dallas’ Voices of Change as proof that North Texas has receptive listeners as well. “You don’t have to worry about [present-day composers] Ned Rorem and Osvaldo Golijov getting a hearing here,” he said.
A thin, bald man with black-framed glasses and a professor’s aura of knowledgeability and a quiet sense of purpose, Levy grew up in the Boston area, where he found no shortage of performing arts events devoted to living composers and playwrights. “I naively assumed that that’s what I would be studying in college,” he said, though he quickly discovered that the standard college fine arts curriculum was more about long-dead masters. Undaunted, he designed an independent major at the University of Wisconsin to allow him to immerse himself in contemporary art and music, with some history for context. He finished his degree at the University of Washington, by which time he had discovered that his talents pointed him toward New Music.

Sunday’s concert features Cage’s Sonatas and Interludes for Prepared Piano, which instructs the performer precisely where to insert erasers, paper clips, and other objects into the instrument’s strings in order to dampen the sound. “Cage used randomness to break the habits of performers, listeners, and himself,” Levy explained. “A classically trained pianist who’s playing a prepared piano won’t hear the notes he expects to hear. It makes the musician think about what he’s doing and the audience think about what they’re hearing.”

Levy describes the Sonatas and Interludes as “charming little pieces,” and indeed Cage’s 60-year-old work is highly approachable today. Less so is Feldman’s Triadic Memories (1981), a soft but intense 100-minute opus totally lacking in pianistic pyrotechnics. Levy compares it to Andrei Tarkovsky’s extremely lengthy and philosophically charged films popping up in a world of Hollywood blockbusters. “The dramatic developments happen through small changes,” he said. “The same melodic phrase is repeated with different rhythms or notes, and it’s like the facets of a crystal.” Levy hopes that this music will work for audiences much better in live performances than it does in recordings. “The performers’ sense of involvement comes across to the audience,” he said. “It makes the music less abstract, more palpable.”

Nevertheless, he anticipates a few walkouts during the first 15 minutes of Triadic Memories, and he says that’s OK. “I’m trying to make people aware of the range of music that’s out there. I’m not expecting people to find their favorite song, but I think we can give people something new to talk about, something they haven’t heard before. We’re looking for adventurous listeners.” — Kristian Lin 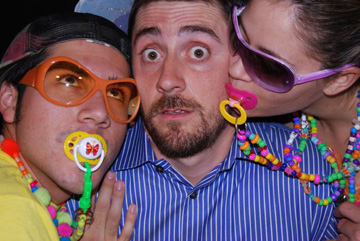 Butterfly co-founders and PLUR’s creators Adam J. Dietrich and Joshua B. Reeves met and became best friends — and, of course, artistic cohorts — through the local rave scene. While not downplaying the damage and death that sometimes flowed from the chemical excess, both men have come to believe that the idea of strangers gathering in an anonymous but joyous frenzy can be carried over into a life philosophy: being nonjudgmental, sharing interconnectedness, and expressing yourself, a veritable holy trinity here. However hoary the sentiments — and even considering the general scatteredness of its execution — PLUR comes close to making the naïve profound again.

With an original score by Dietrich and Reeves and standout choreography by cast member Andrew Tomlinson, the show follows the simple story thread of Brandon (Dietrich), a 25-year-old online mortgage broker. One day he receives an instant message from the love of his hard-partying days, Becca (Oni Kedara), who has returned to question Brandon’s life as a zombified suit and to try to rescue him from his lot. Past and present intermingle — sometimes as live action, sometimes as digital video projected on a back-of-the-stage screen — but PLUR seems to exist primarily to explain the sense of youthful limitlessness that accompanied those feverish warehouse nights.

Tellingly, the program contains no director credit, which might explain the production’s chronic stop-start pace. But just when it seems about to stall, Dietrich and Reeves — who works up a sweat at stage right as the ever-present DJ Heavy Duty — and their plucky cast kick up an innocent orgy of swirling lights, dry-ice mist, and a theatrical determination that’s infectious. Dietrich wields a wistful charm as the hapless protagonist who feels he’s become an old man by his mid-20’s. As the rave temptress Becca, who may be luring him toward bliss or destruction, Kedara has a strong, clear, but very un-showy voice. In the big numbers, she takes the road less traveled by not sinking to annoying, histrionic American Idol-isms. At its best moments, PLUR — whose title is a kind of deliberately vague shibboleth, a raver’s version of “all you need is love” — offers a bracing challenge to the cynics who would harp on the semi-professional presentation. — Jimmy Fowler