The Tarrant County College District crossed a key threshold this week in the lengthy process of getting permission from the federal government to build its controversial $350 million-and-rising downtown campus – a step that emphasizes how far the college still has to go before construction can start on the north half of the project. 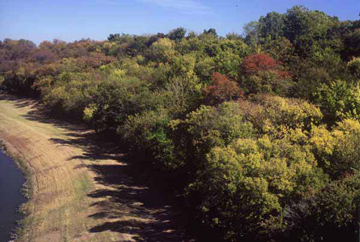 In a draft report to be released on Wednesday, U.S. Army of Corps of Engineers officials wrote that they have found “no significant impact” to the “quality of the human environment” from TCC’s plans for the part of its campus on the north bank of the Trinity, including a bridge over the river and at least five buildings to be built on or over the river levee. The Corps’ assessment is required because the project, planned for both sides of the river just east of the Main Street bridge, calls for major amounts of construction over the Trinity and involving the river levees. A pedestrian bridge is supposed to connect the two halves of the campus, and plans call for building piers in some places to be sunk deep into the levee structure. Already, TCC has taken a massive chunk out of the historic bluff just east of the Tarrant County Courthouse, where construction has already begun on the south part of the campus.

The draft report covers only TCC’s plans for the north bank of the Trinity and the bridge because the Corps determined that that’s the only portion affecting the floodway, and therefore the only portion over which it has jurisdiction. The report doesn’t mean the district is anywhere close to getting an OK to start dropping piers into the levee, said Corps environmental specialist Heath McLane. In fact, the Corps is actively seeking public comment on the project. “This is by no means a go-ahead for construction [on the north side of the river],” he said. And even if it were, he said, the college has yet to apply for a permit to build in the floodplain as required by federal law – a step the district should have taken as early as 2004, many critics say, when TCC first announced the project. (“Master’s Degree of a Mess,” Jan. 30, 2008.) “This is a draft document to garner public comment,” McLane said. A final version of the report “could be modified to reflect the public’s concerns if they are found to be valid,” he said. The 30-day public comment period runs through March 17.

“We strongly urge the public to comment,” said Corps spokesperson Clay Church. If there is sufficient public concern, he said, a public meeting will be scheduled to allow even more citizen participation. The report is available online at the Corps’ Fort Worth web site, www.swf.usace.army.mil, and in hard copy at the city’s downtown public library. McLane said the Corps did not conduct its own independent environmental assessment, but instead verified the data that was presented by the district’s environmental contractor, the LopezGarcia Group. The Corps environmental specialists and engineers held numerous meetings with Garcia and others “to make sure the document met our standards,” McLane said. The college design calls for a concrete barrier to be built and numerous piers to be drilled in the levee to support the permanent bridge, a temporary “work bridge,” and five classroom buildings. The draft report makes clear that the Corps’ findings are based on assurances from the district that it will adhere to the engineering standards approved by the Corps. If the Corps “deems any construction activity to present an unacceptable risk to the integrity of the levee, construction would cease immediately,” the report says. 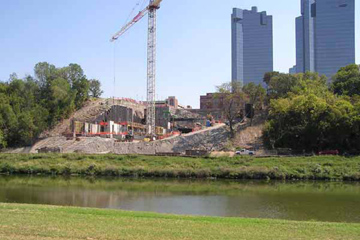 It wasn’t clear whether the draft report takes into account all of the design modifications that the district has made, including some major ones. “We haven’t received the final engineering drawings” from the district, McLane said. One person who has already submitted comments, at an earlier meeting of the Corps on the cultural and environmental impact of the construction, is Larry Meeker, who was chairman of the 1965 steering committee that sold Tarrant County voters on the idea that a junior college district should be created. One of the requirements of the environmental assessment is to assure that the construction will not dump contaminants into the river. Meeker, a local oilman, questioned LopezGarcia’s assurances that the project’s planned excavation – 60 feet deep and 400 feet long – in the levee would involve no sand, gravel, or contaminants in the holes drilled to bedrock. “Encountering no sand or gravel” in a levee “is unreasonable,” Meeker wrote.

An engineer who reviewed the data for Meeker found sand and gravel under the existing levee in the area. Contaminants involved in the excavation could affect a long stretch of river, he said.  Church said that the Corps takes Meeker’s concerns seriously and is reviewing them with “due diligence.” That is why they were included in the draft, he said – to give others a chance to comment on them. Meeker has said he plans to raise those issues as well as others – including what he calls the excessive cost of the project – in a campaign to stop the downtown campus from being built. The oilman believes a downtown campus could be built for less than $150 million, putting $200 million back into educational needs, but the validity of the project itself is not the Corps’ concern. Its job is to see that the project meets the requirements of the law and doesn’t affect the Trinity floodplain, Church said.

Once the comment period and public meetings are done, he said, “this closes out the environmental assessment that’s required under the National Environmental Policy Act.” However, the district still has major legal hurdles to jump. College officials still have not formally applied to the Corps for a permit to construct the north-bank part of the campus. TCCD Vice Chancellor David Wells said three weeks ago that the college would probably submit the application within 45 days or “soon after the Corps’ environmental assessment is published.” He could not be reached for comment for this story. Then there are historical preservation concerns still to be addressed – on both banks. State and local historic preservation groups have expressed concern and outrage over things the college has already done on the downtown, south-bank half of the campus, including the two-building-wide cut that TCC contractors made in the bluff, the lack of consultation with preservation groups, and the demolition of several buildings before TCC’s own historic preservation consultant could evaluate them. But the Corps has deemed that it has no jurisdiction on the south bank. The Texas Historical Commission has jurisdiction on the south side – but no enforcement powers.

On the north bank, there are historic preservation concerns as well, more having to do with the effects on views of the bluff, the Paddock Street Viaduct (the Main Street bridge), and the courthouse. The Corps is working with local and state historic groups on an agreement that TCC must sign, laying out what it will do to mitigate damage already done to historic preservation interests.