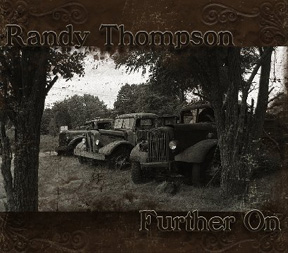 Further On is an often dreary, often satisfying mix of traditional and modern country with deep folk influences, despite the grunge-tinged electric guitar that thunders through most of the songs. Here on his third release since his 2004 debut, small-town Virginian Randy Thompson delivers confident, authoritative takes on his own songs and some adaptations.
All 10 tracks are solid. In exploring relationships and yearning, Thompson occasionally digs up a diamond of a phrase. His plaintiveness is endearing. He wonders why she doesn’t see what her kind of love has done to him, he lets himself be pulled under by the very thing he should be avoiding, he comes home drunk after a night on the town but claims, “It’s still me in here,” hearing “a voice of angel sweetness” telling him it’s better further on.

Further On is, in a way, a family effort. Thompson’s father wrote the title song as a poem in the 1920s, and his 16-year-old son Colin adds accomplished guitar on two of the tracks. The music – mostly guitars, bass, percussion, fiddle, and steel guitar – is tasty and full but never overdone. While most of the songs seem to have been written for men on barstools in lonely, late-night places, Thompson’s interpretation of “Going Down to Lynchburg Town,” with supporting vocals from Cindy Alden, livens up the proceedings. Maybe he will find true love – or at least some late-night adventure. Thompson, who claims to own every 78-rpm record ever recorded by Hank Williams, decided when he was eight years old that he was going to be the next Hank. Maybe Further On.-Tom Geddie