Mark Jude Poirier’s name will be more easily recognized by readers than cinephiles. 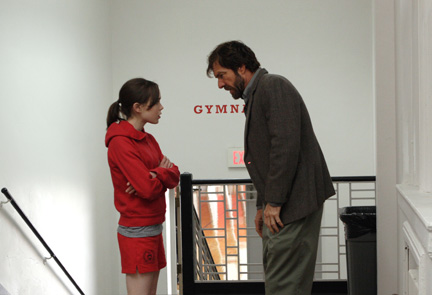 He’s an acclaimed fiction writer whose novels (Goats) and short-story collections (Unsung Heroes of American Industry) are all about losers and slackers, mining punchy prose and compassionate humor from tales of dashed hopes, failed marriages, family tragedies, and bad sex. Smart People was supposed to be a novel, too, but when the author won a screenwriting fellowship and couldn’t come up with any original story ideas, he turned his planned book into a movie DELETE. The result is this low-key, rewarding comedy that demonstrates that his distinctive sense of humor comes across even more vividly on the screen than it does on the page.

Dennis Quaid stars as Lawrence Wetherhold, a professor of English literature at Carnegie Mellon University with a well-deserved reputation as a cynical, egomaniacal windbag among his students and colleagues. One night he takes a tumble while trying to scale the fence at the impound lot where his car is being held, and he lands in a hospital under the care of Janet Hartigan (Sarah Jessica Parker), an ER chief and former student of his who still remembers the “C” that he gave her freshman paper on Bleak House. She informs him that because he’s suffered a concussion, he can’t legally drive his car for six months. The widowed professor and the lonely doctor eventually start dating, which doesn’t sit well with Vanessa (Ellen Page), Lawrence’s asexual, overachieving Young Republican daughter who hasn’t yet told her dad that she’ll be attending Stanford instead of CMU, because he’s so self-absorbed that she assumes he’s not interested.

Nonplussed as Vanessa is about “the physician,” she’s even less enthusiastic about the idea of chauffeuring her dad around, so she hires Lawrence’s chronically underemployed adoptive brother Chuck (Thomas Haden Church) to do that job in exchange for room and board at their house. Quaid is so often typecast as manly men of action, we forget that he can be extraordinary when he’s outside what people think of as his range, most notably as the tormented gay husband in Far From Heaven. Here he’s quite convincing as a trainwreck of an academic, sinking his voice to a refined whisper, sporting a full beard, and spending every scene looking like he just rolled out of bed. Lawrence is the type of guy who drones on for 45 minutes about literary theory during a date and aggressively pursues the job of English department chairman (nominating himself for the position after he’s forced to serve as head of the search committee), even though he merely wants the prestige and not the responsibilities.

This is a tough character to make sympathetic, and though Quaid could perhaps have used a bit harder of a misanthropic edge, the role brings out an unsuspected delicacy in him. He makes bitchy little faces at the students he regards as pitifully stupid, which are not only funny but also contrast tellingly with the way he shows Lawrence stumbling through his own life – sequences like the one at the impound lot display this actor’s gift for physical comedy. This shambling turn is the most delightful performance that Quaid has ever turned in.

He’s not alone, either. The four principals fit together beautifully, as if they were the cast of a well-rehearsed Broadway play. Parker makes a capable straight man here, reacting subtly to the Wetherholds’ many eccentricities, and I find her more appealing as this unpretentious, deglamorized woman than as Carrie Bradshaw. Meanwhile, Page (whose post-Juno fame is probably a major reason why this movie has made it to our theaters) manages to play this buttoned-up character without tamping down her natural effervescence. Church’s coarse self-awareness makes a bracing tonic to his castmates’ understated neuroses. He keeps the movie from growing too cerebral for its own good and wins many of the film’s biggest laughs, especially when Chuck maintains his cheerful equilibrium during an acrimonious Christmas dinner. (“I’m sorry. These children haven’t been properly parented in a long time. They’re practically feral. That’s why I was brought in.”)
The jokes are top-drawer, too, and they often spring from the closely observed details of academic life: Lawrence is working on an ill-tempered book of criticism entitled The Price of Postmodernism: Epistemology, Hermeneutics, and the Literary Canon. (Vanessa wants to change the title to You Can’t Read!!!)

First-time director Noam Murro displays great instincts for comic timing, and the characters don’t go in the directions mapped out by conventional movies – Janet isn’t a saint for hooking up with such a pathetic guy but rather someone who has issues of her own and pulls away when Lawrence wants more out of their relationship. Smart People is about characters who lack direction, so it seems ungrateful to complain that the story drifts a bit near the end. That’s a small nit to pick, though, for a movie this funny and generous about its exasperating characters, which makes it well worth a look.