TBones Mississippi Style BBQ was born in the back of owner Terry Coleman’s catering truck. 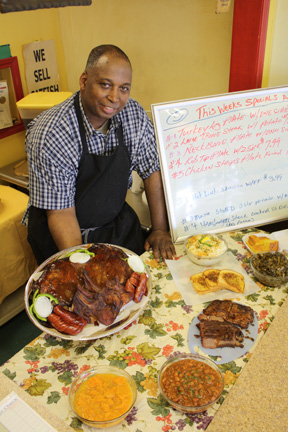 Coleman and his family still do catering, but for the past two years it’s been from the intimate confines (three four-top tables) of his barbecue/soul food restaurant, tucked away in a strip mall in South Arlington along with a Church’s Fried Chicken, Mrs. Baird’s Thrift Store, and “NY Stylz” barbershop. On a warm day, the aroma of wood smoke from TBones can tinge the air within a several-block radius – and will no doubt set you to salivatin’.

Not being from Mississippi, I was concerned that my Texas-bred preference for vinegary barbecue sauce might prejudice me. So I enlisted the help of my Mississippi-born friend Ben, who brought along some of his DFW Metro Stars semi-pro football teammates. None of them had ever heard of Coleman’s restaurant, even though one of them lives nearby. A possible problem may be TBones’ signage – or lack thereof. Unless you’re looking for the place, it is virtually invisible amid the primarily Asian-flavored strip malls.

The restaurant is bare bones simple. (Ordering, however, might prove to be difficult – if you ask Coleman what’s good, he’ll say, “Everything,” leaving you right back where you started: wanting to order everything on the menu.) Whether you order in or take your food to go, your bounty comes on Styrofoam plates with plastic cutlery. But what Coleman lacks in atmosphere, he more than makes up for in flavor.

The barbecue sauce, which covers everything but the catfish and the soul food, is sweeter than typical Texas-style fare and has a pleasant kick of spicy heat that lingers, which may be why every entrée comes with not one, not two, but three slabs of lightly buttered toast, to soak up the burn a little.

Three of the several entrées we tried – smoked turkey, dark-meat chicken quarters, and ribs – all had a terrific smoky flavor and were swimming in the sweet-spicy sauce. Like any good barbecue cook, Coleman won’t give away his sauce recipe. When asked if his sweetener was brown sugar, he smiled and allowed that, “Molasses might be closer.” He uses a combination of pecan, oak, hickory, and bois d’arc wood. Bois d’arc trees (also known as Osage orange) are native to Texas, Oklahoma, and Arkansas, and the wood is famously hard to cut. But, Coleman said, it produces a heavy smoke that adds flavor to smoked meats. Judging by the results, he ain’t lyin’.

Also heavenly decadent were the salty, spicy, lightly fried pork chops, with home-style mashed potatoes and a creamy brown gravy that was so good I actually thought for a second about licking the Styrofoam container. Ben described the collard greens – seasoned with smoked turkey, chicken, and ham – as “almost as good” as his mama’s, a high compliment for Coleman from a fellow Mississippian. And everyone at table praised the sides of macaroni and cheese and cabbage.
Coleman almost broke my heart when he said he might be out of sweet potato pie. Fortunately for us, though, he found us a wedge of the surprisingly fluffy, creamy, nutmeg-laden stuff. Even without whipped cream, TBones’ version of the Southern classic was sinfully delicious.

There were some misses, namely the catfish (large but average), the beef brisket (flavorful but somewhat chewy), and the ranch-style beans (OK but not nearly as good as the greens or potatoes). The portions were insanely generous – none of us, not even the big football guys, could finish our meals. Unless you’re with an entire football team, don’t let the three-meat plates tempt you, even though they’re a major bargain. Along with the T-bone steak, the three-meat is the priciest thing on the menu. The two-meat plates could easily satisfy two hearty eaters, and most of the sides are only $2. Perhaps the best bargains are the barbecue sandwiches, monstrosities that go for about a fiver. The family meals include your choice of any of the nine sides, plus ribs, brisket, turkey, baked or fried chicken, fried or smothered pork chops, hot links, and sausage for anywhere between $25 and $40, depending on the number of servings.

If you’re in a hurry, you’ll want to call ahead. Although there are baked items on the menu, you won’t find much heart-healthy content here. But soul food and barbecue are meant to be comforting, not challenging, and if you eat it only once in a while, your soul will forgive you for gorging on TBones’ delights.