In the last few years the number of suicides involving active-duty American troops has skyrocketed. In addition to engaging the enemy, a growing number of our soldiers are fighting themselves. And they’re losing.

The Army’s new solution is “resiliency” training. Instead of completely eliminating the back-door draft or reasonably limiting the number of deployments soldiers and their families have to undergo, Uncle Sam is simply trying to make sure our warriors can better stomach the strains and inequities we have required them to endure. 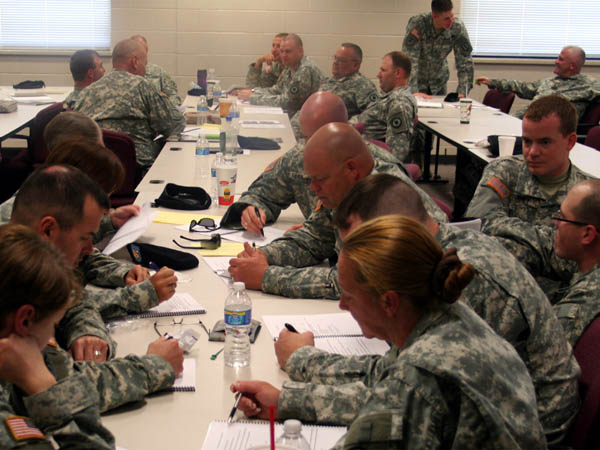 The logic seems to be that there is nothing wrong with what we’re asking them to do; they’re simply ill-equipped for the task. According to The New York Times, the “resiliency” program will be offered in weekly 90-minute sessions designed “to defuse or expose common habits of thinking and flawed beliefs that can lead to anger and frustration.”

Here’s another theory: Perhaps the “flawed beliefs” that lead our soldiers to thoughts of anger and frustration and perhaps to rage and self-contempt, don’t originate in the soldiers so much as in those who have led us into ill-considered, insidious conflicts. If your fellow platoon members die fighting or acting as occupiers or simply in delivering materials to a no-bid, over-budget Halliburton project, you’d like to believe they died for something noble or important or at least understandable. But in our current wars, that belief is hard for many soldiers to maintain. Our troops are caught up in spuriously concocted pre-emptive wars that are so laced with lies and propaganda that in the end they almost appear to be the very thing our men and women in uniform should be fighting against.

Our soldiers can’t sincerely claim they’re defending our country. And if they shipped out with the old “my-country-right-or-wrong” mentality, many have learned how spirit-crushing blind patriotism can be.

In Iraq we’ve fought, killed, and died for a handful of stupid lies eventually disavowed by those who told them. The same thing happened in Vietnam. The same thing will happen in Afghanistan.

And our soldiers’ and our nation’s troubles won’t end then we finally leave Iraq or Afghanistan. As Stephen King once put it, wars don’t end at treaty tables “but in cancer wards and office cafeterias and traffic jams.” Wars die a piece at time, a soldier at a time. And if our leaders make the grim decision to sacrifice our young men and women, to scramble their psyches and exhaust their humanity, all for oil and profit margins, then the sacrifice is made shabby and criminal, and our soldiers will have lived and died on distant battlefields as pawns in a villainous enterprise. The repercussions and grief will reverberate throughout our culture for generations.

Before we counsel our soldiers, then, on their resilience in the face of madness and lies, hadn’t we better assess the sanity of their dispatchers?

If you tell me America has been attacked, and you send me to a country that you know that had nothing to do with the attack, and have me unknowingly slaughter people who also had nothing to do with the attack, I will eventually find myself alienated from you, my community, and myself. It’s one thing to be made a fool of; it’s quite another to be reduced to a lethal, ultimately discarded marionette.

As for the Army’s attempts to bolster our troops’ psychological resiliency in the face of such absurdities, I sincerely wish them good luck. The plan obviously addresses the symptoms instead of the problem itself, but our military men and women need all the help they can get. My hope is that we don’t stop there.

Our leaders need to be held accountable, and we, the public, need to be chastised for our ignorance and frightful gullibility.

In fact, as the troops receive treatment and training for their psychological maladies, we could stand to be screened for our own potential neuroses, particularly of the collective variety. Those would include the massive apathy and brainwashing through which we allowed our government to torture, kidnap, and imprison people with impunity, to feed the Bill of Rights into the shredder, and to enrich soulless, criminal corporations who trashed our reputation around the world.

Clearly, our soldiers are not the only folks whose sanity we should be concerned about.

E.R. Bills is a local freelance writer whose work has appeared in many publications.