Went to a pleasantly small wedding several weeks ago at a bed and breakfast. So small that we five or six drinkers on hand had to bring our own hooch. As we’re all concerned about our waistlines (superficial?), we filled our mega-cooler with Bud Light, Michelob Ultra, and, for me, a couple — just a couple — of six-packs of Miller High Life pounders.

I collected beer cans as a kid and, as any true-blue beer-can collector will tell you, the High Life vessel, with its glorious golden sheen, is a classic beauty. In other words, I got the High Life pounders merely out of a weird sense of nostalgia and not necessarily because I liked the taste (though I quickly became a big fan). 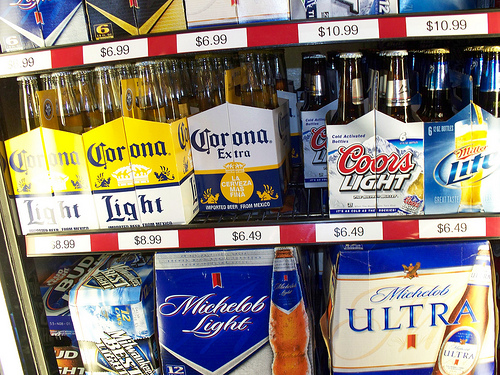 Anyway, one of the outside guests had come from London. Though American, he has been living in the U.K. for years. As presaged by his adopted accent and natural Anglophilia — and thick waistline — he was shocked and appalled at the “watered-down piss” in our cooler. He spent most of his time at the B&B sipping water, which was just fine with me. But the next time I found myself in front of a convenience store beer fridge, my mouth wonderfully agape at the seemingly endless options, I got to thinking: Is American light beer really that, well, “watered-down”? Is it really “piss”? Are Britons just that much more passionate and knowledgeable about beer than us? Or are they just more, I dunno, macho?

I got a sixer of Molsen Golden, my favorite non-American light beer. My favorite macho beer. (Nostalgia plays into my Golden affection, but that’s a story for another day.) I began drinking macho beer on a regular basis, deigning to touch my lips to American light beer only under special circumstances and on Tuesday nights after the paper’s been put to bed. Within a couple of days, my belly became distended. Like, Ralph Kramden-distended. Now, I’m no skinny-minnie, but I normally don’t have a Dunlap belly. (That’s when your belly done lapped over your belt.) The condition of my gut was alarming. The only thing about my diet that had changed was the caloric content of my beer from low- to high-cal. Was being macho worth looking like shit?

Some folks will unapologetically say yes. “Yes, drinking light beer is the alcohol equivalent of skipping rope while all your friends are playing full-tackle football without any pads and while wearing brass knuckles.” Bragging about drinking light beer is even worse. One conversation that you’d want to avoid, according to our British friends, would be:

British friend: “Ah, right-o! You got pissed, eh? Which fine drinking establishment, may I be so bold as to inquire, had the pleasure of your upstandin’ company?”

You: “Just the little bar down the street.”

British friend: “Ah, the local pub! Right-o. How many pints o’ Newcastle did ya down? Twelve? Fifteen?”

You: “Newcastle? No, I just had a couple Coors Lights.”

British friend (finally looking up, bleary-eyed): “I am honor-bound to God and country to discontinue our friendship. I hope you have a nice life.”

OK, fair enough. High-cal, unleaded beer is real beer. I get that. But if the alcohol content in unleaded and leaded beers is the same — and in most American lagers, it is — there’s only one reason to continue drinking leaded beer: taste.

I guess I like piss-flavored beer. At least I don’t look like a lard-arse anymore.
— Anthony Mariani