It’s festival time again, and the Fort Worth Opera will be putting on eight performances of three operas over the next three weekends. Mozart’s Don Giovanni opens the series at 8 p.m. Saturday in Bass Performance Hall, and Donizetti’s delicious comedy The Elixir of Love will follow at 2 p.m. on Sunday. The world premiere of Jorge Martin’s Before Night Falls, commissioned by the FWO, will be showcased in the second week. 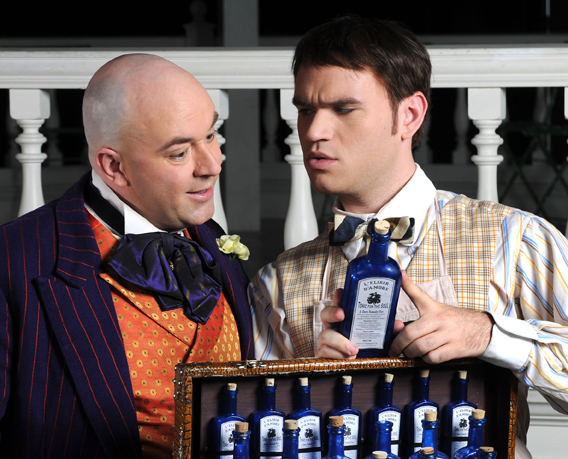 Baritone Michael Todd Simpson, heard here as Enrico in Lucia di Lammermoor two years ago, returns, this time in the title role of Don Giovanni. Winner of the 2006 FWO Guild Marguerite McCammon Voice Competition, Simpson also appeared as Guelielmo in Dallas Opera’s Cosi Fan Tutte last February. The rest of the large cast will be making FWO debuts, including bass Tom Corbeil as Leporello, and soprano Susanna Phillips as Donna Anna. Joe Illick will conduct the Fort Worth Symphony in a production staged by Richard Kagey, who also staged Of Mice and Men here in 2008.

Soprano Ava Pine also returns, now singing Adina in the The Elixir of Love. She is remembered for her aerial performance as the Angel in Angels in America here in 2008, the first soprano to sing while floating on wires over the stage. Pine would go on to reprise the role with the BBC Orchestra in London’s Barbican Centre for the production’s U.K. premiere.

Those who saw the recent PBS documentary on the Metropolitan Opera auditions will recognize tenor Michael Fabiano, who makes his Fort Worth debut singing Nemorino in the Donizetti piece. The conductor will be Stewart Robertson, longtime director of the Glimmerglass Opera Festival in upstate New York and more recently director and chief conductor of Florida Grand Opera in Miami. Elixir of Love is a co-production with San Francisco Opera, Opera Colorado, Boston Lyric Opera, Pittsburgh Opera, and Michigan Opera Theater. –– Leonard Eureka