The recently closed Snookie’s Bar and Grill on South Hulen Street was never a temple of great food, although the place had fabulous deals on alcohol and served food late at night. Still, that part of Hulen doesn’t exactly look like an area screaming for a brand new bar/restaurant. So you might question the name of the place that went into the space last month. Does the neighborhood want, or need, a Tavern? 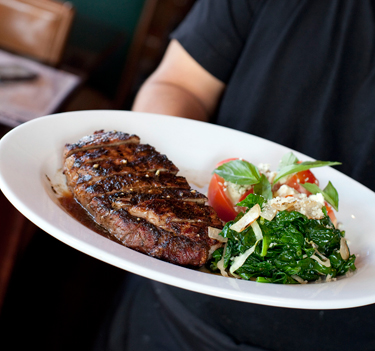 If it’s this kind of tavern, the answer is a resounding yes. The Tavern is a family-friendly joint owned by the father-and-son-team of Felipe Armenta Sr. and Jr., with Junior having done his time in fancy West Coast chain restaurants. The family also owns three eateries in the West Texas town of San Angelo. Accordingly, The Tavern is a haven of mostly Tex-Mex goodies.

Although the outside hasn’t changed much, the inside has undergone a massive facelift. Sophisticated red and black décor elements make the place look a whole lot more attractive than your average tavern. Although the place does have a nice-looking bar, a bunch of TVs, and some great weekday happy hour specials, it’s mostly a restaurant (and is non-smoking).

Two of the least expected appetizers on the menu are the deviled eggs and fire-roasted artichokes. Don’t pass on the deviled eggs: five egg halves stuffed with whipped yolks blended with lemon, peppers, bacon, and chives into lovely little chunky messes. Though they may have been a tad salty, they were still addictively good. The artichokes were not as successful, though they were visually stunning. Served with a roasted lemon (a nice, unique touch) and a creamy, smoky chipotle mayonnaise sauce, the hearty veggies had been grilled to perfection and tasted good enough but were difficult to pick apart. My guest and I didn’t have the chutzpah to finish the plate.

The pork ribs were almost a cliché. They arrived in a sweet, smoky sauce, and the meat literally fell off the bone. In fact, the menu describes the ribs as “fall off the bone,” which my dining companion and I noted with little sneers. But as we were stuffing our faces, we realized the hype was actually the truth. Yes, they were messy and embarrassing to eat, but the meat was so good that we didn’t care that our sleeves were covered in sauce. The rib plate came with shoestring fries bathed in some kind of tasty grill spice and with average coleslaw.

The Tavern also offers a half-dozen taco options. The brisket taco plate amounts to five scrumptious, small homemade corn tortillas stuffed with juicy brisket and smothered in a tart, spicy tomatillo sauce and cheese. The brisket itself was so moist it hardly needed the mildly spicy finishing sauce. The cooks went a little crazy with the cilantro, though –– fair warning if you don’t like the green stuff. A dollop of fresh, chunky, slightly spicy guacamole and a side of whole black beans atop surprisingly tasty, flavorful white rice accompanied the plate.

Chef Felipe Jr., who was making rounds in the dining room, told us that everything is homemade. That being the case, my guest and I opted for dessert. The dessert menu isn’t officially set, but I hope that you visit on a day when the banana cream pie is being served. Fresh bananas sliced lengthwise and topped with fresh whipped cream, smooth pudding, and chocolate chips. The dessert was garnished with homemade caramel sauce, the kind that’s finished almost like crème brûlée, just short of burnt. The carrot cake slice was gigantic and covered in a snowy avalanche of almond-studded cream-cheese frosting. Moist and filled with nuts, the serving was seriously too big for two people to eat in one sitting.

For a place that’s newly opened, The Tavern is running amazingly smoothly. The service was impeccable, comparable to that of any of the better restaurants in downtown and Sundance Square.