Eddie Deen’s Crossroads, in the shadow of Cowboys Stadium, isn’t actually located near a crossroads. Unless, of course, you consider the intersection of Overpriced Parking and Horrible Traffic to be some kind of junction. The original Eddie Deen’s concept is simple: four meats, four sides. Not dramatically innovative. However, the Dallas-based chain’s been doing fine with this formula for more than two decades, and the new Arlington establishment is no exception.

Of the four meat choices, our table liked the jalapeño kielbasa the best. It was the spiciest, thanks to little studs of real jalapeño in the sausage. It was also the juiciest — the meat pops when you bite into it. It’s not grease-running-down-your-chin moist, but there’s a lot of, um, Vitamin G. The ranch-style beans were also jazzed up with nuggets of sausage and brisket, which made the side one of the meal’s better offerings. Be advised: The sausage packs a bit of mouth after-burn so have a full glass of whatever you’re drinking handy. (I counted six beers on tap, plus the standard array of carbonated beverages, tea, and lemonade.) 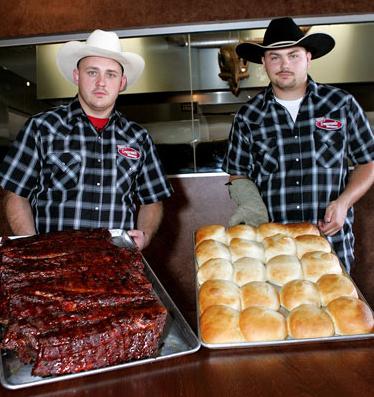 The traditional sliced beef featured an almost unbelievably gorgeous, cherry-pink smoke ring around the edges. The meat was on the lean side: not dry but just a little chewy. It wasn’t melt-in-your-mouth tender, either, but the delicious smoky flavor permeated the meat. You really didn’t need the sauce, but it was good if you opted for it.

The barbecue sauce is of the spicy-sweet variety, less vinegary and more peppery than what you may be accustomed to in these here parts I prefer the vinegary version, but Eddie Deen’s brand grew on me, especially when I mixed it with the chopped beef and smeared it over one of the homemade buns. The buns were the size of old 45 records ­­–– Big Momma size –– and came out sliced, buttery, and grilled Texas toast-style. By itself, the bread was delightful. Adding the savory chopped beef and the sweet sauce made for an excellent, if spectacularly messy, sandwich.

The smoked chicken was the saltiest of the meat offerings. Mixed into the beans, the chicken tasted fine, but I’d recommend more of the sausage or the really good ribs instead. The ribs weren’t falling off the bone, but they were lovely: substantial and remarkably lean. Fortunately, the sampler plate offers you a choice of all of the options. Although the menu says the plate serves four, there’s no mention that you can help yourself to as much of the beans, potato salad, and coleslaw as you can eat. That stretches the “serves four” to “serves five” or maybe even six. The sides also include pickled okra, dill pickles, jalapeños, and onions.

The potato salad was surprisingly good. The mustard-heavy, tangy, slightly spicy dish didn’t have any funky sweet pepper diced into it, which was a plus. The coleslaw was average but very fresh, and adding a little of it to the chopped beef sandwich produced a nice crunch. In addition to the fabulous meat-laden beans, the fries are the real glory of the sides and worth the extra cost. Hearty, skins-on, and bathed in some sort of sweetly salty rub different from the rub on the meat, the fries were absolutely a cliché of finger-licking-goodness.

If you eat too many fries, you may have to take your dessert to go. Predictably, your choices at Eddie Deen’s are limited: It’s all pie. The menu lists chocolate pecan and vanilla buttermilk, but there are more options courtesy of the restaurant’s experimental pie lady. We chose a buttermilk Oreo pie and a chocolate Heath bar pie. Both featured rich filling atop flaky, homemade crusts. It was really more about what you were in the mood for: sweet vanilla with a little crunchy Oreo cookie or dense, rich chocolate delicately studded with a caramel crunch. Either way, the pie was good.

There is really an Eddie Deen, and he’s a generous son of a gun. In addition to catering for both Presidents Bush, Deen fed thousands of Hurricane Katrina refugees in the Dallas Convention Center, as well as the TXU crews trying to clear the roads after Katrina and Rita. Say what you will about the one-page menu with its repetitions of four, four, and two. If you’re passing by JerryWorld, you could do a lot worse than finding yourself at Eddie Deen’s Crossroads.