I could say a lot of things about my time working at Chili’s, but I did like the way the company organized its bar. For the most part, the layout maximizes efficiency, essential for those times when the flow of a busy night is held up by a bunch of children’s frozen drinks. Of course, there also was plenty about the Chili’s bartending experience that lent itself to ridicule; in particular, the training manual’s section on “flair.” 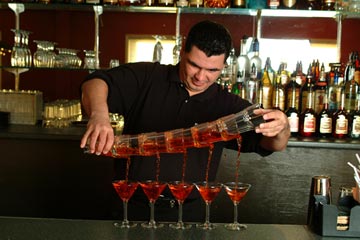 In chain resto-speak, “flair” has different meanings depending on the company. Most folks’ understanding of flair has to do with the decorative crap worn by the Chotchkies waiters in Office Space, so I should probably be specific. At Chili’s, the word refers to the sort of bartending jagoffery made famous in Cocktail, like juggling bottles, spinning martini shakers, and executing other nonsense that might make a leathery middle-aged woman drinking margaritas at 11 a.m. want to sleep with you (or at least upgrade to the rib-eye). Not surprisingly, I didn’t master any of it.

I didn’t bother practicing because I thought flair was inherently dumb, and trying to excel at Chili’s suggested I was OK with abetting a soul-sucking corporation in the name of fake fun. At least that’s what I told myself. The fact is I knew I’d just never have the chops.  See, secretly, I’d love to be able to yank a bottle from the well, flip it into a 540-degree spin, and await the appreciative rain of control-top panties. But I’m a klutz — sometimes it takes me three tries to pop the cap off a bottle, and the one-handed, two-bottle pour usually means your drink will have inversely proportioned ingredients. Hope you like your Long Islands with extra gin. I hated on flair because I sucked at it, which is ridiculous motivation for contempt. If all people hated things they sucked at, no fat guy would ever watch basketball.

Regardless, watching bartending flair is actually pretty awesome, even if you’re not a divorcee ashing a Misty 100 next to a well-done sirloin. For example, on Friday night, I rolled into Poag Mahone’s in between the end of the Pinkish Black show at Lola’s and the beginning of the Quaker City Night Hawks’ gig at The Moon. Waiting to order some beers, I saw co-owner Will Wells behind Poag’s bar, lining up a row of drafts and stacking their rims with shots of amaretto. He lit some 151 with a lighter, took a swig, dipped his fingers in the flames, and then blew a fireball across the bar. With a tap of his finger, the shots knocked over like dominoes, dumping the flames in the beers, thereby crowning a round of Flaming Dr Peppers.

I don’t remember if the Chili’s Star Bar Manual had instructions for Flaming Dr Peppers, and if it does, it probably doesn’t mention Will’s Dhalsim-esque style points. But I must admit now that if I find myself at a Chili’s cramming boneless buffalo wings in my face, I hope I see a bartender do something cool. –– Steve Steward

I live in the neighborhood, so I’m partial to new businesses opening on the South Side, particularly the kind that trade in alcohol. If you live over there, you’re likely anticipating Bill Smith’s Live Oak Music Hall and Lounge and the Zio Carlo Brewpub. It’s gonna be awhile longer, so why not cool your heels with a happy hour cocktail on Cat City Grill’s refurbished patio? Cat City’s happy hour features $2 domestics and $3 drafts and wells, and the patio has the right amount of sun and shade. And if you’re tired of places that don’t serve booze in slushy form, Cat City offers a drink called Frozen Panther Punch, combining raspberry rum, lemonade, and lime into a kind of easy-drinking, grownup slurpy that, if drunk by a pool, just about guarantees you’ll get sunburn. So, uh, good thing Cat City doesn’t have a pool. Yet. –– S.S.