I’ve heard complaints about Tinker Tailor Soldier Spy from those who haven’t read the John le Carré novel on which it’s based or seen the celebrated 1979 BBC TV miniseries adaptation of it. Newcomers find the current film version murky, a detective story set in a world where all the players are indistinguishable buttoned-up British white guys spouting impenetrable spy jargon. I can see a few points in the film where newcomers might plausibly be confused. So this movie will probably play best for those moviegoers who’ve done their homework, but even strangers can appreciate the craftsmanship in this intelligent re-telling. 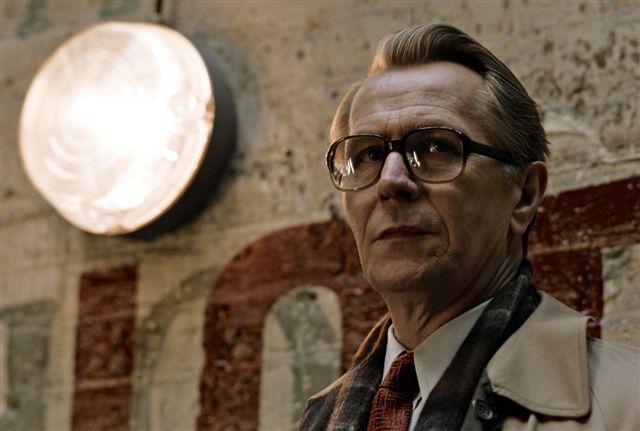 The story picks up in 1974, with former MI6 operative George Smiley (Gary Oldman) being approached by his former bosses with a tip that one of the four men in charge of the agency — The Circus, as it’s known in the trade — is in fact a double agent passing on state secrets to the Soviets. Forced into early retirement after a botched spy mission the previous year in Hungary, Smiley now has a chance to find the mole responsible for the mission going wrong and snatch his old job back, but the suspects are all skilled liars, and the culprit will scuttle behind the Iron Curtain at the least hint of an investigation.

This is the first English-language film directed by Tomas Alfredson, who made the insinuatingly atmospheric 2008 Swedish vampire film Let the Right One In. Those qualities serve him well here, as he and awesomely named Dutch cinematographer Hoyte van Hoytema capture the dowdiness of cold-war Britain in a most stylish way. You can almost feel the rising damp coming from the leaky pipes in MI6’s offices. Alfredson frequently photographs characters behind glass partitions or framed within frames to increase a sense of claustrophobia. The layered compositions mirror the way the truth is buried under layers of deceit. Lest it all become too oppressive, Alfredson makes some puckish musical choices on the soundtrack, including a tense scene at an MI6 archive set to a silly tune by singer-comedian George Formby. (A character plays it over a phone to convince the agency’s phone tappers that he’s talking to his auto mechanic.)

The film boasts a murderer’s row of terrific British actors that includes Colin Firth, Toby Jones, Tom Hardy, Mark Strong, and Ciarán Hinds. Yet they’re curiously muted, perhaps because their roles have been reduced to shadows in the adaptation process. John Hurt shows flamboyance and bluster as the outgoing head of MI6, while Simon McBurney plays a cabinet undersecretary who responds to some dire warnings about World War III by buttering a piece of toast with pointed nonchalance. These are nice touches, but they don’t add up to strong supporting characters.

As for the main character, Oldman speaks all his lines in the measured cadences of a careful man who spends much of the film asking questions of the other characters. He can’t match the hooded watchfulness that Alec Guinness brought to the part in the TV miniseries. His surname notwithstanding, Oldman is too young for the role at 53. Still, he excels as an investigator who raises his voice only slightly while he’s confronting the traitor at the end. Despite his lack of volume, this Smiley still manages to project as much conviction as he would at full roar. In that way, his performance exemplifies the quiet strengths of Tinker Tailor Soldier Spy.