The Flying Pig Pit BBQ and Tavern’s address in Mansfield is on Matlock Road, but really the joint is just off Country Club Road in a little strip mall. This is important, because your satellite navigational device is likely to lead you astray, and there’s no telltale pit smell from three blocks away to guide you. The Flying Pig does smell like a ’cue joint, but the aroma isn’t overwhelming and doesn’t linger in your hair for days. The restaurant occupies one chunk of the little shopping center, and the tavern occupies another, with a small pass-through door between them. The restaurant is extremely family-friendly — the tavern, not so much. 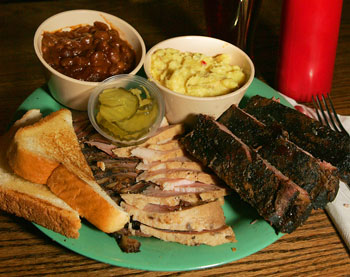 A plethora of fried and non-fried appetizer options, including the exotic (cheese curds) and the odd (Three Little Pig taquitos) crowd the menu. However, the main features are the generously portioned meat plates and sandwich baskets (with fries, shoestring-thin and covered in an addictive sweet-savory coating). There is no veggie plate; the restaurant barely nods toward the non-carnivore.

The combos are a great way to sample the good, the bad, and the ugly of Flying Pig, with a little ’50s nostalgia thrown in for free. They’re served on old-fashioned, cafeteria-style round plates that are divided into three compartments, helpful for folks who don’t like to have their foods touch one another.

With seven meat choices and 14 side options, you could spend half a year trying to order. One way to simplify: Skip the turkey. Lovely in the Pig Pen club sandwich, the meat on the combo plate was cold, rubbery, and way too heavy on the smoke flavor.

The sliced brisket was better. Although the meat barely had a little cherry-red ring on the outside, it was tasty and moist sans barbecue sauce. But the ribs were another disappointment: overly peppery skin and unforgivably fatty meat.

The pulled pork more than made up for the ribs. The generous pile of shredded, moist meat was was a revelation of soft, smoky goodness, so flavorful and tender that you didn’t even need sauce.

At the Pig, the meat comes out unadorned, and diners can choose regular or spicy barbecue sauce, both served out of little squeeze bottles. The regular sauce is good–not-great. It’s a little on the thin side, but the flavor is well balanced between sweet, tart, and spicy. The spicy version is just a notch higher in heat and similar in vinegary kick.

For sides, the addictive fries are only one of three fabulous potato offerings. Even if you don’t favor cheap yellow mustard, the classic mustard potato salad was divine: tart with nice, firm, chunky spuds. The baked potato salad was very much like loaded mashed potatoes. Creamy, with a dairy’s worth of sour cream and butter, and slightly zesty from the chives, the dish was fabulous. Also worth sampling: the barbecue baked beans, a nice, sweeter-than-average take on ranch beans. And the jalapeño creamed corn was fabulous: spicy but not overpoweringly so and unique to the Flying Pig. Skip the coleslaw, though. It was distressingly limp and too peppery.

Desserts are where the Flying Pig really excels. Although it was not homemade, the pecan cobbler, served a la mode, was a bowlful of soulful, crunchy, sweet perfection. The peach cobbler was also quite tasty but couldn’t beat out the pecan. And the banana pudding was absolute homestyle goodness, heavy on the banana, with no Nilla wafers to get in the way.