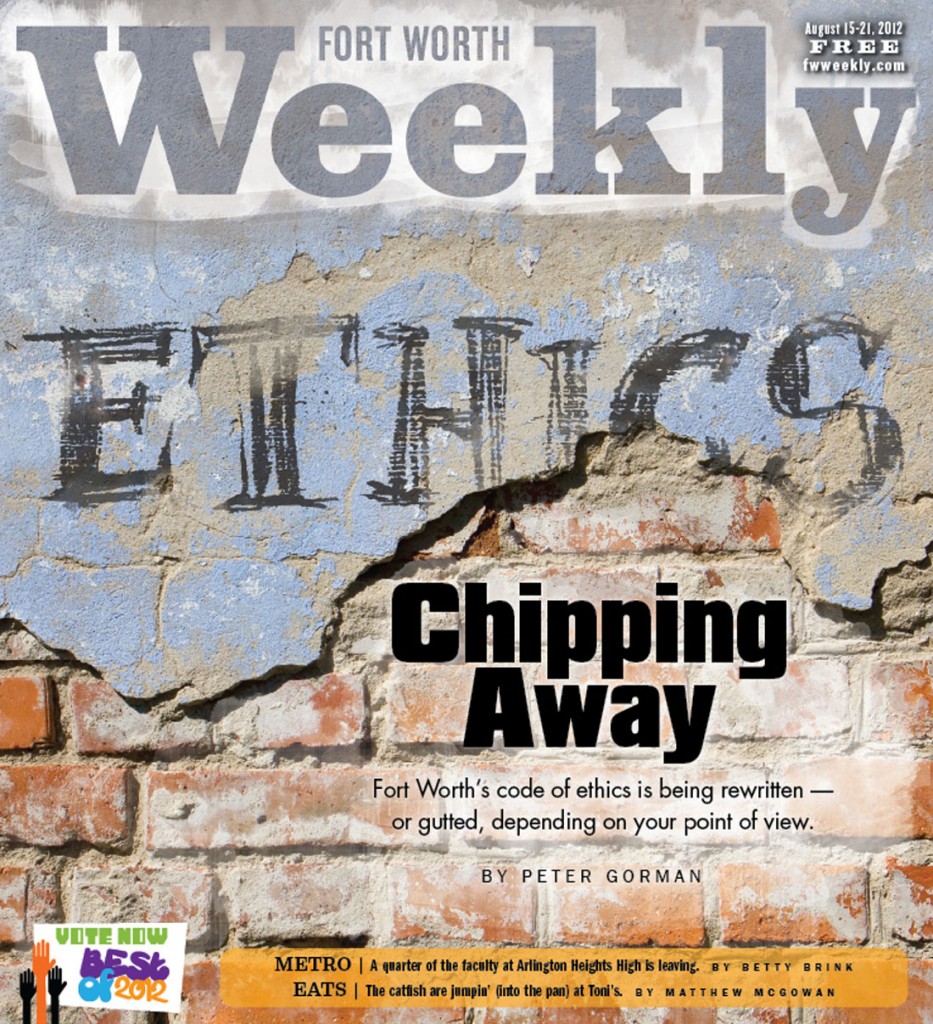 So, Fort Worth Weekly was taken to task publicly by members of the Fort Worth City Council on Dec. 4. Oh woe is us, oh … oh, wait just a danged minute.

The occasion was a consent agenda item regarding the new, slightly eviscerated city code of ethics, expected to be quickly heard and passed with little or no discussion. But when a group of citizens arrived at the meeting with something to say about the code changes — detailed in the Weekly’s Aug. 15 cover story “Chipping Away” — the item was given center stage. Among the rabblerousers were some of the perennial thorns in the council’s side: Jim Ashford, Jerry Lobdill, and Gary Hogan.

What were they complaining about? Things like the proposal that the council no longer be obligated to reach out to the community to recommend ethics panel members. And the change that would give a pass to any city employee or member of the council, committees, and advisory boards, so long as the person had been told by the city attorney (who is hired and fired by the city council) that an action was not in conflict with the ethics code.

A third change — potentially the most far-reaching — would allow advisory board and advisory committee meetings to be exempt from the Texas Open Meetings Act, something that state law allows but that previously had been banned by the city’s code.

After Ashford and the others had explained their objections, council member Dennis Shingleton said he thought there was a lot of confusion about the proposed code changes, caused by “one of the newspaper journals of the city [which] put out an article that was both fallacious and full of half-truths, in my opinion.”

The reference would be to the Weekly, of course, which stands by its story and hadn’t heard any complaints of errors up until the council meeting.

Shingleton added that it was nonetheless important to postpone the vote in order to have a public hearing on what he called the “tightening up” of the code.

But the council — most of whose members routinely fail to call back Weekly reporters seeking the council’s side of city hall stories — wasn’t done with us. Mayor Betsy Price noted that advisory board meetings would still be posted and open to the public, despite the code having written them out of that obligation.

All righty, then — so why state otherwise in the code, and what would the city do to enforce Price’s assertion if city boards did start meeting secretly? That’s what that thing called an ethics code is supposed to be for.

Then council member Danny Scarth called the Weekly’s cover story “a pretty poor job of reporting when it claimed that all boards and commissions would be declared advisory and therefore not subject to the Open Meetings Act.” Wrong. Weekly staffer Peter Gorman wrote, accurately, that the “current city code makes no distinction between official boards and advisory boards. Under the proposed revision … advisory boards would not have to post meetings, allow the public to take part in meetings, or even keep minutes that would be available to the public.”

Seems council members had read the Weekly’s story about as carefully as they read the proposed ethics code revisions. If that “pretty poor job of reporting” helped convince the council to take the ethics code proposals seriously, Static and its colleagues can live with the rest of it.