The five members of Koe Wetzel and the Konvicts snaked their way through the crowd at White Elephant Saloon last night.

Then they disappeared into a darkened back room.

An employee poked his head in to see what was going on.

“They’re having a group prayer,” he said.

I started to say, “They must be Kristians.”

But then I realized that would only be funny in print.

So I saved it for today’s blog.

The Konvicts eked out a win in an earlier round of the 9th Annual Texas Music Showdown (“Koe Wetzel & Konvicts Steal White Elephant Saloon Contest,” Feb. 27, 2014).

They didn’t blow away the judges or the crowd that night.

To make matters worse, last night the band was squared up against the irrepressible Big Joe Walker.

The guitar-slinging, piano-pounding, soulful crooner blew away his competition during an early round (“Big Joe Walker Stands Tallest At White Elephant Showdown,” March 6, 2014).

Prayers were definitely in order for the Konvicts.

(Not sure how that prayer would go: “Dear Lord, please shine your wisdom, guidance, and spirit on us as we strive to kick Big Joe Walker’s ass and move on to the finals, win the prize, land coveted spots on the Larry Joe Taylor and Tommy Alverson music festival shows, get discovered, become rich and famous, and snort coke off strippers’ asses for the rest of our lives. Amen.”)

The song’s elongated instrumental introduction slowly built up tension and drama before the band simultaneously exploded into what could easily become a new hell-raising classic.

He followed that with the stellar “Friday Night In Texas,” which has been getting radio play lately.

But he slowed the pace for a couple of songs and it sucked the wind out of his set.

Walker finished by reprising his cover of Jimi Hendrix’s “Red House.” The song brought down the house during an early round of the competition, and it had the same effect on last night’s crowd.

Walker appeared to have victory clinched in his big ol’ hands.

But something unexpected happened.

Wetzel’s bunch hit the stage with a vengeance, played with fiery abandon, and, as they say in the bidness, left everything on the stage.

They opened with a reinvigorated version of the pop standard “Ain’t No Sunshine” by Bill Withers, and then tore into a handful of up-tempo original songs that had the crowd buzzing.

Even after they slowed down the pace, the intensity never waned.

After they finished, it was up to the judges — myself, Rodney Parker (of the 50 Peso Reward band), and KHYI 95.3 radio personality Brett Dillon to choose a winner.

I’d seen the Konvicts play before, but last night they sounded better than ever.

I accused them of being on steroids and threatened them with disqualification.

Wetzel said they’d merely eaten their Wheaties before the show.

The band members were given blood tests, and, sure enough, only Wheaties and beer were found in their systems. They remained in the running.

Talk about a close race.

Dillon wanted to call it a tie and allow both bands to advance to next week’s big finale.

Parker and I said the bands deserved a decision, the crowd wanted a winner, and we as judges must muster up the cajones to make the tough call.

So by the slimmest of margins the Konvicts nabbed the win.

At next week’s final they’ll face the seemingly insurmountable Buffalo Ruckus for the big prize, which includes all kinds of music equipment and recording studio time.

Ought to be a great show next Wednesday night. 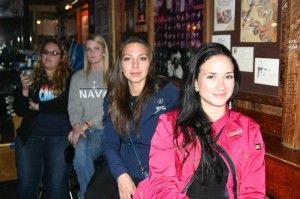