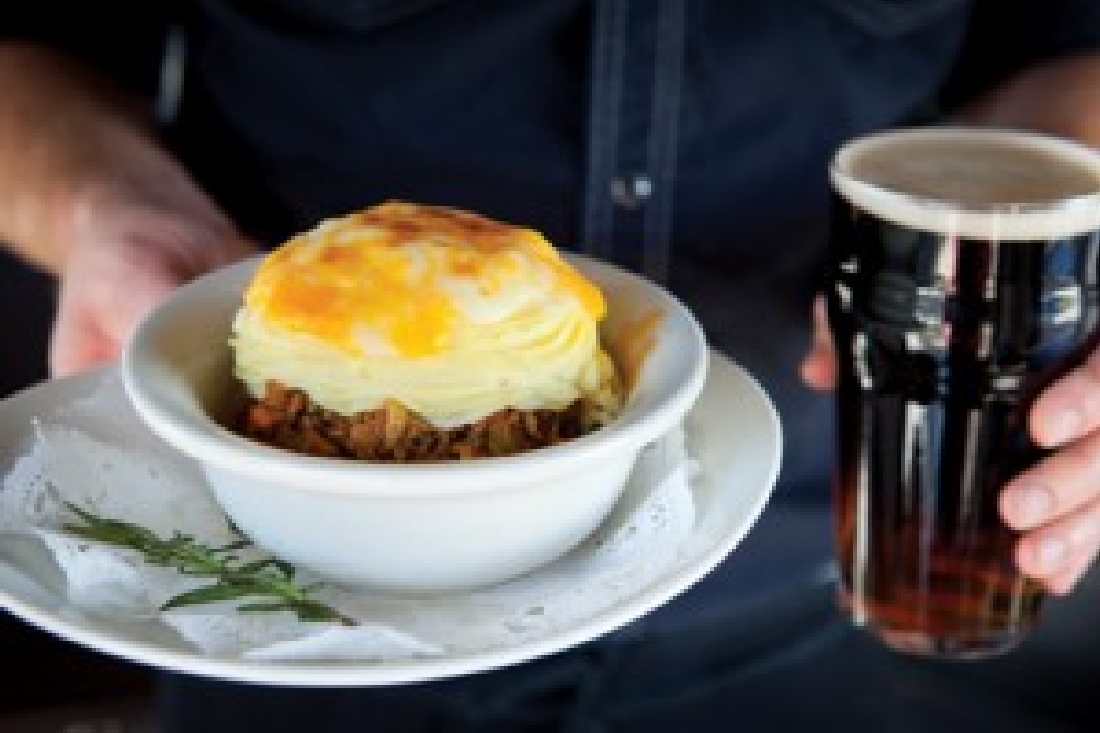 I used to think of Baker Street Pub & Grill as a pretty run-of-the-mill place –– until I found myself turning into a regular. (It doesn’t hurt that it’s near my apartment.) For all my devotion to small businesses and dive bars, I’ve come to appreciate the joys of hanging out at a mid-sized chain, mostly for day drinking.

If the name doesn’t already tip you off, Baker Street is an English pub generally themed around Sherlock Holmes, which seems to be just a pretext to give menu items like sandwiches and appetizers names like the Elementary Burger and Watson’s Chicken Tender Platter. I started going there during football season last year in my annual attempt to keep up with my hometown team, the 49ers. Baker Street has plenty of TVs, and most of the seats offer good views.

Inside, it’s about what you’d expect from an English pub: tidy, lots of dark wood, and even a carrel where you can find a British newspaper. You can also find, like, 30 beers on tap. Overall, the drafts tend to skew toward whatever Baker Street’s distributor seems to be trying to push, as opposed to interesting brews (local, craft). It might not wow hardcore beer enthusiasts, but I tend to stick to light beers during the day anyway, and Baker Street has a lot of those.

Baker Street also has free pool on Mondays, and despite such a sweet deal, the purple-felted tables are usually pretty empty until happy hour rolls around — if you’re bored on a Monday and not at work, Baker Street should be on your list of hangs. Otherwise, I recommend taking a long lunch. You’re not going to be blown away by the menu (burgers, assorted sandwiches, and fried fare, plus English pub faves like shepherd’s pie and bangers and mash). But the aforementioned Elementary Burger is pretty solid. Basic but solid.

The only foreseeable problem is someone lighting up nearby. Baker Street is a bar, first and foremost, and it’s a bar in Fort Worth. Expect to get a bit of secondhand smoke in your hair, on your clothes, and in your lungs. That, unfortunately, is often the price you pay for drinking in this town, but at least the staff here is attentive and amicable enough to make up for a handful of customers fogging you while you’re trying to enjoy a Welsh open-faced sandwich or a Scotch egg.

I’ve never been to England, and I don’t really care about Sherlock Holmes, so I can’t honestly tell you if Baker Street is true to either. But for a comfortable spot to kick back, drink some beer, and eat some heavy food, this place does the job. –– Steve Steward