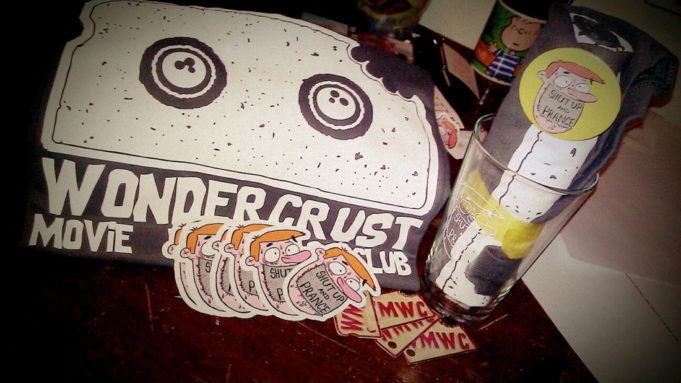 Nick McClanahan stared at the projector screen in front of The Grotto, a Monticello rock venue, on a recent Thursday night among two dozen other folks. The images were playing, but there wasn’t any audio.

Any other comedian might have gotten frustrated or maybe would have given up altogether. But McClanahan is a member of the Wondercrust Movie Watchers’ Club, a group that provides live commentary over movies on a monthly basis, much in the spirit of Mystery Science Theater 3000, an immensely popular 1988 Comedy Central show.

So, true to the Wondercrust ethos, the 31-year-old Fort Worth comedian decided to crack a joke.

“April Fools’!” he exclaimed to the audience. “This is actually a giant gag on you!”

The audience’s reaction was pretty typical for a Wondercrust production: enthusiastic laughter.

The Wondercrust Movie Watchers’ Club is the brainchild of Shut Up and Prance, a Fort Worth comedy troupe co-founded by Naaman Rodges and Riley Morris in 2011. Club members host shows where their comedians and some guests perform live commentary over old B-movies, especially ones that are generally considered bad or pompous.

“Somebody once said something about Wondercrust, and they were like, ‘Oh, I know those guys! Mike’s a really good friend of mine!’ ” McClanahan recalled. “And there’s never been a Mike in the group. We were like, ‘We reached the hipster stage guys! People are lying about wanting to know us!’ ”

Club members host these shows on the last Thursday of every month, usually at The Grotto. There used to be three to four writers in the club during its nascence, but now there are about a dozen. Rodges said their screening schedule depends on how lazy Wondercrust is that month. The group took the whole month of February off altogether.

“So, technically, we’re already lazier than we’ve ever been in the past three-and-a-half years,” he said.

Rodges has always been a fan of film, even before Wondercrust began. He recalled how he used to work at and volunteer for film festivals around the area, where he quickly learned how drab and super-depressing they can be. He sourly recalled one short in which a mother raped her son because she was raped at his age. Rodges can name a long list of other examples beside that.

“If you ever go to a film festival, it’s very pseudo-intellectual, and everyone likes to seriously critique,” Rodges said. “It’s like walking into a museum. Everybody has this very pious, very thoughtful face when they’re watching somebody’s films, and it’s just fucking boring. It’s real fucking boring. I’m sorry, independent film scene in Dallas and Fort Worth, you’re borrring.”

He made a further comparison, saying that the North Texas film scene is like going from a creativity boner to a flaccid wiggle.

The first movie the club featured was 1959’s Teenagers from Outer Space, a science-fiction movie that featured screaming lobsters as alien stand-ins. Rodges said his group’s first experiences at writing the script for and performing the show were rough. It took four weeks to write the 10-page script, and the actors were timid delivering their lines over microphones.

Today, the team has become more streamlined by incorporating a stronger group dynamic within the scriptwriting process.

“We’ll sit here, we’ll record audio, we’ll watch the movie, and we’ll just throw out jokes,” Rodges said, “throw out things that we think are funny, throw out video clips, and all of that gets recorded.”

And that’s exactly what they did for two and a half hours during the club’s first screening of Cyborg 2087. The opening credits didn’t even finish before the comedians were already cracking jokes at the screen.

“Joe Wonder?” McClanahan yelped at one of the screen credits. “Why does he wonder?!”

“Chubby Johnson,” Rodges quipped at another. “Yeah, I got one of those.”

Sometimes, the jokes don’t sit well with audiences. In Wondercrust’s screening of 1967’s Prehistoric Women, attractive blondes were shown being traded to black tribesman for “sacrifice.”

Considering three white dudes were providing the commentary, it wasn’t surprising to see why the audience wasn’t exactly cracking up.

Rodges, though, doesn’t think you should be shy as a comedian. Those three letters aren’t in the word anyway, he said.

“I don’t want to hurt anybody’s feelings or sensibility, but when you’re doing comedy, it’s either all in or all out,” Rodges said. “You can’t pussyfoot about it.”

At the same time, though, he doesn’t think comedy should be afraid of confronting touchy subject matter.

“Comedy can draw attention to these issues,” Rodges said. “Blazing Saddles. Amazing comedy that put a big fucking dent in racism. Because it made it look stupid and ridiculous. And if that’s what we can do, then that’s what I want to do.”

And Wondercrust is doing it. At the conclusion of the April show, the comedians had made viewers laugh, gasp, and grin from ear to ear via witty and snarky commentary.

Rodges said you can always expect something different from Wondercrust.