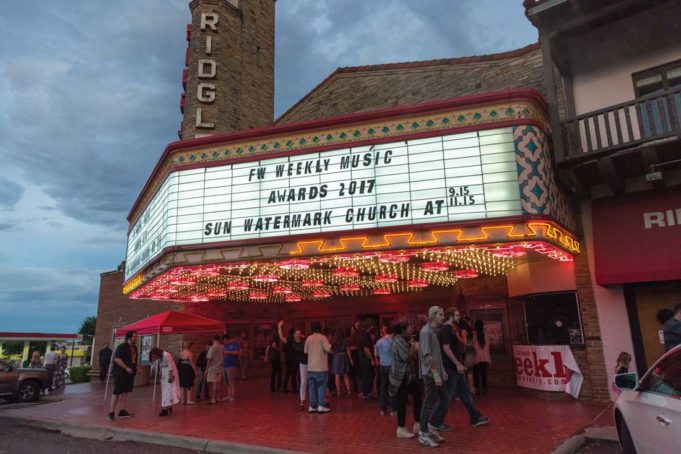 I’m stuck in a post-Music Awards malaise. After months of planning, begging, and coercing, the Music Awards season drew to a close after Sunday night’s ceremony at the Ridglea Theater. I’m adrift in a sea of nothingness, bobbing and eddying with no purpose – except, you know, my day job, family, and life.

If you missed the awards ceremony, this recap isn’t going to convey the sincere warmth and boozy enthusiasm that permeated the crowd of about 750 musicians, fans, and well-wishers. I humbly assert that Sunday’s ceremony was the best one yet, and we’ve now produced 16 of these.

The crowd’s energy bubbled over from the very beginning when Toadies frontman Vaden Lewis opened the show with a two-song acoustic set (“I Come from the Water” and “Tyler”). Lewis’ voice and charisma haven’t faded a bit since I first saw the Toadies at the Engine Room in the mid ’90s.

Every ceremony, we induct local musos into our virtual hall of fame. This year, we not only inducted three new members, but the crowd got a taste of their music. Each performance was emotionally wrought.

Kathleen Jackson, along with Michael Price and Harris Kirby, played a touching tribute to her brother Greg Jackson, who recently passed away. The trio and their families couldn’t contain their emotions after the song. That quiet, sincere display was a salient reminder of why we do the hall of fame. We honored a great musician, and it truly mattered to the ones he left behind.

Speaking of water works, the evening’s second inductee, James Hinkle, streamed tears as he watched from side-stage as his daughter gave a stirring introduction — Hinkle didn’t know she’d be speaking. The venerable bluesman needed a few attempts to start his speech without breaking down. After a few words, he and his accompanying band of bassist Lee Allen, guitarist Big Mike Richardson, and drummer Lucas White played a scorching 20-minute set.

The night belonged to the Burning Hotels, who played a full show for perhaps the last time. After the band’s longtime producer Will Hunt gave a poignant, earnest induction speech, the four-piece treated the wound-up crowd to a high-energy, polished performance worthy of a sendoff for one of Fort Worth’s most influential and badass bands.

For the awards part of the ceremony, the big winners were Mean Motor Scooter, who took home awards for band, EP of the year, and artist of the year; Matt Tedder, who won for blues, vocalist, and guitar (his drummer Matt Mabe also won a Panthy for drummer); and Taylor Craig Mills, who won two individual awards for acoustic and bass player, and his band Un Chien took home rock album of the year. Holy Moly, Squanto, and Dead Vinyl each walked away with a pair of trophies. For a full list of the winners, go here.

Thanks to everyone at the Ridglea for hosting the party. The venue was stunning, and the sound system and lights were top-notch. Besides the storm briefly knocking out the power, the production of the event was flawless.

I’d also like to thank our presenters, Bud Light and Ben E Keith, both of which are local music stalwarts, and our supportive sponsors Topo Chico and the United Way of Tarrant County. We couldn’t have made it through the evening without R Taco’s sustaining grub. This year’s Music Awards journey began, as it does every year, recording our annual compilation at Eagle Audio Recording. Of course, we owe a huge debt to the musicians, producers, booking agents, and fans who showed up the festival and the ceremony.

Finally, I have to thank our small but dedicated staff for always giving up their weekends, working tirelessly, and going above and beyond what we ask of them. It takes a special breed to work at the Weekly, and just know that we really appreciate everything you do.

Now that the hugs, handshakes, and high-fives are over, I guess it’s time to start the year in Fort Worth music all over again — and I can’t wait to see what it brings.