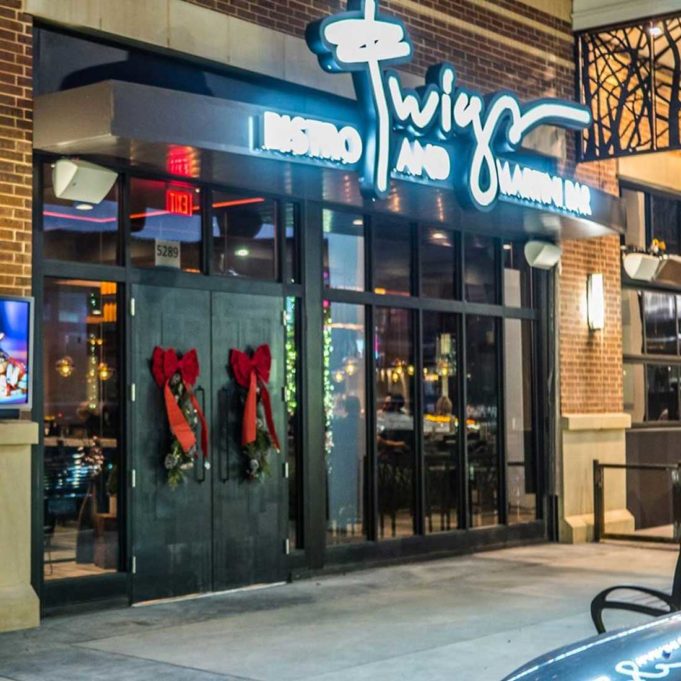 For all the meals I’ve reviewed there in the past year, the Shops at Clearfork can still feel like a high-end prosthesis that may yet be rejected by its host city. The generic-looking luxury development doesn’t quite feel like Fort Worth — but then again, new stuff often doesn’t at first. The offering of higher-end chain eateries serving customers of Neiman Marcus and Tiffany & Co. doesn’t quite feel like Cowtown, either, but the slick concept restaurants populating the block tend to know their business and put out a pretty good spread.

Twigs Bistro and Martini Bar fits right in with the neighborhood. The Spokane-based chain features a something-for-everyone menu that is, while basically a delivery device for the cocktail program,  well-executed and thoughtful enough to stave off comparisons to, say, Applebee’s — which would be unfair. Still, the menu is too wide-ranging — even unwieldy — and too standardized to make it a foodie destination. Competence (rather than creativity) is the strong suit of the kitchen. The place offers low-risk, relatively high-reward comfort food for tired shoppers –– and it’s served with plenty of booze.

My guest and I visited for lunch on a lazy holiday weekend, and we had the spacious dining room nearly to ourselves. With a reasonably tasteful décor (we admired the restraint evidenced in having only one crushed-glass fire feature) and plenty of tempered daylight, Twigs seemed a pleasant enough spot to eat or drink, regardless of the season or the weather.

The staff was pleasant and professional to match, happy enough to make recommendations when asked and (thankfully) not disposed to push caramel appletinis on luncheon diners.

We shared an order of calamari a la Romana, fried squid tossed with sautéed artichoke hearts and onion. The squid itself was cooked perfectly, but the promised tempura crust (the menu takes liberties with nomenclature and geography in a way that’s very nearly charming) couldn’t hold up against the humidity of the onions and artichokes. So we ended up picking plump, purple rings of the tasty mollusk out of the mushy remains of its breading, hoping to spear it with a bit of the onion or fresh herbs.

Entrées come with the option to add on a salad for a slight fee, and I was happy to try the pear and roasted beet salad, tossed with field greens and gorgonzola cheese — a perfect winter’s salad, though sweet enough already without the addition of candied walnuts. The annoyance at having to pick the crunchy sugar-bombs out of my lettuce was lessened somewhat by my excitement at finally getting to use the word “cloying” in a write-up.

My guest ordered the roasted garlic gorgonzola burger, a half-pound of Angus beef that we could barely discern underneath everything that came piled on top of it, including crispy fried onions, chipotle barbecue aioli, and an awful lot of roasted garlic and gorgonzola cheese. So it came exactly as advertised, though it seemed a good choice for someone who didn’t actually like hamburgers and wanted to taste anything but meat.

I was much more satisfied with my entrée of pork osso bucco, which tasted like pork osso bucco. A tall slow-roasted pork shank served beneath a Marsala mushroom sauce was pointed proudly skyward when it arrived at the table. Fork tender, the meat was a cut above what I was expecting from the kitchen at this point, and it was the sort of dish that might bring me back on a return visit. Served with sour cream and chive mashed potatoes and a medley of sautéed squash and cherry tomatoes, the wintry dish stuck to my ribs as readily as it fell off its own bone.

Whether the world needs Twigs is a question beyond the scope of this article, but it’s a fair bet that the Shops at Clearfork benefit from the presence of the bistro, as it will appeal to two key groups of shoppers: 1.) those who are really into martinis and 2.) those who can’t agree on where else to eat. Maybe having something for everyone is its own kind of niche.