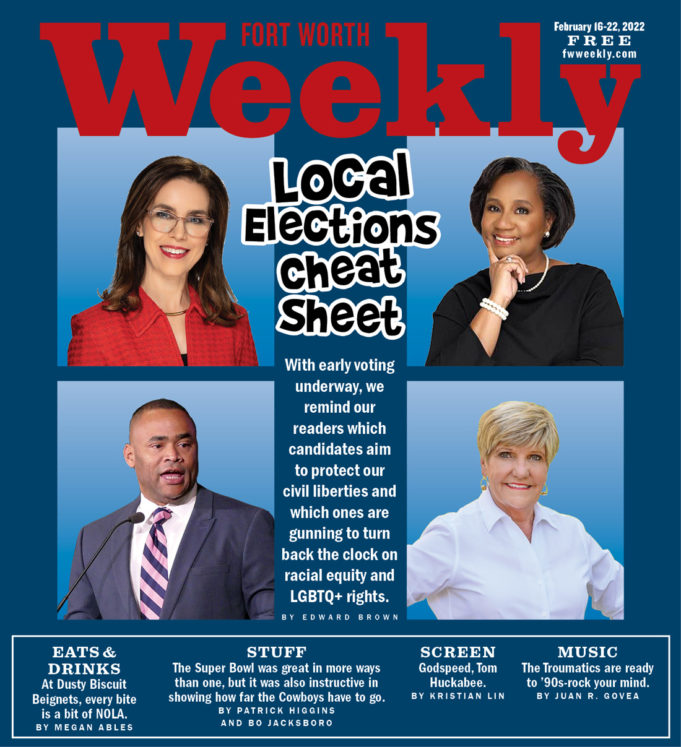 If times were simpler, ballot choices would be public referenda on taxation, government policies, and spending priorities. And while those issues largely remain at the core of Tarrant County’s 2022 primaries, these are not simple times. The outcome of the Tuesday, March 1, election will determine what books will be allowed or banned in local public schools and how fairly or unfairly our criminal justice system administers state laws, among other important issues that potentially jeopardize our civil liberties.

Topping the ballot is the governor’s race that many pollsters predict will end in a faceoff between incumbent Republican Greg Abbott and former Democratic congressman Beto O’Rourke. Abbott’s strongest primary contenders — State Sen. Don Huffines and former Texas Republican Party Chair Allen West — have positioned themselves to the right of Abbott by attacking his decision to close businesses during the worst of the pandemic (which likely saved untold lives) and by peddling lies that public schools are selectively punishing white children for this country’s long, deadly, sordid history of racism.

Indicted State Attorney General Ken Paxton remains under investigation by the Texas Bar Association and the FBI, the former for his failed attempt to overturn the landslide electoral victory of President Joe Biden and the latter for allegedly doing favors for a wealthy donor. Despite the looming risk of disbarment and hard time in federal prison, the embattled attorney general is seeking reelection. Paxton’s strongest Republican opponent, Texas General Land Office Commissioner George P. Bush, is basing his campaign on strong borders, government accountability, and combatting human trafficking. The Republican primary winner will face off against civil rights attorney Lee Merritt this fall. Merritt’s race is centered on protecting voter rights, public education, and women’s access to reproductive care.

For decades, Tarrant County’s leadership has been male and older and whiter than the people who live here, and that gulf has only widened as the Lone Star State’s population receives new residents who are younger, more ethnically diverse, and decidedly more tolerant of others. Locally, three of the five commissioner seats are open along with the district attorney’s office and a slew of judge positions and other elected offices. While not comprehensive, we found the races below to be the most consequential for our readers and the county.

Tarrant’s county judge is the fifth voting member of the commissioners court — the elected governing body of Tarrant County. Glen Whitley has served in the role since 2007, and his tenure was marked by strict fiscally conservative leadership and largely ceremonial commissioner court meetings that left little room for dissent, let alone outbursts. Two Republicans — Southlaker Tim O’Hare and former mayor Betsy Price — are vying for the Republican ticket, and an O’Hare victory would have potentially dire consequences for Tarrant County residents who are not privy to the small, wealthy, white powerbase that O’Hare singularly serves.

In 2006, when serving as mayor of Farmers Branch, O’Hare ensnared the Dallas suburb in several years of litigation as he sought to force apartment owners to verify the citizenship status of renters. One Dallas Observer article from the time quoted O’Hare as describing Hispanics as “less than desirable” people who don’t take care of their property. O’Hare subsequently packed up and moved to Southlake, where he led an effort that has turned the tony Fort Worth suburb into a safe haven for contemporary American racism that hides behind convoluted conspiracy theories about Critical Race Theory (CRT). His successful efforts to flip Carroll school district’s board using a powerful PAC, Southlake Families, has only further emboldened right-wing extremists who are now working on his behalf to falsely portray Price as a leftist communist who performs abortions as a side gig.

One attack website funded by another, new PAC, Tarrant County Conservatives, criticizes Price for showing a semblance of humanity when she supported FWISD superintendent Kent Scribner’s decision to let transgender students choose which restroom to use at school. The website that mimics O’Hare’s press releases says Price is defending “anti-family values” even as 76% of Americans support laws that protect LGBTQ+ rights, according to a recent poll by the Public Religion Research Institute, a nonpartisan group focused on religious issues.

Under DA Sharen Wilson’s leadership, the county prosecutor’s office lost the public’s trust by engaging in politicized prosecutions and political endorsements that serve the interests of white supremacy. In the eyes of many, Wilson’s recent public endorsement of O’Hare is confirmation that the local criminal justice system places the aims of the wealthy, white, and powerful above everyone else.

“I’ve known Tim for years and can attest to his solid work ethic and commitment to servant leadership,” Wilson said. “He is honest, respectful, and the best choice for conservative fiscal management. I wholeheartedly endorse Tim for county judge.”

Wilson’s decision to not seek reelection just months after launching her reelection bid has led to speculation that the DA was forced from power due to her actions in office, although the exact event in question remains unclear.

Three political veterans are competing for the Republican nomination. Phil Sorrells served as a county criminal judge for 25 years before recently resigning to run for DA. His attempts to connect President Biden to human trafficking echo absurd QAnon conspiracies and his campaign statement that “Tarrant County is one of the nation’s most important battlegrounds in the fight against … billionaire George Soros” show that Sorrells places warped paranoia over honesty. State Rep. Matt Krause is running a well-funded effort that mimics O’Hare’s right-wing campaign. Krause is best known for launching an audit of public school libraries. His target? Books that honestly portray the lives of Black and brown youths and anyone who identifies as LGBTQ+. Molly Westfall brings 15 years of experience as a criminal court judge. Her campaign is focused on public safety and working closely with local law enforcement agencies.

On the Democratic ticket, attorneys Tiffany Burks and Albert Roberts both advocate for policies that could restore faith in the local district attorney’s office. Burks, who recently stepped down from a high-ranking position within the DA’s office, seeks justice over convictions. She has said publicly that she will work to protect all communities while avoiding over-policing when possible. Roberts says that he will work to end the war on poverty and the war on drugs if elected to office.

Our news magazine fields near-daily calls from locals frustrated with a DA’s office that ignores criminal acts committed by political allies of Wilson. A Krause or Sorrells administration would only perpetuate the DA’s history of politicizing our criminal justice system.

After nearly 40 years in office, commissioner J.D. Johnson announced that he will not seek reelection. Our office continues to receive a swell of tips and first-hand accounts of alleged misuses of government property and resources in Johnson’s Precinct 4. J.D.’s son, Jody Johnson, is running to inherit his father’s office. The Republican constable is running against Manny Ramirez, who heads the Fort Worth police department’s union.

Tarrant County’s lone female commissioner, Devan Allen, took office in 2018. She has since been the lone progressive voice on a court that has maintained agreements with ICE and supported the far-right political aims of Republican Sheriff Bill Waybourn and DA Wilson. Allen recently announced her intention to not seek reelection to the precinct that serves southeast Tarrant County.

Republican Andy Nguyen served two terms as Precinct 2 commissioner between 2010 and 2018. The sole Republican candidate who is pushing for lower taxes and improved government efficiency will run against the winner of the Democrat primary that currently pits Arlington NAACP President Alisa Simmons against Arlington City Councilmember Ruby Woolridge. Simmons narrowly lost her 2020 bid to become state rep for District 94 while Woolridge, who works as an educator and minister, is relatively new to public office.

The district clerk is the recorder and custodian of court documents. Republican Tim Wilder, a staunch supporter of O’Hare and outlandish conspiracy theories in general, first took office in 1995. Through his personal Facebook account, Wilder has publicly claimed that our news magazine is funded by liberal “donors” who visit Fort Worth for prostitutes. When asked to clarify, Wilder refused to explain his vapid public statement. Military veteran and self-described Constitutional conservative Larry Mike aims to unseat Wilder through the primary. Syed Hassan, who unsuccessfully ran for Precinct 2 commissioner in 2018, is the lone Democrat seeking the district clerk seat.

Justices of the Peace

All eight justice of the peace seats are on the ballot. Last summer, the five Republican JPs schemed with Tarrant’s three Republican commissioners to redraw the JP map (“ Clinging to Power,” Jan. 15). Their aim, according to my extensive investigative research and interviews, was to protect two Republican JP incumbencies and remove Kelicia Lyons, the Democratic opponent of JP Jason Charbonnet, ahead of this year’s election. Now that Lyons’ home has been gerrymandered out of the precinct, she’s running for Crowley school board, leaving a clear path for Charbonnet’s reelection. When elected officials use their positions to dilute the voting power of minorities, they betray the public trust and their oaths of office. Voters can send a message that such acts will not be tolerated by voting against any Republican JP on the ballot.

Democrat Mark Veasey has represented Congressional District 33 since 2012. Veasey has focused on economic development, immigration reform, and access to health care as congressman. Veasey is running against fellow Democrat Carlos Quintanilla, who garnered 5% of the popular vote when he ran against Veasey two years ago. Former Boeing employee and Republican Patrick Gillespie lists strong border control, personal liberty, and sanctity of life as his core values. Gillespie will run against fellow Republican Robert Mac Glafin, a U.S. Navy veteran and business consultant, in the primary.

Matt Krause chose to run for Tarrant County DA rather than seek reelection for the district that encompasses northeast Fort Worth. Former city councilmember Cary Moon resigned in November and will compete against former Southlake mayor Laura Hill and former pastor Nate Schatzline, who, according to his website, is just as paranoid, delusional, and evil as O’Hare.

Voters have until Fri, Feb 25, to cast ballots at early voting polling stations that can be found at VoteTexas.gov.