Home Eats Eats Clay Pot Luck
SHARE
Facebook
Twitter
During a recent dinner at Samwon Garden on Fort Worth’s South Side, a moment occurred that reinforced just how cool living in America can be: As the plates were being served, an electro-pop boy-band ballad began cooing out of the sound system. This one, though, was sung in Korean. No one at the table understood a lick of what was being said, but it didn’t matter. The cheese factor gloriously transcended the limits of language and culture. Bad pop music, like the internet, just might be bringing a far-flung world a little closer together. 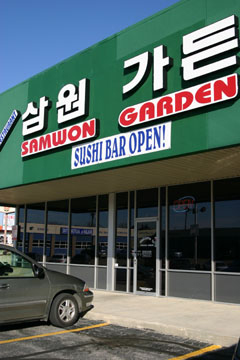 There is nothing mongrel about the grub at Samwon Garden: It’s traditional, non-risky, and very solid Korean fare. Of course, for many folks in the Fort, even standard Korean will be a culinary adventure. This restaurant, which opened about a year ago, is by most estimations the first of its ethnicity in Tarrant County. For any city that desires to have a restaurant scene of at least some significance, this is no small event. And, luckily, Samwon Garden delivers the goods, albeit with few surprises or innovations for veterans of Korean cuisine. For you newbies, by the way, understand that Korean food is spicy, though not on the immediate blowtorch level of Vietnamese or Thai — it’s more of a slow burning, oh-damn-this-is-really-hot kind of spiciness.

There is a certain ceremonial quality to a sit-down Korean meal. All you ex-tots who dug playing with tea sets will get a kick out of the dozen or so small, shiny white porcelain condiment bowls that accompany each entrée. They give a slight air of formality to otherwise informal digs. Condiment selections go from marinated (peeled, red-flecked squares of radishes and crunchy, yellow-topped bean sprouts) to pickled (sweetish yellow-green cucumber slices) to fermented (the love it-or-hate-it red chili cabbage dish known as kimchi). Those with the patience to try kimchi more than once may acquire a taste for this surprisingly hearty, savory, and spicy veggie dish with a great ginger aftertaste.

These items are meant to be consumed as desired with the main meal. A good first-time Korean entrée might be the leek and pepper pancake. The size of a small pizza, with the texture of a moist griddle cake, it has great mouth-feel as well as a nice flavor contrast between the spiky jalapeño and the leeks’ oniony richness. A small dipping dish of sweet-hot soy sauce with sesame seeds makes a fine sidecar. The spicy kimchi stew with pork and tofu was really more of a soup, even considering the thick layers of fermented cabbage. Still, the brownish red-broth had a great medley of pepper flavors. Be forewarned, though: The thick, round plugs of tofu far outnumbered the tender pork shreds.

Not so for the lamb with vegetable soup, which might more accurately be described as vegetable soup with long, tender bundles of lamb strands. We’re talking enough rich mutton to make Bo Peep’s head explode. It also contained some wonderfully soft-but-firm thin dumplings. At every other table or so, there is the stainless steel barbecue grill so folks can cook the beef and pork ribs themselves. As the initiated know, Korean barbecue is as much a social event as a meal. And for those who’ve never ventured near the delicacies described here, check your calendar: The New Year has arrived. Time to expand your horizons.