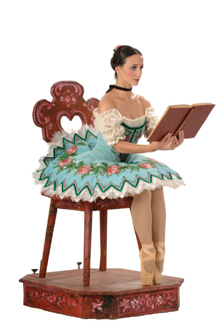 As the season opener, the story of a dollmaker and his creation that seemingly comes to life was charming with a capital “C” and sold out Saturday night and Sunday afternoon. Word of the production’s quality apparently had gotten around and sparked a late run on tickets. Piles of people swamping the ticket booth caused the curtain to be held 25 minutes on the Sunday matinee. Four years ago, Ben Stevenson presented his version of the popular ballet to open his inaugural season as artistic director. His crew then was engaging but youthful — some of the dancers were in their teens — yet the effort was head-and-shoulders above what had been seen before. Many of those dancers stayed and matured, and last weekend they showed that they have melded into an ensemble that looks and feels like a major company’s.

Of special interest was petite ballerina Leticia Oliveira, a new arrival from the Houston Ballet and a perfect partner for TBT’s exuberant, show-stopping young buck Andre Silva, who won silver in the Shanghai International Dance Competition in China last month. Both Brazilian and of similar temperament, they danced lovers Swanhilda and Franz with infectious ardor and joy. In the acrobatic department, Oliveira matched Silva spin for jump, even managing four pirouettes on point, straight up and with no leaning. Her balance is remarkable. But it’s the tender, lyric adagio work in the wedding duet that lingers in my memory. Impeccable slow-motion lifts and turns flowed seamlessly together and moved the audience to as much enthusiasm as the bravura solos.

Also new this season is British dancer Carl Coomer, another Houston Ballet alumnus, who appeared in one performance as Franz with company regular Carolyn Judson as his Swanhilda. A handsome presence and strong partner, Coomer nonetheless came up a bit short on his solo work. His body tensed rather than opening up, and the difficult sequences seemed full of effort. (His single-beat entrechats, a jump in which the dancer crosses his legs several times, were surprisingly rudimentary.) Judson, one of the early baby ballerinas, has developed into a striking dancer, with a lovely line and enviable footwork. Her bubbling personality added an extra dimension to the determined Swanhilda, who fights doggedly for her philandering Franz.

Timothy O’Keefe captured the combination of reclusive grouch and vulnerable old man that makes Dr. Coppelius, the obsessed dollmaker, so effective. The character role is sometimes seen as either boldly sinister or over-the-top comic, but the truth hides somewhere in between, as O’Keefe discovered. The corps was drilled to a fare-thee-well and received as big an ovation as the soloists during the curtain calls, something I don’t recall seeing anywhere before. Desmond Heeley’s lavish sets and costumes from years ago are still fresh and inviting, and Jack Buckhannan led the Fort Worth Symphony in the pit with style and energy. There were blips to be sure: The horn choir that begins the overture was a blur on opening night, and, on Sunday, the string solo during the principals’ duet had raggedy edges, but for the most part everything was well in hand. — Leonard Eureka

Pink: The (Web) Series
The guys behind the recent feature film Killing Down haven’t quit their day jobs but are experimenting in a new format: the web series. Earlier this year, and while also producing his fourth feature, native Arlingtonian Blake Calhoun debuted Pink: The Series, a web production starring Natalie Raitano (VIP), about a killer-for-hire who is released from prison — against her own wishes — and goes on the hunt for two men, “one, she’s trying to eliminate,” according to www.pinktheseries.com, “the other … well, she’s got something else in mind.” Webisode No. 4 has just come out, and it will be followed by a new installment every week from now through late November. Average running time is about three minutes. The entire season is 10 webisodes long, and it’s already in the can. Shot over six days in the Fort Worth-Dallas area and written by Michael Maden, Pink also stars local stage and screen actor Michael Tompkins (Living and Dying). Unlike most web series, Pink is being DELETEed and shot to lure habitual web video viewers. The character development is crammed into a few quick flashbacks, and voiceover narration propels the action along at a steady clip. A DVD of the first season also will be available early next year. — Anthony Mariani