Once the preparations were done, it took only about an hour and a half on Monday morning for Environmental Protection Agency-supervised crews to knock down the little office building at an empty Woodhaven apartment complex. 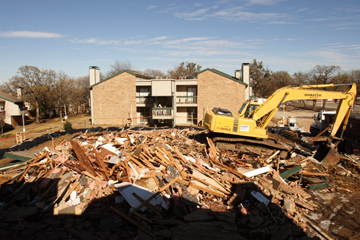 But controversy over the demolition – a test of a proposed new method for removing asbestos contamination – is likely to continue well after the debris is carted off and the site leveled. Terry Lynch just hopes that the effects will be limited to controversy – and not to increasing the toll that he has seen asbestos exact from relatives and co-workers and members of his asbestos workers’ union year after year.  As he watched preparations for the test last week, messages were hitting his e-mail inbox from yet another colleague, yet another relative suffering from the diseases that have devastated asbestos workers, their families, and many others. These include mesothelioma, a condition that waits for decades to appear and then kills – there is no cure – usually within a year.

Lynch, representing his union of insulation and asbestos workers, came to Fort Worth along with members of Trial Lawyers for Public Justice in the last few weeks to try to rally opposition to the test of the new asbestos removal method – the EPA’s first test in a densely populated urban area. They didn’t find many allies in Woodhaven or on the city council, and they didn’t manage to stop the demolition. But experts who served on an EPA peer review panel have raised issues about the controversial “alternate” process – a method that caused major controversy in Fort Worth when the EPA wanted to try an earlier version of it a few years ago and one that is actually the brainchild of city environmental management director Brian Boerner. “I was the one who asked the question” originally of whether there was a cheaper, faster – but still safe – method of removing asbestos, Boerner said. “At that point we had more derelict buildings that needed to be torn down than we could shake a stick at but a very small pot of money” with which to pay for demolitions. And as the buildings sat, he said, they became “havens for crime and drugs … cancer cells that could affect the neighborhoods.” Because asbestos removal greatly increases the cost of such demolitions, he started looking for a less expensive method than the traditional labor-intensive method of workers in protective clothing and air-trapping enclosures removing tiles, insulation, and other asbestos-carrying materials.

So he spent a couple of years reading up on asbestos removal science, he said, and then went to the EPA with a proposal for the “Fort Worth method” – in which buildings would be hosed down with water during demolition, to clean the air of dangerous particles. Local outcry – aided by the trial lawyers and the union – spiked a test of that method on the derelict Cowtown Inn in 2004. But the EPA went back to the drawing board, developed a method of adding firefighters’ chemical foam to the water stream to improve the asbestos-trapping action, tested it twice – at a remote area of a military base and then in an industrial area – and brought it to Fort Worth for a third round. EPA officials say the earlier tests showed that the method is at least as effective as the traditional asbestos removal protocol and therefore safe to experiment with in the densely developed Woodhaven neighborhood. And they said the Oak Hollow demolition went well, with no emissions visible to observers. Data from monitoring devices around the site won’t be available for another 45 to 60 days, and a draft report on the test isn’t expected to be released until next May.

“We have factored every precaution and safeguard we can think of into protecting anybody who is nearby,” said Roger Wilmoth, chief of the industrial branch of the EPA’s national risk management research arm on Monday, after the demolition was complete. “We’re right here, too – we’re walking all around the area 25 feet away and we’re not worried,” he said. “We have great confidence that it is going to prove to be a very safe situation.” But Lynch and others are not convinced; they fear that the new method, if finally approved by the EPA, could be used across the country by property owners and contractors who would take shortcuts. “You’re going to have contractors cutting corners, and a whole ‘nother generation of sick people – unsuspecting sick people, because you can’t taste or smell or feel asbestos, and it doesn’t manifest itself for 25 or 30 years,” Lynch said. Asbestos’ most serious effects don’t occur normally from a single exposure, but if a number of buildings were being taken down using less-than-exacting precautions over a period of time, he said, the effects could be serious.

Most nearby residents apparently aren’t worried, especially if the test helps get derelict buildings in their neighborhood torn down more quickly. Norman Bermes, who has crossed swords with the city on other issues, said that the people he’s talked to “see no problem with either method” – traditional or experimental – of removing asbestos, as long as the buildings come down. “We don’t see that they’re going to endanger anyone, and they’re certainly making it a gift to the city to remove that,” he said. Although city officials tend to refer to the union and trial lawyers as though they were the “outside agitators” at a ’60s protest, those groups aren’t the only ones who think the EPA is going too fast down a questionable track with the new method.

Ron Dokell, president of a demolition consulting firm in Houston, was on the peer review committee that studied the EPA’s reports on earlier tests at Fort Chaffee, Ark., on the alternate method. “Most of us on the committee were not too impressed with the methodology,” he said. Although the EPA says the new process could be substantially cheaper than the traditional method, Dokell said that won’t be true in most cases and that the process can’t be used in most urban settings, because there will not be enough clearance from nearby buildings. “One problem is, all the water used has to be trench-collected and disposed of,” he said. “The costs of that are astronomical.” Fredy Polanco, also of Houston, heads a company that does training and consulting on asbestos removal and was also on the committee. The new method appears to be on a par with the old one in limiting the release of asbestos, he said, but “it won’t be cheaper for buildings bigger than about 5,000 square feet.” In a real-world situation, “I don’t think contractors are going to follow all those rules” for trenching, collecting, and filtering water and using the chemical foam, he said.

Adele Cardenas Malott, the asbestos program manager in the EPA’s Region 6, suggested that some critics might have been influenced by the idea that the new method would take asbestos removal work away from their companies. Polanco and Dokell both rejected that idea – both said the EPA policies won’t affect them, because they don’t do the actual removal work. Cardenas Malott said that the peer review panel raised concerns about the agency moving too fast because the EPA has already proposed a rule change that could allow the new method – even though testing is incomplete. That was done, she said, because the rulemaking process takes years.

Lynch said that concerns over the alternate method worried his union enough to make members set aside their differences with the trial lawyers – differences over legislation affecting asbestos damages cases, which have bankrupted companies and weighed down court dockets . He talked about the terrible price that workers and their families have paid and are still paying for what the construction industry didn’t know – and then for years didn’t tell – about the dangers of asbestos. In the 1950s and ’60s, he said, when one American in 2 million could expect to contract mesothelioma, the rate among asbestos workers was 1 in 10. The disease attacks the linings of the lungs, heart, and other organs. And “there is absolutely no cure,” Lynch said. “It’s a hideous death.”

Lung cancer and lesser but still potentially serious problems, including asbestosis, also result from exposure. Lynch himself is a third-generation asbestos worker. “My dad died of lung cancer,” he said. Afterward, an autopsy showed that his dad was “loaded with asbestosis. It was a big factor in his death.” And it’s not only asbestos workers themselves who are affected. “The daughter who was bounced on her dad’s knee – 40 years later she’s coming down with mesothelioma,” Lynch said. “That’s why we’re involved” with legislation to help sufferers get financial help, and with the debate over removal methods. As he and colleagues bird-dogged the demolition site in Woodhaven last week, the calls and e-mails from sufferers rolled in. “Last night I had two e-mails” from people with mesothelioma, he said. One was from a 55-year-old man – a “literate guy who now can’t put a sentence together” and can’t walk to the bathroom by himself. The other was from a cousin he’d never known well – but who now has been diagnosed as the second generation of her family to have mesothelioma. “There is no acceptable level of asbestos,” Lynch said. “That’s why they put all these laws into place” requiring the traditional, labor-intensive method of asbestos removal. “We don’t have a dog in this fight,” he said, meaning that members of his union don’t participate in asbestos demolition jobs. The new method is being proposed “for only one reason – because it’s supposed to be cheaper,” Lynch said. “But what is a life worth? We’ve seen the devastation asbestos can cause.”

Boerner said that the fact that EPA officials believe the Fort Worth demolition test went well doesn’t mean any changes will be made in asbestos removal here, unless the official rule is changed down the road. But if the EPA needs another test site for a continuation of the research, he said, Fort Worth might volunteer again. “If they need another scenario and we have a building that meets their criteria, I’m not saying we wouldn’t partner with them again,” he said.

You can reach Gayle Reaves at gayle.reaves@fwweekly.com.