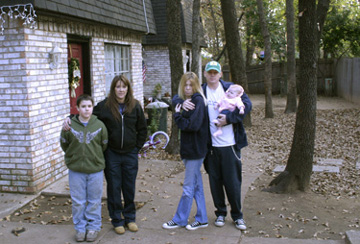 But the notes that a group of families on Landmark Court in Arlington received on Dec. 10 were filled with anything but: They were notices that their new landlord had decided to end their month-to-months leases. Some of the tenants in the eight-unit complex were given 30 days to leave, others 60. The notices came as a shock for a couple of reasons. First, the new landlord had written to all of them just 10 days earlier, assuring everyone that “your current lease and payment terms will remain the same.” And secondly, the new landlord is Mission Arlington/Mission Metroplex, one of the most respected Christian organizations in the state.

“To get a letter ordering you to vacate the property in 30 days at Christmastime, and from a Christian mission, well it just doesn’t seem right,” said Toby Edwards, a drummer with the local rock band Johnny Knuckles, who’s lived in the small apartment complex at 2211 Landmark Ct. for five years. “But to get it just 10 days after getting a notice assuring us that everything was fine was just a complete shock. Where are we supposed to go? How are we supposed to come up with the money for a U-Haul and for deposits on a new apartment and electricity and everything at Christmastime?” Edwards, who lives in the modest white-brick complex with his wife and their three-month-old baby, isn’t the only tenant who was shocked to get the second letter. Donna Maher is a four-year resident who is disabled, living on a limited, fixed income. “If I knew my housing situation was going to change, I would have had to arrange it a long time ago,” she said. “This is just a slap in the face, really.”

Tillie Burgin says it’s all going to be OK. Burgin is founder and executive director of the nondenominational Mission Arlington/Mission Metroplex, long one of the great resources for Arlington families who find themselves in a tough spot. “What we’ve done,” she told Fort Worth Weekly, “is we purchased the apartments, which we are renovating and will use to provide housing for missionaries working with our mission. We’ve visited with the families and are trying to work with them. We’re finding them other places. We want them happy. And we will not kick anyone onto the street. That’s not how we do things. That’s not how I do things.”

Her track record reflects a life dedicated to easing misery, not creating it. After serving as a missionary in Korea for 10 years, Burgin returned to her Arlington roots and founded Mission Arlington in 1986. The nonprofit agency’s work reaches into almost every area of the community’s social needs. Along with church services, tent revivals, and Bible study programs, the mission offers citizenship and English classes, a GED program, after-school programs, summer camps, childcare assistance, and youth sports leagues. The group also provides school supplies to needy families, bicycles and donated cars to those without transportation, food, clothing, financial help, free medical and dental clinics, counseling, and a host of other services. Tens of thousands of gifts are given free each year through their Christmas store, and more than 10,000 people each year receive help at Thanksgiving. And they do it all with private donations.

For providing so much for so many, Burgin, now 71, and the Arlington mission have received countless awards and honors. Congress recognized the organization for its service to victims of Hurricane Katrina. Burgin herself is in Texas Women’s Hall of Fame, and Arlington once declared an official Tillie Burgin Day. The Weekly named Mission Arlington as Best Volunteer Organization in Tarrant County in 2006. Despite that record, Burgin’s assurances are ringing hollow with families in the little unnamed complex on Landmark Court. Of tenants in the six occupied units, the three who spoke with the Weekly all said that, except for one offer of moving help, no one has offered them assistance or suggested there is any leeway in the departure deadlines they’ve been given.

Maher, whose apartment is a Section 8 housing unit – with part of her rent paid under a federal program – said that the first she knew that the complex was being sold was when three women, one of whom she later recognized as Burgin, visited the apartments about two months ago. “One of them told us they were going to buy the property, and that was about it,” Maher said. “They came by again after that and told me they were going to be fixing up the empty apartments for some missionaries, but they didn’t say we were going to have to move.” She added that if Burgin told the Weekly that the residents were happy to move “or that they offered to help us, that’s just not true. They haven’t offered anything. But at least I got a 60-day notice, not like some of the others with 30 days.”

Another tenant, who didn’t want her name used but who, like Toby Edwards, pays full rent, agreed that the letters came as a surprise. “We’ve got three kids, and we were beginning to look for a bigger place anyway,” she said on a recent blustery day. “And from the sound of the first letter on Nov. 30, everything was just going to stay the same as it’s been. But now with this new letter telling us to be out by Jan. 10, well, the timing is awful. I mean it sort of ruins Christmas for us, because now we have to move a couple of months early and put a new apartment deposit down right away. And that was money we were going to use for Christmas and for a new living room set.”

She acknowledged that the new building manager told her to ask him if she needed any help moving. “But we’re just moving across the street. Not like some of the others who don’t have any idea where they’re going to go.” And no help was offered with new deposits or other costs, she said. While she feels lucky to be able to stay on Landmark Court, two of her fellow tenants said they hate the prospect of leaving. Landmark Court runs into Cherry Lane just off Pioneer Parkway, making kind of a horseshoe-shaped semi-private area. On the corner of Cherry and South Fielder sits Mission Arlington’s Grace Church; at the rear is a job placement assistance center. There are more than a dozen small apartment buildings tucked onto the quiet tree-lined streets behind the church. The tenants say there is very little crime and little traffic beyond their own vehicles and that the little area feels like a community. “This is a beautiful little neighborhood,” said Maher. “It’s quiet, it’s convenient, and we’re all neighbors here. And now we’ve got to start over and try to find a place that we can afford to move into that is in a part of town we can actually live in safely.” “To be honest, we were lied to,” Edwards said. “Mission Arlington might do a great deal of good for a great number of people – and they do – but they lied to us. They said we’d be fine here and then 10 days later tell us to go. I don’t think that’s a very Christian thing to do at all.”

Told of the tenants’ comments, Burgin said it’s just a misunderstanding. “We’re already putting furniture away for the family that’s moving across the street. And we’ll be giving them a truck and driver and men to move them. And we will do that for everyone there. If we didn’t do that, God wouldn’t be happy.” She added that she would see that everyone gets their current apartment deposits back before they move so that they can use the money for their new places. “And no one will be forced to move until they have a new place they’re happy with. And we’ll take care of anything else they need that’s connected with the move as well,” she said. “If we did anything that would make those people’s lives more difficult, well, that would just go against what we are. “And if you don’t think that’s true,” she added, “we’ll just have to see how it goes when it’s time. That will be the proof in the pudding.”

Edwards, however, said that, as late as Dec. 11, “the building manager, Randy Lawrence, told me on the telephone that I was to ‘make sure I was out by the 10th of January.’ So, if Tillie told you different, well, then you’re the only one she told. And if she told you she’d send a truck and men to move us, that would be a help. “And if she’s serious that no one has to move until they find a place they’re happy with, well, for me, I won’t be able to afford to move until March – so I want to hold her to that. But I guess I’ll just believe it when I see it.”