Ginny Mac is a throwback of sorts. The slight, shy twentysomething Fort Worthian lives somewhere between her laptop and the vintage Western wear she finds at secondhand stores. 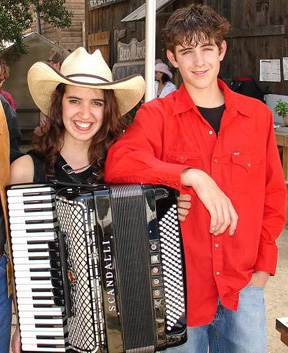 Her original compositions draw on Western swing, country, and big-band music, but the singer, pianist, and accordionist prides herself on her ability to modernize hip sounds of yesteryear rather than merely recreating them. Now, with her degree in business from Texas Christian University in hand, Mac plans to throw herself wholeheartedly into her music career, even though she hasn’t been exactly neglecting it. She already has put out two albums, Sweet Sentimental Dream and 2005’s Wishing River, and, for the past couple of years, she has been playing weekly gigs at Bella Italia West on the West Side, in addition to touring the region’s dance halls and performing at the annual Cowboy Poetry Gathering, a weeklong celebration of the Old West, with chuckwagon meals and cultural exhibits, that takes place in Elko, Nev.

In fact, she has just returned from the gathering’s 2007 version. (Fort Worthian C&W artist and storyteller Red Steagall also performed.) Aside from dealing with non-stop snow and a case of the flu, Mac said she had another successful outing, immersing herself further in the culture she loves so much and performing in front of decent-sized crowds. “Playing music makes me feel the most natural,” she said. “I settle in and become myself. It’s a surprise to some people. They’d never guess it when they see me on stage.”

Mac’s music fits this alternate-universe scenario neatly. She spends most of her time onstage with her accordion and the rest with her piano. Accordion is the first instrument she ever learned, starting with lessons when she was seven. She got hooked on it after seeing a man play it at an elementary-school assembly. A few years of formal training later and Mac had developed a good understanding not just of the accordion but of how music and most of its other machines work on a fundamental level. Although she writes on piano and guitar, claiming they are more “rhythmic,” there’s a special place in her heart for the squeezebox. “It’s just very close to me,” she said. “It’s an instrument I can really feel. It’s like an appendage.”

Four years ago, she taught her younger brother, Glenn McLaughlin, how to play guitar – and he quickly became her sidekick. Now 19, McLaughlin is studying jazz at the University of North Texas, one of the most lauded jazz programs in the country. “My brother is the greatest thing in my life,” she said. “We get along very well. It’s easy to play music with him because he’s a great leader, follower, and listener.” The pair often performs as a duo, but on occasion she will add a bassist, fiddle player, steel guitarist, or anyone else capable of fleshing out her tunes. Mac’s formal education – her degree is in finance and entrepreneurial management – is helping her navigate The Biz. Though a full-time job is out of the question, at some point she would like to put her degree to use, perhaps as a music-industry consultant.

She plans on spending some time in Nashville this year and is writing songs for a new album. There’s no rush, however. She wants to reflect on her growing maturity as a songwriter and as a person. What she’s written so far, she said, is “more holistic – it’s more about life than heartbreak. “I have a long way to go,” she continued. “But I’m looking forward to always getting better.”