Our country’s chaotic political climate has given birth to all sorts of monsters at the movie theater – look no further than the Joker’s grotesque visage for proof. 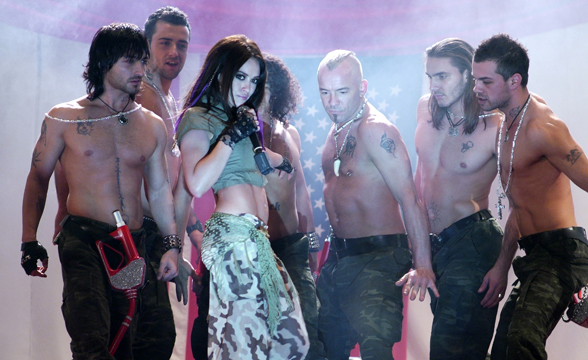 Two other films try to grapple with America’s position and responsibilities in the world, and while they both fall short, one of these failures is definitely more interesting than the other. When there’s so much in politics to be angry about, Swing Vote offers woolly optimism, though that’s not why it’s uncool. Kevin Costner plays Earnest “Bud” Johnson, a hard-drinking New Mexico redneck living in a trailer with his 11-year-old daughter Molly (Madeline Carroll), who talks like a particularly humorless poli-sci major – I think this is supposed to be charming. She wants him to vote on Election Day, but when he’s laid off that morning from his job packing eggs, he decides to get wasted instead. In a snit, Molly tries to vote in his place, but a power failure keeps the vote from being counted. Wouldn’t you know it? The electoral race is in a dead heat, as is New Mexico’s popular vote, and Bud gets to recast “his” ballot. He has 10 days to break the tie and choose our nation’s president, and he doesn’t even know who’s running.

If this sounds like the premise of a toothless and inoffensive comedy, don’t be fooled. This movie is much worse. The funniest bits here show the Republican incumbent (Kelsey Grammer) and the Democratic challenger (Dennis Hopper) abandoning their parties’ principles to appeal to this one person’s vote. The Democrat announces he’ll outlaw abortion, while the Republican promises to legalize gay marriage. These, however, are stray bits of satire floating in a sea of seriousness. The movie’s two-hour length is filled with ruminations on the Founding Fathers and the social contract.

Despite their flip-flopping, the two candidates get in touch with their sense of honor in the end, and their craven campaign managers (Stanley Tucci and Nathan Lane) take the fall as representatives of everything that’s wrong with American politics. The film ends with a tedious speech in which Bud finally realizes his obligations to society, a scene that brings out Costner’s all-too-familiar worst instincts as an actor. A movie that lectures you on your civic duty is no one’s idea of a good time.

If Swing Vote needs more satire, War, Inc. has too much of it, or at least too much bad satire. The setting is a fictitious Middle Eastern country called Turaqistan that is occupied not by the U.S. military but the private security troops of Tamerlane, an American firm named after a conquering Mongol emperor and run by a Dick Cheney-like former U.S. Vice President (Dan Aykroyd) who treats the invasion as a profit venture. Tamerlane’s troops put up Popeye’s Chicken outlets when they’re not fighting terrorists, and the tanks rolling through the streets are plastered with corporate logos. All this unfunny business is sadly typical of the staggeringly obvious points that the filmmakers are trying to make about power, globalization, and American hubris. Into this war-torn country steps Brand Hauser (John Cusack), a contract killer who swills hot sauce to deal with his job stress. Posing as a trade show producer, he’s under Tamerlane’s orders to assassinate a local energy mogul who wants to keep Turaqistan’s natural gas reserves away from the Americans.

It’s a shame the satire is sledgehammer-subtle, because wrapped inside it is a workable drama about Hauser’s relationships with two women. One’s a reporter (Marisa Tomei) who’s too smart and inquisitive to buy into the song-and-dance Tamerlane gives her colleagues and tries to milk Hauser for information. The other is Yonica Babyyeah (Hilary Duff), a tarty Turaqi pop music starlet who’s at the trade show to perform her songs and marry the energy mogul’s nephew. These characters are layered in ways that the rest of the movie isn’t, and they ring interesting chords off the burned-out Hauser. Tomei is a welcome low-key presence amid the general garishness, and the patter between her and Cusack runs like a smooth engine.

Meanwhile, Duff is occasionally amateurish as you’d expect, yet she gives easily the best performance of her career as an angry, lost little girl making a public spectacle of her sexuality because it’s the only way anyone will pay attention to her. (Check out her performance of a song titled “I Want to Blow You Up,” which has a long musical pause between the words “you” and “up.”) Had the filmmakers given these characters a more straight-up treatment, War, Inc. would have been a stronger film. As it is, the last time we see these characters, they’re fleeing Turaqistan together in a plane pursued by a heat-seeking missile. We can only wish them well and hope they find their way into a better movie.