It may not be explicitly part of the job description, but part of a bartender’s duties includes lending an ear to every stereotypical and vocal sad-sack. Which is fine for the most part, for the following reason: Whenever you point and laugh at the Dude Who Drinks Alone or the Girl Who Cries at the Bar, you’re acting as if you’ve never been drunk, sad, and loquacious; or, worse, drunk, sad, loquacious, and monopolizing the jukebox with music that bums out everybody else. In other words, everybody who gets drunk eventually gets the blues, and it’s the bartender’s job to murmur and nod at least until the sob-story starts to creep out other customers. 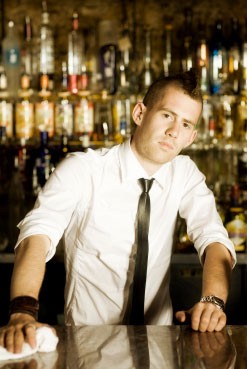 So bartenders listen to everyone, but who listens to bartenders? The answer, of course, is other bartenders. And, boy, can we raise a great hue and cry over stuff. As soon as the last lingerer is ushered out the door, the gripes fly faster than a coked-up pterodactyl. “Did you see what that dickhead left on his $80 tab? Two fucking dollars!” “Yeah, well, did you see that dude who snapped his fingers at me? That’s the last time he gets a drink in this bar!” And on and on and on. If you don’t believe me, date a drink-slinger for a couple months. The plots get predictable really fast.

Of course, I’m just as guilty, and I’ve even done my complaining in print. But here’s the thing: Mopping up puke and tears might be annoying, but it usually makes for a good story. I think that as professionals, our sanctimony stems from expecting the public to behave the same way we do when we’re in a bar and off the clock. Generally speaking, bartenders (and waiters, for that matter) tend to adhere tenaciously to the golden rule when dealing with our own, and when rest of the world is less than golden, we really get our noses out of joint. I think that’s silly — a bartender who gets furious over a shitty tip is like a day-care worker going postal over a runny nose. In other words, it’s all part of the gig.

What angry bartenders (myself included) typically forget are the parts that make the gig worthwhile. For one thing, it’s a pretty easy job that pays (occasionally) pretty well. Daytime professionals such as desk jockeys and astronauts might have regular schedules and extraneous things like benefits and vacation time, but they also work, like, 50 hours a week.

Comparatively, bartenders often live the life o’ Riley. I’d say the top reason why we bartenders do what we do is for the money and convenience, but there’s another reason –– and it’s a close second. I don’t know about the rest of my peers, but I like bartending because of the regulars. You know who you are, and it’s nice to see you. We may have to breathe your cigarette smoke and hear your long stories, but the truth is, when you’re not there, we miss you. If a regular skips a couple weeks (or nights), it’s not like we call the police, but we start to wonder what’s been going on. If the rapport between you and me is good enough, I might even ask where and how you’ve been. And sometimes I’m genuinely concerned. I might tell you that you should quit smoking, but it’s only because I care. Well, that’s not entirely true — I’d also prefer not to smell like your mouth, but you know what I mean. We’ll put up with your tics and habits, but only because you put up with ours.

So I love bartending. When I go to the “office,” I’m usually happy to be there. My grin might become a grimace by last call, but when the drunks are gone and the security alarm’s set, I look forward to doing it all over again. Feel free to swing by anytime and tell me about your bad day. –– Steve Steward