For the sake of some jokes, I spent half the morning trying to think up reasons why I don’t like St. Patrick’s Day or, as I like to call it, 24 to 96 Hours of Blarney Baloney. Truth is, I couldn’t think of any good ones, so I guess I’ll have to go on record and say that I don’t mind St. Patrick’s Day. In spite of my reluctant admission, however, I still think it’s a pretty pointless holiday, unless you’re either an elementary school teacher who likes class parties or a drunk. 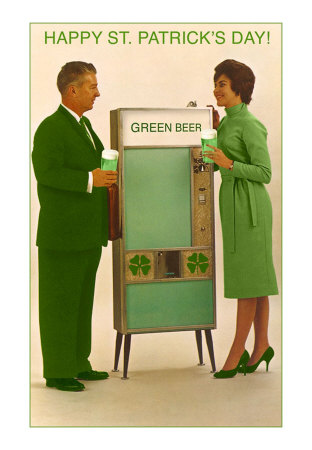 Think about it. Unless you’re calling in “sick,” it’s not like anyone gets the day off for Blarney Baloney. I guess if you’re young, Irish, and live in Boston, you might look forward all year to a day where you can get super drunk with your buddies, yell along to Dropkick Murphys songs, and maybe get in a fight. Of course, if you fit in that group, I’m probably just describing any given Friday.

Those sentiments have probably set my Irish forebears spinning in their graves. I’ll try to be fair. I understand that St. Patrick’s Day celebrates Irish heritage and Irish folks’ place in American history. I also understand that the reason for any given holiday is nearly always diluted by someone’s piggybacking a sale onto the celebration. You obviously get this with Christmas, Easter, President’s Day, the Fourth of July, Memorial Day, Labor Day, and, of course, Valentine’s Day — and Blarney Baloney is no different. Specials (on green beer, natch) abound. But in a way, this holiday denigration is worse on St. Paddy’s. While March 17 is officially about celebrating the Emerald Isle’s sons and daughters, it’s really about drinking and is advertised shamelessly as such –– the Irish cultural pretext is barely even mentioned, unless I’m mistaken and Ireland really was settled and ruled by young, unrepentant drunks with disposable income. Jesus’ birthday might get overshadowed by crowded malls, but at least he’s not directly associated with debauchery.

But then again, what do I care? I am a little bit Irish, and I do enjoy a little bit of drink, and by little bit, I mean make mine a double and hold the ice. So far be it from me to be a cranky killjoy when it comes to getting people into bars. I just think it’s funny that people need a holiday on which to blame a random weekday morning hangover. And since we’re on the subject, I feel the same way about Mardi Gras and Cinco De Mayo, two occasions that are important to a couple of American subgroups but are largely used by the general population as excuses to drink ’til oblivion.

Of course, I do appreciate crowded clubs and people having a good time, and if a second-tier holiday is what it takes to get bodies into bars, then, hell, let’s have more of them. We can name them after a saint or a president or a revered television personality, but in spirit if not name, they’ll all be Day to Get Drunk to me. Sláinte! –– Steve Steward

Just in time for St. Paddy’s Day, the West 7th Street-corridor bar formerly known as the Shamrock Pub has reopened under a slightly different name, the Shamrock Tavern. The Pub once sat near the corner of West 7th and Carroll Street but closed and was replaced by Poag Mahone’s, an Irish-themed bar. Poag’s recently closed and reopened about a block away. Shamrock Tavern is now in that West 7th/Carroll spot, its former location, as Shamrock Pub. Conclusion: West 7th and Carroll should be a destination on your party itinerary on March 17 and, really, any time. Within walking distance of one another are several exemplary and independently owned bars, including Poag’s, the Shamrock, Lola’s Saloon-Sixth, 7th Haven, and The Pour House. How they stack up against all of the Dallas-owned bars sprouting up in the nearby West 7th development will be a Darwinian experiment of the highest order. –– Anthony Mariani