Jesus BBQ is a perfect metaphor for what’s going on in the area around South Main Street and Rosedale Avenue. The little diner is nestled between a giant factory and what appears to be a halfway house but is also about a block away from Rahr & Sons Brewing Company’s headquarters and Eagle Audio Recording Studio. The revitalization going on all over the Near South Side is happening here — but maybe at a little slower pace. In short, you should still leave your diamond-encrusted track suit at home when dining at Jesus, but you can probably leave the sidearm, too.

The building itself is old white brick with green trim. The windows are barred and covered in menu descriptions written in chalk. Jesus BBQ is the kind of place where hipsters who have watched too many episodes of Anthony Bourdain: No Reservations dare themselves to go. 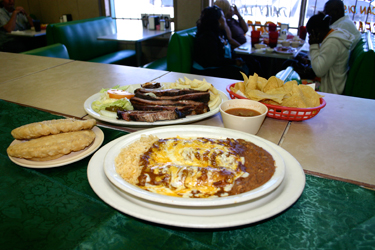 The décor is dive-chic, with authenticity oozing out of every molecule of the green padded booths. The unapologetically old-school aspects share space with some modern flourishes, however, like the eclectic jukebox featuring everything from Johnny Cash to The Toadies. The tile on the wall and floors seems relatively new, evidence that the owners still care and that the dive-y charm is intentional. In other words, they know what they have. The restaurant has been around since 1970 and is still family-owned.

The menu is wild, offering a variety of breakfast items, barbecue, sandwiches, salads, and about two dozen Mexican dishes. On a recent Monday afternoon, the dining room of about a dozen tables was about half full. The service was prompt and friendly.

The chips and salsa served before lunch were a little underwhelming. The red salsa was too soupy to stick to the greasy chips, although the spice level was appropriate: hot but not scorching. The main courses, though, more than made up for the starter’s shortcomings.

Jesus BBQ’s chicken-fried steak is legendary. It’s the fruit of the gods to many Fort Worth natives, who grew up on it. The steak itself was not the biggest cut of meat, but it was perfectly sized for lunch. The breading was light, not greasy, and didn’t overwhelm the tender beef. (There’s nothing worse than a chicken-fried steak that looks huge but is all batter.) The steak arrived with creamy house-made mashed potatoes and slathered in cream gravy. Taking up the rest of the very crowded plate: steamed broccoli and carrots, a small salad of iceberg lettuce, tomato slice, and ranch dressing. Both the vegetable medley and salad were uninspiring by themselves but somehow managed to perfectly complement the CFS and mash.

The brisket, recommended by the server, was lean, tender, and a little smoky. The sauce was decent but could have used a little more tanginess. The meat came with the same sides as the chicken-fried steak plus hot rolls.

The prices at Jesus BBQ range from $2.30 for a grilled cheese to $16.25 for the “choice Texas sirloin steak,” and there’s everything in between. The portions are neither enormous nor small, and the house-made fried pies, scrumptious and only $1.50 apiece, are hard to pass up.

Everything about Jesus BBQ is pure comfort, capturing the authenticity and sincerity of Grandmother’s kitchen while unknowingly flirting with hipsterdom –– but there’s not an ounce of pretension in the place or the food. The fare is simply hearty, fresh, and flavorful, decently priced, and served with a smile. In a rapidly developing area, the folks at Jesus BBQ have a foot in the past but are talented and passionate enough to forge a bright future for themselves.