History geeks and public radio fans rejoice! Sarah Vowell comes to UNT this evening. The author with a flair for bringing obscure subjects to humorous life will read from Unfamiliar Fishes, her new book about the influence of American missionaries in Hawaii in the 19th century. She appears at 8pm at UNT University Union, 1155 Union Cir, Denton. Tickets are $10-20. Call 940-565-3805. 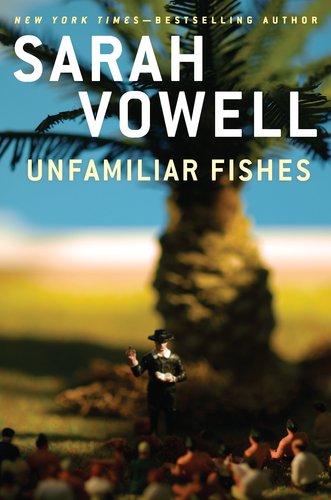 Not only is Puss in Boots starring in his own movie right now, he also makes a cameo appearance in Shrek the Musical. The stage show, with a new book by David Lindsay-Abaire and new songs by Jeanine Tesori, received mostly positive reviews when it premiered on Broadway in 2008, and now it’s here. The show runs thru Sun at Bass Performance Hall, 555 Commerce St, FW. Tickets are $22-66. Call 817-212-4280.

Piranha Bear, an occasional traveling art exhibit/party, takes its show on the road to Keller tonight. In addition to crafts and fine art by local artists, there’ll be booze and finger-foods, plus a solo performance by singer-songwriter Sam Anderson (Quaker City Night Hawks, EPIC RUINS). The show is at 7pm at Keller Town Hall, 1100 Bear Creek Pkwy, Keller. Admission is free.

DVA Productions has put on stage shows in Fort Worth before, but now they’ve fully joined the ranks of our theater troupes with a full season of shows and a new home at Pantagleize Theatre. DVA’s first production is Billie’s Blues, a musical revue tracing the career of Billie Holiday. The show runs Nov 11-20 at 1115 S Main St, FW. Tickets are $15. Call 817-313-3052.

Two dancers, two musicians, two visual artists, and two writers combine to give us Café des Artistes, a multimedia production by Sundown Collaborative Theatre that aims to give insight into the creative process of these different disciplines and how it can change relationships. The show runs Nov 10-20 at Green Space Arts Collective, 529 Malone St, Denton. Tickets are $8-10. Call 214-729-0313.

Since the NBA has gone AWOL, hardwood fans can turn to TCU basketball for their hoops fix. Both the men’s and women’s teams are in action tonight, with the Lady Frogs enjoying their home opener against UT-San Antonio while the men take on Austin College. The women tip off at 6pm, the men at 8pm, both at Daniel-Meyer Coliseum, 2900 Stadium Dr, FW. Tickets are $4-15. Call 817-257-7967.

Remember when Owen Wilson traveled back to 1920s Paris in Midnight in Paris? You can feel like that again when Cho-Liang Lin visits Bass Hall. The Taiwanese violinist (no relation to the Night & Day editor) will play music by Debussy, Stravinsky, Poulenc, and Ravel, accompanied by pianist Jon Kimura Parker. The concert is at 7:30pm at Bass Performance Hall, 555 Commerce St, FW. Tickets are $15-90. Call 800-462-7979.