A principal dancer with Texas Ballet Theater, Judson took advantage of two huge opportunities to shine last season: as Princess Aurora in Sleeping Beauty and as the title character in artistic director Ben Stevenson’s The Merry Widow. Capturing the individual qualities of each woman, and showing no technical problems with either role, Judson gave two striking performances.

Coomer, another TBT principal, has not always excelled in character development. His performance of Count Danilo, the favored suitor in The Merry Widow, however, opened up dramatically as well as technically, and he showed how compelling he can be when everything comes together.

Critic’s choice: Video Games Live at Concerts in the Garden

Go ahead and debate the brow level and artistic merits of video games. We’ll be over here humming the Legend of Zelda theme, stuck in our heads since June 19, when the Fort Worth Symphony Orchestra performed that tune and other classic themes (Castlevania, Sonic the Hedgehog, Tetris, and plenty of others) in front of clever visuals. That Grand Theft Auto car crashing through Frogger’s logs was a huge crowd-pleaser. It might have been a muggy night, but that didn’t stop video game fans from dressing up as their favorite characters and digging the tunes. Kudos to Video Games Live honcho Tommy Tallarico and guest conductor Emmanuel Fratianni for melding high culture and pop culture in a way that was totally fun for everyone.

What were the odds that the Fort Worth Museum of Science and History would take this category? Pretty high, actually, given that they snagged the Smithsonian Institution’s tribute to this cartoon animator whose work was as formidable and influential as that of any 20th-century American painter or sculptor. In detailing the evolution of Bugs Bunny, the craftsmanship that went into his short films, and the exquisite comic timing that Jones displayed, this show was as exhilarating and enlightening as any art museum could hope for.

Readers’ choice: (tie) Botticelli to Braque: Masterpieces from the National Galleries of Scotland and The Collection of Nancy Lee and Perry R. Bass, Kimbell Art Museum

A great advertisement for the cultural wonders across the Atlantic, this show brought in a slew of big names like Picasso, Monet, Vermeer, Titian, and Matisse. Still, the most interesting works were the ones by lesser-known painters like John Singer Sargent’s sumptuous and enchanting “Lady Agnew of Lochnaw” and Frederic Church’s “Niagara Falls, from the American Side.” These artistic treasures lit up the Kimbell’s Piano Pavilion this past summer.

1.) To photorealist Devon Nowlin, replicating pictures isn’t enough. There’s got to be some edginess, something that takes a painting beyond the frame, and with her subtle yet powerful solo show at Artspace 111, Casual Luxury Complex, Nowlin proved that there’s more to photorealism than realistic paintings of photos. On one canvas, she rendered a giant sculpture wrapped in translucent plastic, devoting attention normally reserved for, say, people’s faces or a landscape’s contours to otherwise peripheral details: folds and creases, shadows, glints of light. On other canvases, she offered houseplants backdropped by geometric patterns. And on yet others, numerous odes to “Frank,” a black-and-white-checkered puppy of polymer clay which she made and which was pilfered from her opening (and eventually returned). As enthralling as Casual Luxury Complex was, something tells us that this TCU alum is just getting warmed up. 2.) Talk about creepy. Testament, photographer Jennifer B. Thoreson’s solo show at Gallery 76102, would have stunned David Lynch. The heads of several family members buried beneath a mountainous pile of white fluff at a kitchen table, a man draped with flesh-colored teardrop sacks on his back, a couple lying in bed with their heads consumed by a throbbing mass of brown tendrils –– you can read whatever you want into the UTA grad’s harrowing tableaux, but for their sheer visual power, there wasn’t much that came close this past year. 3.) Congrats to William and Pam Campbell, the husband-and-wife team who celebrated their 40th year in the art business this past year. William Campbell Contemporary Art’s anniversary show was full of all of the big names that have kept the gallery interesting and edgy since ’74, including Stephen Daly, Michel Demanche, Julie Lazarus, Mark Smith, Richard Thompson, Kevin Tolman, Cecil Touchon, and Judy Youngblood. Congrats again, y’all. 4.) A retrospective of the last 30 years of Nancy Lamb’s illustrious career, The Gang’s All Here at Artspace 111 was a tour de force of sumptuous colors and juicy yet precise lines, the titular “gang” being all of the revelers Lamb has captured in medias partay over the years. 5.) The spirit of Día de los Muertos pulsates throughout this Chilean/German mixed-media artist’s Texas debut at Fort Worth Contemporary Arts (through Oct 10). Dipped in wax, Sandra Vásquez de la Horra’s drawings are simple yet bold, familiar yet surprising. 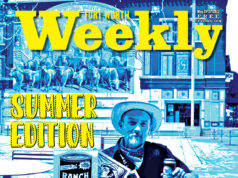