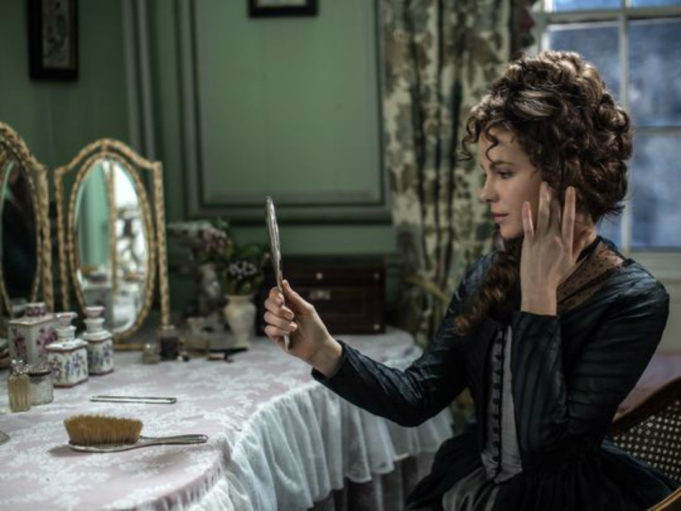 Sometimes you need a vacation to step away and think. I recently took a week of personal time and found myself pondering Kate Beckinsale (and the fact that I haven’t done one of these Considering pieces in a while). Of course, the more proximate cause was her delivering one of her best performances in Love & Friendship, which I raved about before I left. The career of this relentlessly photogenic star has undoubtedly been lucrative, but I look back and can’t help but feel there was a road not taken here.

Born in 1973 in London, she was studying French and Russian literature at Oxford when Kenneth Branagh cast her as Hero in his star-laden 1993 adaptation of Shakespeare’s Much Ado About Nothing. She didn’t do much with the part, but then, I can count the actresses who’ve made something of that character on one hand. Her real breakthrough came three years later when she starred in Cold Comfort Farm, an adaptation of Stella Gibbons’ novel about an orphaned London girl in the 1930s named Flora Poste, who’s forced to stay with distant relatives in the countryside and winds up rejuvenating the gloomy country folk around her with her big-city sophistication. It’s a bit of a challenge to make a heroine likable when she tells her guileless country cousin, “You shouldn’t say ‘It will be fun.’ You should say it will be amusing or diverting,” but Beckinsale pulls it off, whether by doing slapstick as when Flora is climbing into the back of a cart or by projecting cool as in a scene when she enters a hostile room and says unruffledly, “I don’t suppose anyone brought sandwiches.” Most of all, she captures how Flora sees a way forward for other people that they don’t see for themselves. (The movie is also notable for containing the funniest performance of Ian McKellen’s career as a fire-breathing preacher.)

Still, she was even better at playing smart girls who deluded themselves into thinking they were smarter than they were. BBC tapped her to play Jane Austen’s Emma in a TV adaptation, which led to her being cast in Whit Stillman’s The Last Days of Disco, a thinly disguised version of Austen’s Mansfield Park transported to 1980s New York. She’s cast here not as the lead but as the foil to Chloë Sevigny’s shy, reticent heroine, and Beckinsale plays the hell out of this 24-year-old who’s dead certain that she has the world figured out. (Stillman actually includes a callback to The Last Days of Disco in Love & Friendship. The scene where Lady Susan treats a guy on the street like a stranger and then reveals that she knows him well recalls the scene in Disco where she accuses a random guy of groping her on the subway. They both happen in front of Sevigny, too.) I discussed this performance further in my DVD review of Stillman’s 2012 movie Damsels in Distress, but in that movie you can see Greta Gerwig playing a similar character with similar Stillman-like stylized dialogue and falling on her face with it. Playing someone like this isn’t as easy as it looks. The Last Days of Disco was Beckinsale’s first of many roles to show off her American accent, and I remember seeing the film in 1998 and thinking, “Wow!”

Of course, things took a left turn after that. She snagged the female lead in Michael Bay’s Pearl Harbor, and while she apparently didn’t have the most pleasant time, it was the start of her Hollywood turn. The lead role as a werewolf-killing vampire in Underworld came two years later. She looked spectacular in the one-piece leather outfit and slid easily into the part of a born aristocrat who’s more comfortable doing the dirty work, but the role tamped down her natural effervescence, and it has now consumed her time where she’s currently working on the fifth (!) Underworld movie. (On the other hand, she did get a new husband out of the series, leaving her then-husband Michael Sheen for the first film’s director, Len Wiseman. Their marriage is still apparently going strong.)

Aside from that, she was indistinct as an object of bisexual desire in the indie music comedy Laurel Canyon, as a conventional romantic comedy heroine in Serendipity, and as that most thankless of roles, Adam Sandler’s wife, in Click. There was a blip in the mid-’00s when she seemed to be getting back to more serious roles, giving gravity to the part of a grieving, embittered mother in the slasher flick Vacancy and tragic import to the doomed housewife in David Gordon Green’s underappreciated Snow Angels. However, she quickly sank back into playing supporting roles in tepid thrillers like Contraband and the Total Recall remake. Her parts in those were small enough to allow her to escape much career damage when they failed. Still, the movies she has done in this decade aren’t exactly God’s plenty: Stonehearst Asylum, The Face of an Angel, The Trials of Cate McCall (which went straight to TV). Amid this, Love & Friendship looks like a lifeline.

Why doesn’t she act in French? She’s apparently fluent in four languages and even starred in a French-language film called Marie-Louise ou la permission early in her career, which I haven’t seen. God knows that France and French cinema aren’t free of sexism, but they have allowed Beckinsale’s Francophone compatriot Kristin Scott Thomas to play a wide range of roles well into her 50s. A move might expose her to a better class of director who can see past all the baggage from her career to date.

Better yet, why not just embrace the nastiness for comedy purposes? Intelligent, gorgeous, and skilled at playing women who get their way by charming people or outright lying to them, she could make a formidable comic villain. Couldn’t you just imagine her crushing the Rose Byrne role in Bridesmaids? Yet another reason to cherish Love & Friendship is that it shows its star a way forward in her career, if she’s willing to take it.