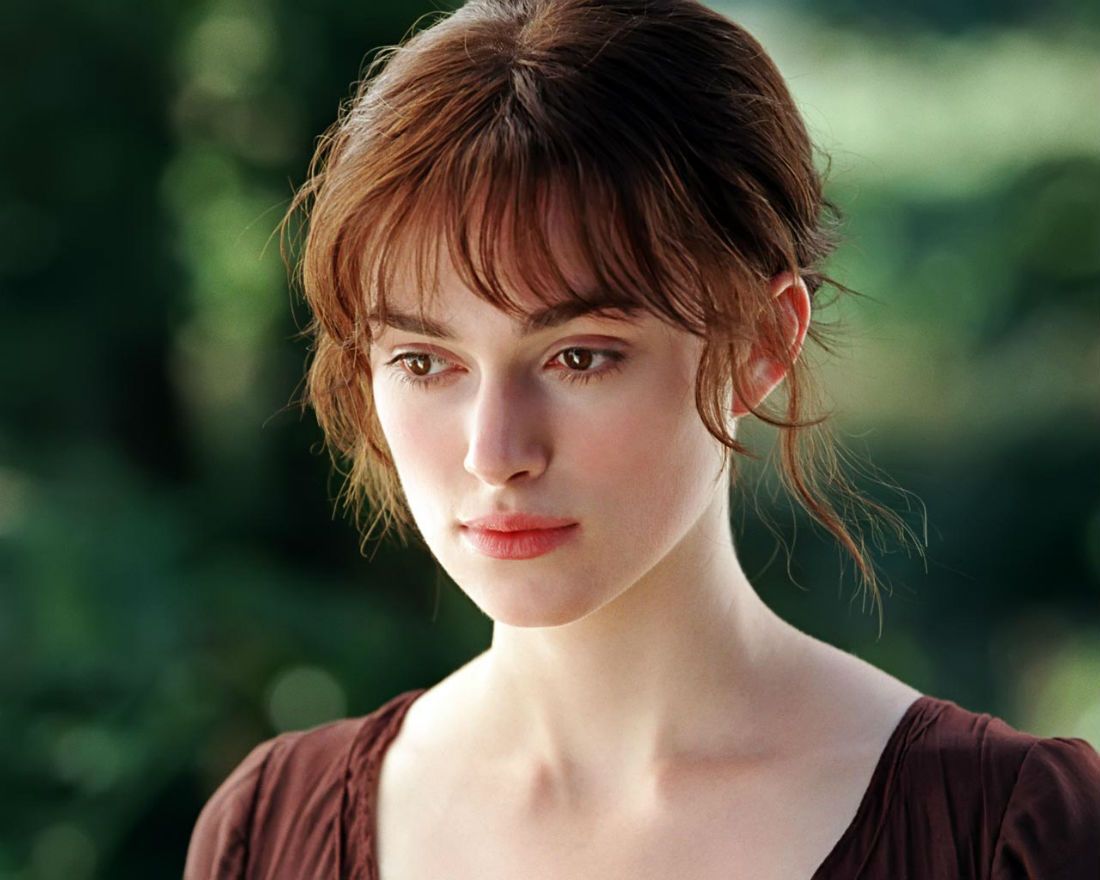 I mentioned in my review of Begin Again that I’ve never been the biggest fan of Keira Knightley’s up until now. With that movie now playing at AMC Parks in Arlington (having opened yesterday), I thought I’d have a look back at why I’ve missed the Knightley bandwagon.

She made her film debut at age 10 in an erotic thriller called Innocent Lies. (She played a younger version of the protagonist, played as an adult by Gabrielle Anwar.) Four years later she had a small role in Star Wars: Episode I — The Phantom Menace as a lady-in-waiting who also serves as a double for Natalie Portman’s Padmé. Reportedly when the two actresses were in makeup for their roles, their own mothers couldn’t tell the difference between the two. She also played Rose Maylie in a TV version of Oliver Twist, which I haven’t seen, though it does have Andy Serkis as Bill Sikes.

Of course, most people first got to know her in the 2003 British soccer comedy Bend It Like Beckham, which became a runaway hit with an American audience who, back then, mostly had no idea who David Beckham was. Looking at that movie again, the first thing I notice is that the white girl who played the best friend is the one who became an A-list movie star while the brown girl who played the heroine didn’t. (The same thing happened with the 1991 Australian movie Flirting. I’d like to think that this is only a coincidence and race wasn’t a factor, but I wonder. By the way, Parminder Nagra has become a TV actress, featuring as an ensemble player on the last six seasons of ER and now The Blacklist.) Knightley doesn’t make a convincing soccer player, but she is good as the body-pierced, fun-loving tomboy whom Jules Paxton is off the field.

That role made her known, but for a long time it also stood as a road not taken. The next two years saw her as the female lead in the Pirates of the Caribbean series, Guinevere in King Arthur, and Elizabeth Bennet in Pride & Prejudice, and the die was pretty well cast for her as the lead in period pieces, often in whalebone corsets, always for male directors (especially her Pride & Prejudice director Joe Wright, a partnership that continued into Atonement and Anna Karenina without bearing much fruit). I didn’t find her all that interesting in these roles. She always looks constrained in these movies, afraid to crack a smile, playing in these movies because she’s a Serious Actress and these are the kinds of the projects that they’re supposed to do.

She did try more contemporary stuff, playing an American femme fatale in The Jacket, a bounty hunter in Domino, and a music geek in Seeking a Friend for the End of the World, but all those movies were misbegotten in some way, and none of her performances ever quite took. I’ve seen her do good work, but it always seemed to be in movies that I didn’t care for. In the science-fiction allegory Never Let Me Go, she outshone Carey Mulligan and Andrew Garfield as a clone grown for spare parts, but she couldn’t give any spark to that arid, joyless British film. The fiery speech she gave in Pirates of the Caribbean: At World’s End momentarily woke me up, but it came long after I had checked out of that series.

Maybe it just boils down to this: Begin Again is the first time she’s given a performance that I like in a movie that I like. She seems to know this songwriter in a way that she doesn’t know Anna Karenina, and the confidence seems to leave her free to unleash her personality. She also made a good impression on me in this year’s Jack Ryan movie, where her American accent was much improved from the Jacket, and where she gave her role a snap beyond what was required. Her next film is Laggies, a dark comedy by Lynn Shelton, who’s a talented filmmaker not afraid to cast actresses against type (see: Ellen Page as a nervous, insecure girl in her Touchy-Feely), and she has Knightley as a slacker who runs away from a marriage proposal and befriends a 16-year-old girl played by Chloë Grace Moretz. I’m far more interested to see her in that than in her other upcoming films, the Alan Turing bio The Imitation Game and the mountain-climbing drama Everest. If she starts seeking out more roles that suit her and taking fewer Oscar-bait roles that someone else thinks she ought to be playing, I think her career will go much better.

On Begin Again, she didn’t have to go far for music lessons; her husband James Righton plays for the band The Klaxons. The movie’s protagonist was originally supposed to be played by Scarlett Johansson, which explains the character’s Scandinavian name of “Gretta.” Casting her opposite Mark Ruffalo would have made for a neat little reunion of two actors from The Avengers. I have to say, though, while I like Johansson’s acting a lot, I don’t like her so much as a singer. I prefer Knightley’s voice.