OK, so Ocean’s Twelve came out two and a half years ago, and a lot of ticket-buyers felt as if the thieves on the screen had robbed them of their eight bucks. 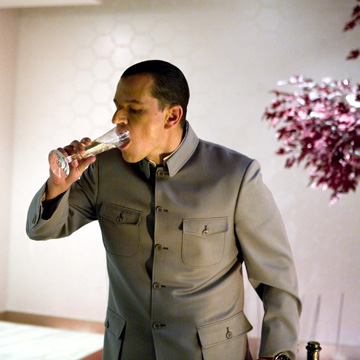 I didn’t share in the sentiment; then again, I didn’t have to pay to see the sequel, and I brought in low expectations. The public disenchantment must have filtered back to Messrs. Soderbergh, Clooney, and company, who seem to have taken it to heart. Unlike its predecessor, Ocean’s Thirteen does not feel like a half-assed job. It’s not fantastic, either, but it’s a much better bet than any of the other Hollywood sequels currently out there. The gang gets back together when fatherly financier Reuben Tischkoff (Elliott Gould) suffers a near-fatal heart attack, brought on when his business partner Willy Bank (Al Pacino) screws him out of a majority stake in their new hotel/casino. Danny Ocean (George Clooney) and the other thieves vow to avenge their fallen comrade by sabotaging the opening of Bank’s establishment, aiming to rig all the games so that every gambler on the floor wins a massive jackpot. In a financial pinch, the gang turns to old nemesis Terry Benedict (Andy Garcia) to make the dream happen.

Benedict turns out to despise Bank, which is no wonder since Bank essentially is Benedict with a big dose of Donald Trump’s megalomaniacal lust for publicity and his patently fake hairstyle. Benedict’s seed money comes with a big string attached, as he demands that the gang steal Bank’s gigantic and heavily protected collection of diamonds as well as giving him a 100 percent return on his investment. The new blood in this third installment arrives in the form of screenwriters David Levien and Brian Koppleman, the duo best known for DELETEing the cult-favorite poker drama Rounders. They do a much better job than was done in Twelve of manufacturing enough business to occupy all 11 of the thieves, plus other subsidiary characters. (They’re helped by the absence of Julia Roberts and Catherine Zeta-Jones.) Shaobo Qin does his gymnastic leaps in a series of elevator shafts, while Eddie Izzard does some crisp work early on as a security-systems expert, something he wasn’t given a chance to do in Twelve. Carl Reiner does an enjoyable turn as an effeminate Englishman with a tiny dog, and there’s an engagingly out-of-left-field subplot about the Malloy brothers (Casey Affleck and Scott Caan) infiltrating a Mexican dice factory and turning into labor organizers — an unlikely development made even less likely and somehow funnier by Affleck’s awful Spanish.

These bits notwithstanding, Levien and Koppleman aren’t as good at writing comedy as their predecessors, and that’s a problem. The most memorable parts of Eleven were the zesty, theatrical little cons within the big con — Matt Damon and Bernie Mac’s fake racial confrontation, Reiner’s impersonation of a Slavic mob boss, the bought-off bodyguard pretending to give Danny a beating. The disguises here don’t play anymore, with the exception of Matt Damon’s false nose, and the fraudulent personas that the thieves assume (Brad Pitt as a long-haired seismologist, Don Cheadle as a jumpsuit-clad motorcycle stuntman) have lost their pop. The running subplot in which the gang ensures a miserable stay for the writer reviewing the hotel (David Paymer) doesn’t fulfill its comic potential. The major new players don’t add much, either; Pacino does his usual hammy shtick, and Ellen Barkin as Bank’s No. 2 person isn’t given a chance to do much except look great in red dresses. The scene where Damon’s Linus Caldwell tries to seduce her comes to surprisingly little.

Despite the malfunctioning of most of the comedy bits, none of this prevents the overarching plotline from working. Most of the action is confined to the casino, which works to focus the storylines and keep things from wandering too far off. The various subplots converge with a convincing number of hitches toward the larger goal. Actually, a second viewing will probably be needed just to determine if everything tracks. Still, it’s pretty clear that the filmmakers took some pains over the details of this caper. If Twelve found the Ocean gang in danger of going the way of the Rat Pack and growing progressively lazier, Ocean’s Thirteen sees them buckling down and getting closer to their best.