To get where they are now, as the heads of a recently founded full-service indie label, twentysomethings Zaq Bell and Jarrett Vamvakidis have been through a lot of twists and turns, from local music to semi-pro baseball and a few points in between. 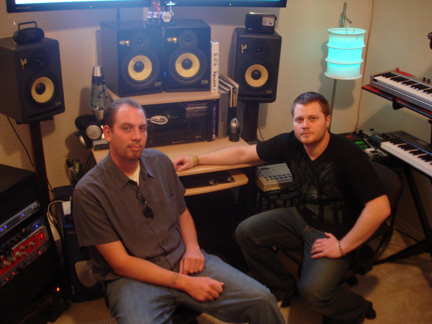 Bell grew up in West Fort Worth and had a fairly typical North Texas upbringing. He played baseball in high school and college and might still be playing if not for an injury. Vamvakidis also grew up around here; he’s both a fan of local music and the holder of a business degree from Texas Christian University. The two met by chance a couple of years ago through a mutual friend. At the time, Bell was an aspiring musician who had graduated from Dallas Sound Lab – one of the most prestigious recording and production schools in the country – and was working at a local watering hole.

Vamvakidis, the director of finance at Tile, Marble, and Granite Works of Fort Worth, had started his own entertainment promotions company. The two hit it off thanks to their shared desire to “open up the local scene and support all kinds of music, of any genre,” said Bell. The two decided on the name Fusion to represent their willingness to work with various genres.

In 2006 in the former Bank One Building, now The Tower, Bell and Vamvakidis opened the moderately sized Tower Studios, with money from their day jobs. Things started out slowly, as they do for most small businesses, but the duo’s reputation as quality engineers who offered fair prices grew and helped generate more business. After about a year, when the studio had outgrown its space, Vamvakidis bought a two-story house in North Fort Worth – remodeled, it is now his home and the studio’s new location. They named the studio after the street address, Braewick Drive Studios. Their first session there was last July.

Fusion has now expanded to encompass a record label with an unnamed hip-hop imprint, a promotions company (Fusion Promo), a full-service staff of off-site graphic artists (including art director Chase Hargrove, the lead designer for the Texas Rangers and Dallas Stars) and photographers (including Rashard Debney, who has shot for BET.com and Hot Import Nights car shows), a booking agency, and even a licensing division that has already begun marketing the company via several short films on YouTube.com. “I want everything about this thing to feel like family,” said Vamvakidis, who noted that several employees are friends. “I’m Greek, and that familial feeling is important to me. I mean, this is my passion.”
All of the new faces in Bell and Vamvakidis’ operation have made themselves at home, especially Jason Eitel, assistant engineer and the head of Fusion’s hip-hop branch who recently moved to Texas from Seattle. He was looking for work restoring old cars when he came across an ad for a hip-hop engineer/producer. Bell and Vamvakidis were impressed by his work with local Seattle rap and R&B groups.

With a mostly veteran staff on board and a top-notch studio, Bell and Vamvakidis began searching for new and established talent. Their first finds were Uzi and Warchild, two young local rappers. Based on a few rough mixes of the pair’s forthcoming album, Radio Rebellion, Uzi and Warchild are not your typical rap duo. The musical hooks and beats are completely infectious, and the rappers’ differing styles – one is loud and staccato, the other low and melodic – seem tailor-made for each other. One local muso who doesn’t want his name used heard rough mixes of Radio Rebellion and was blown away. “It reminded me of the first time I heard something as original as Outkast,” he said. “Just phenomenally original. I just can’t believe this album won’t do something huge.”

Last fall, around the time the rap sessions started, Bell convinced The Burning Hotels – longtime friends and arguably the biggest local indie-rock band around – to make part of their second record at Braewick. “I was ecstatic that the Hotels started doing their follow-up with us,” Bell said. “I don’t think you can do much better than them right now.” Bell thinks the sessions have been productive and represent a new, more dynamic direction for the band. Fusion’s work isn’t limited to Uzi and Warchild and The Burning Hotels. Past projects have included a diverse roster of acts, like Turan (formerly Sleeplab), Shuttle, Jeff Price, and Dallas hip-hop artists Mr. Pookie and Mr. Lucci. “We’ve been blessed with the talent that has already come through our doors, and that, of course, has led to even more great bands lining up to come in and record with us,” Vamvakidis said.

That list of upcoming bands currently includes local loud rockers Stella Rose, the jazz-heavy Villain Vanguard, the all-electronic outfit Sleepervisor, and former Austinites-cum-Los Angelinos Oliver Future. Bell also plans to record his band, The Shadow, at Braewick. Bell will be pretty busy – actually, almost impossibly busy – considering he was recently hired as a clubhouse manager for a Triple-A baseball club in New Orleans that is part of the New York Mets’ farm system. Even though the job is full-time during the spring, summer, and early fall, he will travel back and forth between New Orleans and Fort Worth to work on Fusion projects. Fusion also has some non-recording-related irons in the fire. “I want to develop the booking aspect, certainly,” Vamvakidis said. “But I also really want to push this promo company. I want people knowing about our artists’ shows and releases but also just that music is alive and kicking in Fort Worth.” He’s also considering putting on some sort of outdoor concert. “This is it for me,” he said. “I don’t want to sound like I’m putting all of my eggs into the Fusion basket, but I guess I am. It’s what I really see myself doing for the rest of my life.” Bell has similar plans. “My dream is to grow this into my only career,” he said. “We all want families some day, but I want to be able to go home to mine from here. Not any other job, not even baseball. This is it.”