To the editor: Thank you for reporting on the payroll audit mess at the Fort Worth school district (“Payroll Hell,” Jan. 20, 2010). It’s not over, unfortunately.

Also, you’d think he would have sent the audit to all members of the audit committee … but he didn’t.

You would think the appendices to the audit would be available so the findings could be examined in further detail … but no, they aren’t.

You would think the board members who serve on the audit committee would have come to discuss the findings … but, again, no, they didn’t show up for the meeting. There wasn’t a quorum, so no meeting was held. Internal auditor Sherman Harris says the annual external audit of all operations will be published on Jan. 26. It will, he says, identify major problems.

You’d think the audit committee would meet to review these major findings. Hatch’s response? No more audit meetings for three months. He says he has “a lot on his plate” and will review recommendations for the committee’s charge “later.”

Board president Ray Dickerson is correct that although the public will forgive mistakes, they won’t forgive a cover-up. Yet the firing of those individuals who pointed out problems before the new system “went live,” together with the audit committee’s refusal to examine the report – their failure even to meet! – is troubling.  It seems to me that the school board hasn’t gotten its teeth into this problem.  They need to.

Editor’s note: Sutherland has announced she will run against Hatch in the May school board election.

To the editor: Steve Watkins’ nostalgic story about the old Swift and Company meat packing plant (“Swift Changes,” Jan. 13, 2010) was a true “down the memory lane” piece – a tribute to the past and a blueprint for the complex’ resurrection as a future tourist attraction.

The plant spanned two centuries. The buildings have withstood the test of time, wrecking balls, and two fires. So much could be done and accomplished with these 22 acres, including the underground passageways. The addition of restaurants, condos, entertainment, and possibly a park would turn the area into a multi-use endeavor and bring additional revenue to Fort Worth.

The Stockyards were declared a National Historical District, and the same designation would be fitting for the old Swift and Company. With its proximity to the Stockyards, tourists will be flocking to this piece of history that’s just a stone’s throw away.

A Steaming Cup of Frac

To the editor: “The Nightmare Underground” (Static, Jan. 20, 2010) hits a home run in reporting. Perchance members of the U.S. House of Representatives would take on the challenge and volunteer to sample this frac “water” that they have failed to monitor for human safe-drinking qualities. As long the laws provide exemptions, loopholes, and bribes for these oil and gas companies, they will continue to put our lives and health in constant peril. When will Congress wake up and smell the coffee? Especially when it’s laced with fraccing contamination.

In last week’s story, “Payroll Hell,” Frances Saperstein’s first name was reported incorrectly, due to erroneous information provided by the Fort Worth school district. Fort Worth Weekly regrets the error. 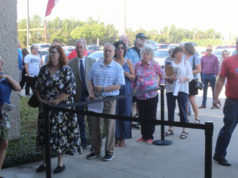 To Limit COVID, the Jail Should Try Decarceration