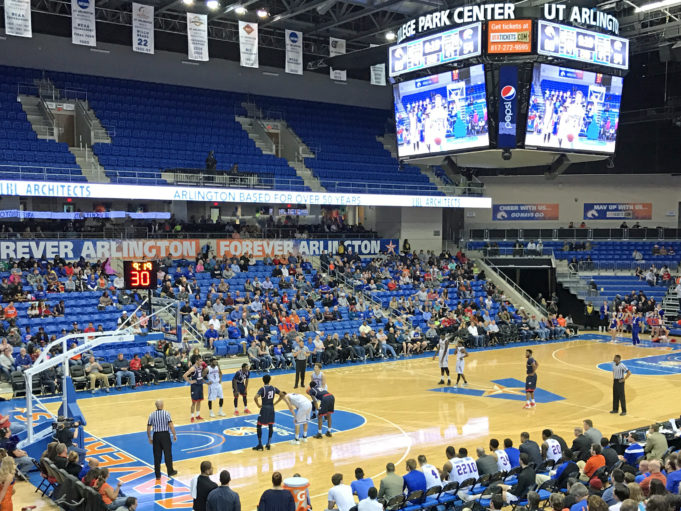 Wow. All of a sudden, basketball is a big deal.

OK, it’s one of the world’s most popular sports, but this area has not necessarily been a college basketball nexus. Until now.

An upset of top-ranked Kansas in the Big 12 tournament, which Texas Christian pulled off Thursday should make one sit up and take notice. Have you checked out Texas-Arlington? How about Southern Methodist? There have been a lot of balls ripping nets this year. If you haven’t been paying attention, the local men’s college basketball teams have been making some noise all season. Historically so, in fact.

TCU lost to eventual champion Iowa State in the Big 12 semis. UTA won the Sun Belt regular season before falling in the tournament semi-finals. SMU won the American Athletic Conference regular season and tournament. Among the area’s Division I teams, only Denton’s University of North Texas had a subpar year, finishing 8-22.

The Frogs, Mustangs, and Mavericks will all take part in the postseason. SMU earned a number six seed in the NCAA Tournament, playing Providence or the University of Southern California on Friday afternoon in Tulsa on truTV. TCU will host Fresno State in the National Invitation Tournament at 7pm Central Wednesday. That same time night at 10pm Central, the UTA Mavs have an NIT first-round matchup against Brigham Young in Provo, with the game televised on ESPN2.

Each team has had good seasons in the past, but one can make the case that the area has never before had so much success in the sport all at once. The NCAA and the NIT are the top two postseason tournaments in men’s college basketball, and the North Texas region has participated sporadically. In the 1950s, when UTA was still a two-year institution called Arlington State College, SMU and TCU both had some good teams, but never made it into the postseason at the same time (though there were fewer berths available in those days). The two Southwest Conference schools again posted some winning records in the 1980s, Texas Christian under coach Jim Killingsworth and Southern Methodist under the since-disgraced Dave Bliss. UTA played a game in the 1981 NIT under Bob “Snake” LeGrand. However, 1986 and 1988 were the only previous years in which as many as two local teams made the two big tourneys. In 1986, TCU was defeated by Florida in the second round of the NIT while SMU lost to BYU in the first round of the same competition. In 1988, SMU made the second round of the NCAAs before falling to Duke and UNT also lost to an ACC team, North Carolina, in the first round of the big tournament.

In 2012, UTA dropped a first-round game to Washington in the NIT while TCU made it to the second round of the third-tier College Basketball Invitational (a tournament won, incidentally, by current TCU head coach Jamie Dixon’s University of Pittsburgh team).

Never before, though, have we had three teams qualifying for end-of-season tournaments at once.

In addition to their postseason berths, all three teams have recorded wins over big-time opponents. TCU and UTA went a combined 3-0 against the University of Texas, though admittedly in a down year for the Longhorns. TCU beat Iowa State during the regular season. UTA defeated four NCAA tournament teams. SMU won 30 games, with no losses to teams not in the NCAA or NIT draws. Add to that the fact that Texas Wesleyan made the 32-team NAIA field (they play Cumberland Thursday) and it’s not hard to make the case that there has never been a better men’s college basketball season in North Texas.

So pay attention this week, and hopefully beyond, to the glut of area teams playing in the postseason tournaments. It doesn’t happen very often. Or ever.

On the other hand, the four NCAA teams expect to lose a total of only sixteen players off these rosters. And none of their leading scorers are seniors. So maybe we can expect the same next year. For basketball fans, that probably sounds like a pretty good deal.