It’s a safe bet that Texans guzzled a record volume of Fort Worth craft beer in 2018. Many of those aforementioned brews came from newcomer Cowtown Brewing Company, which set up shop in Rock Island (near downtown) last September, while others came from Fort Brewery and Pizza (the new-in-name-only brewpub that has called West Magnolia Avenue home for the last several years). As the proverbial clock ticks closer to 2019, this beer blogger felt highlights were in order.

Event wise, 2018 felt tame compared to past years. Maybe it was the absence of Index Fest (formally Untapped before disappearing from the 817 radar altogether). Panther Island Pavilion’s Oktoberfest did its part with a family-friendlier iteration last September. The three-day fest was the (warning: bad joke coming) wurst. North Texas Beer Week continues to grow but largely on the east half of North Texas. I missed the recent Beer Feast but heard it was huuuge. The folks at Flying Saucer moved their event to Sundance Square Plaza, where the event was originally hosted when said Plaza was a parking lot several years ago. Breweries continue to hold down the Fort when it comes to beer events.

Wild Acre Brewing Company grew its outdoor patio to include misting fans and expanded seating. Joe Riscky’s Barbecue cohabits the outdoor space now. My guest Brandon Pederson and I tried the new pils and double IPA Wild Acre had on draught and loved them. The brewery said goodbye to head brewer Mike Kraft recently. Rahr & Sons Brewery keeps locals guessing what they’re cooking, er, boiling up next. That wasn’t really the case five or six years ago when they were German bier stalwarts. Dadgum IPA, followed by Adios Pantalones and Paleta de Mango, has placed the venerable brewery in the “We can and will brew anything” category. Northside Panther Island Brewing Company grew over 2018. The space now serves wine, kombucha, and beer to-go. Imperial Sweet Fang, Tailgator, and other choice beers have more than doubled Panther Island’s offerings. The Collective Brewing Project has not-so-secret plans for making national waves with its funky, food-inspired sours and ales. Carly and Zane Taylor recently departed for a brewery in Montana and will be dearly missed.

Martin House Brewing Company now has an indoor taproom where you can count on new brews to be on tap. Of the approximately two million new beer releases Martin House had this year, my favorites were Kokytus (rye whiskey barrel-aged Imperial Stout with cacao nibs) and Parker County Peach, which was technically released last year. I’m still confused about the Magnolia Malt Liquor. Based on the fact that HopFusion is always packed, they must be doing something right. Or many things right. Macy Moore and Matt Hill still put in overtime. The beers are nicely balanced and cover the spread from Mexican lagers to barleywines. The brewery is truly a community space with regular events and plenty of non-alcoholic offerings. Some of the best IPAs in the world are coming out of Bedford, thanks to Turning Point Beer. Shannon Brewing Company, Rabbit Hole Brewing Company, and soon-to-open Brutal Beerworks top my list of breweries to visit soon.

Funky Picnic Brewery & Cafe, which plans to open its doors spring of 2019, wants you to get out. Get out for a picnic, that is. The owners will offer picnic-themed noshes along with new brews. Edgewise Eight Brewing will service Weatherford with award-winning brews in 2019, joining Parker County Brewing Company in giving Fort Worthians a reason to head west for great beers. My friend Eric Addison is still overseeing construction of Pathfinder Brewery in Hudson Oaks.

I planned to close by touching on the aluminum tariffs and Texas Craft Brewers Guild’s CraftPAC. Instead, I’ll mention what is well documented by Brewers Association and others. Craft breweries drive economic development and jobs growth. They enrich previously blighted neighborhoods and add character and culture to districts. The beer they make is great, but these men and women are also in the business of elevating the quality of life in our city. So cheers to them and cheers to Fort Worth. 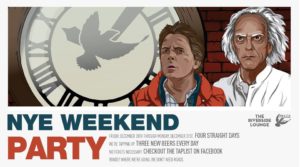 From Martin House: Yes, this Doc Brown drawing is cracking me up and Michael J has a sweet tan. Now, here’s the deets. We just couldn’t fit it all into one day so we’re going to party all NYE weekend in The Riverside Lounge. Starting Friday, Dec 28th at 4pm, we’re tapping up three special beers each day for the rest of the year. There will be food trucks Saturday, Sunday and Monday. We’ll be open regular hours each day and will even be open on Tuesday, Jan 1st if you can’t make it that weekend. Cheers! Visit the event page here.